American shoppers are being lured to Canada for discounts available because of the low loonie. 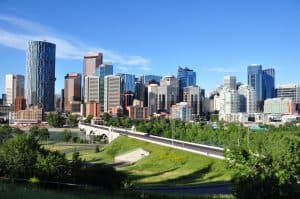 Meanwhile, fewer Canadians are moving in the other direction for the exact same reason.

Statistics show a 16 per cent rise in the number of Americans arriving in Canada in the first two months of 2016 compared to the same period in 2015.

But the number of Canadians going the other way has fallen nearly 15 per cent.

Significantly more Canadians make the trip south, but the numbers are set to become closer with the Canadian dollar likely to remain at current levels or lower for the foreseeable future.

Canadian dollar likely to remain at current levels or lower for the foreseeable future.

This has nothing to do with the so-call ‘Trump effect’, which saw internet searches on ‘how to move to Canada’ surge in the US recently.

Instead, the figures are driven by same-day trips, a key indicator that shoppers are driving the increase in numbers.

New Brunswick seems to be the major benefactor of the trend as the province traditionally receiving the most same-day trips from America.

Among all Canadian provinces, it has the fastest-increasing retail sales.

The Canadian dollar is currently hovering around 79 US cents, having dropped in January to as low as 68 cents, driven by plummeting oil prices.

And a loonie recovery is unlikely in the near future, with CIBC World Markets’ latest projections putting it at 75 cents by the end of this year and not much more by 2017.

“The best is likely behind for the loonie,” the CIBC report said.

“The Bank of Canada took aim at the currency in its most recent rate announcement by saying that the outlook for non-energy exports was weaker as a result of the stronger Canadian dollar, and it can be expected that the bank would use firmer language if the currency continued to gain ground on its US counterpart.”