August 9, 2017 – Americans are not getting the message they cannot bring guns across the Canadian border when they come here on vacation. 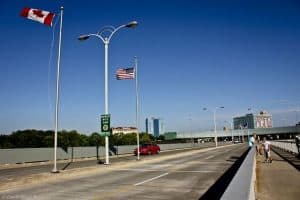 Canadian officials say it is difficult to inform U.S. citizens that guns are not welcome in Canada, while many that do know the law just lie about it anyway.

Six Americans have been charged with bringing guns across the border during summer 2017 in New Brunswick alone.

They tend to be otherwise law-abiding people who are just used to being armed. Fines of up to $2,000 have been issued by the Canadian authorities.

Officials say many are unaware guns are not commonplace in Canada. They also do not know they can legally declare their weapon and leave it at the border without facing further action. Broadly speaking, those tourists affected are aged over 60 and from southern America.

Despite travel advisories from the Canadian federal government and clear signage at the border, many U.S. tourists still lie about their weapons.

A Canada Border Services Agency (CBSA) awareness campaign launched in summer 2016 is designed to remind Americans that gun laws are different in Canada than in the United States.

“We welcome our U.S. neighbours in Canada — to make your journey more pleasant, travel light and always remember to declare all goods with you,” a CBSA statement said at the time the campaign was launched. “It is strongly recommended that you not carry your firearm when travelling to Canada and/or transiting through Canada to reach another U.S. destination. However, should you choose to travel with your firearms, you must declare all firearms in your possession at the first Canadian designated port of entry.”

Evidence suggests that a significant amount of the gun crime in Canada uses weapons that originated in the U.S.

The Canadian federal government recently agreed an information-sharing deal with the U.S.

Under the legislation, a log will be created of every traveller who leaves the country, primarily to close a security gap that has seen Canadians leave the country to join terrorist groups untracked.

Those exceeding the yearly limit face being considered a U.S. resident, and having to pay the resultant taxes. They could also lose their Canadian residency and access to health care, or be deemed an illegal resident in the U.S., which could result in being banned from the country for up to 10 years.