Annual Immigration Of 300,000 Leads To Largest Canadian Population Boost Since 1957 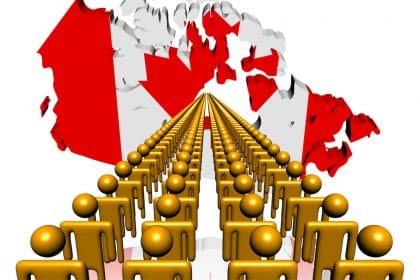 Statistics Canada says nearly 80 per cent of the population growth can be attributed to international migration.

“The 2017/2018 international migration increase was the highest ever measured in Canada’s history,” the Statistics Canada report said. “… the increase was fueled not only by a high number of permanent immigrants, but also by an important increase in the number of non-permanent residents.”

The figures are a major boost for the federal government’s policy of increasing immigration to offset a shrinking labour market caused by an aging population.

The Statistics Canada figures show a growth rate of 1.4 per cent, a figure not seen in approaching 30 years that means Canada is growing faster that many of its peers in the developed world.

Population Growth in The Provinces

Provincially, Ontario and Quebec saw the strongest population growth in nearly 30 years, at 1.8 per cent and 1.1 per cent respectively.

Alberta saw a growth rate of 1.5 per cent, representing its first upturn in population growth after four years of slowdown. This could mainly be attributed to an inter-provincial migratory gain of 1,438.

Three out of the four Atlantic provinces also saw increases, among the highest measured since the 1980s.

Prince Edward Island’s population grew 1.8 per cent, Nova Scotia’s grew 1 per cent, while there was 0.5 per cent growth in New Brunswick. Newfoundland & Labrador saw a decline of 0.6 per cent.

Strong gains in international migration were behind much of the provincial growth.

Aside from Newfoundland, Ontario, Saskatchewan and Alberta, the other provinces also saw numbers of non-permanent residents increase at an unprecedented pace.