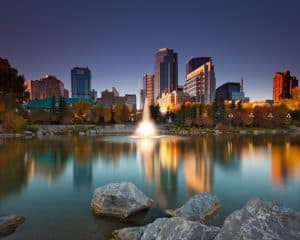 The number of people employed in British Columbia increased by 13,000 in April, giving it the lowest unemployment rate of all the Canadian provinces for the first time since comparisons began in 1976.

The latest figures from Statistics Canada show the western province, along with Newfoundland and New Brunswick, were the major gainers as Alberta and Manitoba both posted declines in a month that saw overall Canada-wide jobs fall by 2,100 when compared to March.

This was not enough to affect the overall unemployment rate, which still stands at 7.1 per cent after falling from 7.3 per cent from February to March, driven by a jobs boost of 40,600.

There was also a slight reduction in the number of self-employed workers.

Employment in Alberta declined 21,000 in April, although ther unemployment rate was little changed at 7.2 per cent, as the number of people participating in the labour market also decreased. Compared with 12 months earlier, employment in the province was down 37,000 and the unemployment rate rose 1.6 percentage points.

Employment increased by 13,000 in British Columbia, and the unemployment rate fell 0.7 percentage points to 5.8 per cent — the lowest rate among the provinces. This is the first time British Columbia has had the lowest unemployment rate among all the provinces since comparable data became available in 1976. On a year-over-year basis, employment in the province was up 110,000 (+4.9 per cent). A strong upward trend was observed throughout the 12 months, driven by growth in wholesale and retail trade, health care and social assistance, and construction.

While employment was essentially unchanged in Ontario, an increase in the number of people searching for work pushed the unemployment rate up 0.2 percentage points to 7.0 per cent. Compared with April 2015, employment gains for the province totalled 96,000 (up 1.4 per cent).

In Quebec, on both a month-to-month and year-over-year basis, employment was little changed and the unemployment rate was stable at 7.5 per cent.