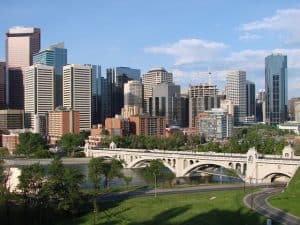 March 27, 2018 – Calgary is being urged to step up its immigrant integration efforts for the thousands of newcomers who settle in the city each year.

Numbers of newcomers to the Alberta city have risen from 4,000 15 years ago to a current annual level of 20,000. With the federal government planning to welcome a million new permanent residents under all program in the nest three years, Calgary’s share is only likely to grow.

Alberta immigration sat behind only Ontario and Quebec in welcoming the third most immigrants of any province in 2017, with more than 42,000 newcomers settling in the province.

This means an economy still recovery from the drop-in oil prices is faced with the challenge of integrating an increasing number of new immigrants.

The key issues were raised at the opening of the Metropolis Conference: Immigration Futures event happening in Calgary this week. It looks at ways to rise to the challenge of welcoming and integrating newcomers.

Number of Immigrants Accepted in Each Province In 2017

While there is broad acceptance Canada needs increased immigration levels to offset a shrinking labour market due to an aging population, getting those newcomers integrated quickly is an important challenge.

Immigration, Refugees and Citizenship Canada knows this, which is why it invests a significant amount of its budget into integration projects designed to get people working in jobs that match their international qualifications.

Experts say key areas for improvement include ultra-local level matching of newcomers with labour market needs. While the federal government gives the power to select a set allocation of immigrant numbers to Canada’s provinces, experts say a need exists for local governments to have their say.

Bringing in more immigrants with jobs lined up, improving recognition of international qualifications and allowing more international students to remain after graduation are all ways integration can be improved.

The challenge is to bring down the time new immigrants are a draw on Canada’s social support systems. There is a playoff between immigrants being an initial cost to society and the proven long-term economic benefits they provide.

Instead of dismissing those who want to see a decrease in immigration numbers, Canada would be better served to learn from the backlash experienced in the U.S. with the election of President Donald Trump, and in Europe with the Brexit vote and the rise of the far right in those jurisdictions.

Canada’s uniquely accepting multi-cultural outlook will help offset a similar movement gaining traction, but politicians would still be wise to exercise caution in a country where more than a fifth of residents were born elsewhere.

Ottawa plans to welcome 980,000 new immigrants over the next three years under an ambitious three-year immigration plan announced by the federal government on November 1, 2017. Annual immigration levels could rise to as high as 360,000 by 2020 under the multi-year plan. This would be first time in more than a century that the immigration rate is 1 per cent of the population.

The minister emphasized the need to expand efforts to integrate increased numbers of new immigrants and said there was a critical need to ensure the Canadian economy was able to absorb the number of immigrants welcomed.