Canada Among the World’s Happiest Countries 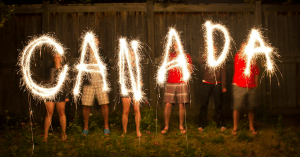 Finland came out first in a ranking that saw Canada placed seventh, and first among countries from outside Europe.

The annual report for the first time evaluates how happy immigrants are in each country, with Canada placing fourth for how well it welcomes newcomers.

Other key measurements included gross domestic product per person, life expectancy and how respondents to a survey rated their own happiness. The survey included questions on social support, freedom of choice, level of corruption in society and generosity.

John Helliwell, an economist at the Vancouver School of Economics at the University of British Columbia, and Canadian Institute for Advanced Research, helped compile the report.

He said: “Although immigrants come from countries with very different levels of happiness, their reported life evaluations converge towards those of other residents in their new countries.”

The report found that happiness of immigrants comes down to more than just money, as with the happiness of locals in a given country. While income is one of the measures used, the report found than simply moving to a country with higher incomes did not make people happier. Instead, feeling part of the social fabric of a country was more important.

Immigrants reported being generally as happy as natives of their country. This score can be affected by the happiness of the country an immigrant chose to leave, the report found.

Living In Canada Puts You In One Of World’s Happiest Countries (Audio)
Canada a Solid All-Rounder in Survey of Best Countries for Expats
Canada Second-Best Country For Immigrants: Survey

Countries which strike the right balance between being rich and providing social and institutional support came out on top of the survey, the report says.

Norway, Denmark, Iceland and Switzerland all featured in the top five. The U.S. was one of the major fallers in the 2018 report, dropping to 18th place from 14th in 2017.

Canada maintained its seventh place from a year ago, when its multiculturalism was highlighted as a key factor.

“Canada has demonstrated a considerable success with multiculturalism,” the 2017 report said.

“Highly diverse societies, such as Canada, have been able to achieve relatively high levels of social trust through programs aimed at promoting multiculturalism and inter-ethnic understanding,” the 2017 report said.