Canada Criticized For Response To Increased Numbers Of Asylum Seekers

August 10, 2017 – Canada’s reputation as a welcoming country for immigrants and refugees cannot be extended to asylum seekers, according to an academic in the field. 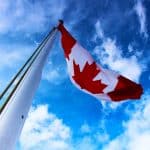 Vic Satzewich, professor of sociology at McMaster University, says little has changed between how Canada treats asylum seekers under the current and former federal governments.

Writing in the Globe and Mail, Satzewich said: “The sad reality is that Canada’s welcoming approach to immigrants and refugees comes at the expense of asylum seekers.”

The article comes at a time when asylum seekers are pouring across the border at a rate of 150 per day from New York to Quebec. However the article fails to undertake any comparison to other areas in the world where western countries are dealing with a far great influx of asylum seekers.

For comparison purposes, Italy with a population of 60 million, is currently receiving more than 12,000 asylum seekers per month, mainly
from North Africa. The problem is so great in that country, that Italian authorities are threatening to invoke war time measures that would entail
it passing legislation to hand out hundreds of thousands of temporary EU visas to asylum seekers which would allow the migrants to legally
travel north using a Brussels directive.

The situation is such that Montreal’s Olympic stadium had to be converted into a temporary home for claimants, who are believed to be mainly Haitians fearing for their status in the U.S. under Donald Trump.

Despite rhetoric from Prime Minister Justin Trudeau saying Canada remains open as Trump cracks down, Satzewich says that openness is only for a certain category of newcomer.

He points out that Trudeau spoke about maintaining the integrity of Canada’s immigration system and Immigration Minister Ahmed Hussen advised Haitians to stay in the U.S. and make their claim through the correct channels.

“Canada’s approach to asylum seekers pokes holes in the image of the country as inherently welcoming to immigrants and refugees,” Satzewich writes.

He added: “Maintaining the “integrity of the immigration system” is in part the shared code language for how our governments (Conservative or Liberal) think about asylum seekers.

“Canada may love refugees like Syrians who are selected and screened abroad before they set foot in the country, but the same cannot be said about asylum seekers who wash up on our shores in boats, or who walk across our border with the U.S.”

As Satzewich points out, Canada finds itself in a delicate position when dealing with matters related to Trump’s America.

However, with negotiations currently ongoing for the renegotiation of NAFTA, Canada will not want to do anything to harm its position. “I also doubt whether the Liberals are going to want to muddy the waters as we renegotiate NAFTA,” Satzewich writes.