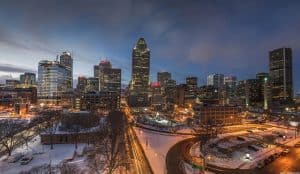 April 2, 2018 – The first quarter of 2018 saw a robust number of invitations under the Canada Express Entry system. Although the numbers were not quite as spectacular as 2017, this is partly explained by the likelihood that Immigration, Refugees and Citizenship Canada (IRCC) is continuing to draw insight into how to enhance this management tool.

The most striking feature of the 2018 quarterly review is the impact of past modifications combined with the recent change, which enables immigration authorities to set precise draw sizes. Instead of irregular numbers of Invitations to Apply (ITAs) being issued in the past, 2018 has seen two draws of 2,750 and four of 3,000. This has also resulted in the ability to manage immigration numbers in tandem with Comprehensive Ranking System (CRS) scores.

Thus, if more than one candidate has the lowest score in a draw, the cut-off CRS score is based on the date and time they submitted their Express Entry profiles.

A first quarter total of six draws is fewer than the seven seen in both 2016 and 2017, which also explains the slightly lower number of ITAs.

There are several factors to consider when assessing why 2018 has seen fewer ITAs than 2017 in the first quarter, especially when Canada is set to receive a modest increase in annual levels of immigrants in 2018 (74,900) than it planned for 2017 (73,700). The obvious assumption is that a bigger target should mean more ITAs, but this assumption is incorrect for the following reasons. 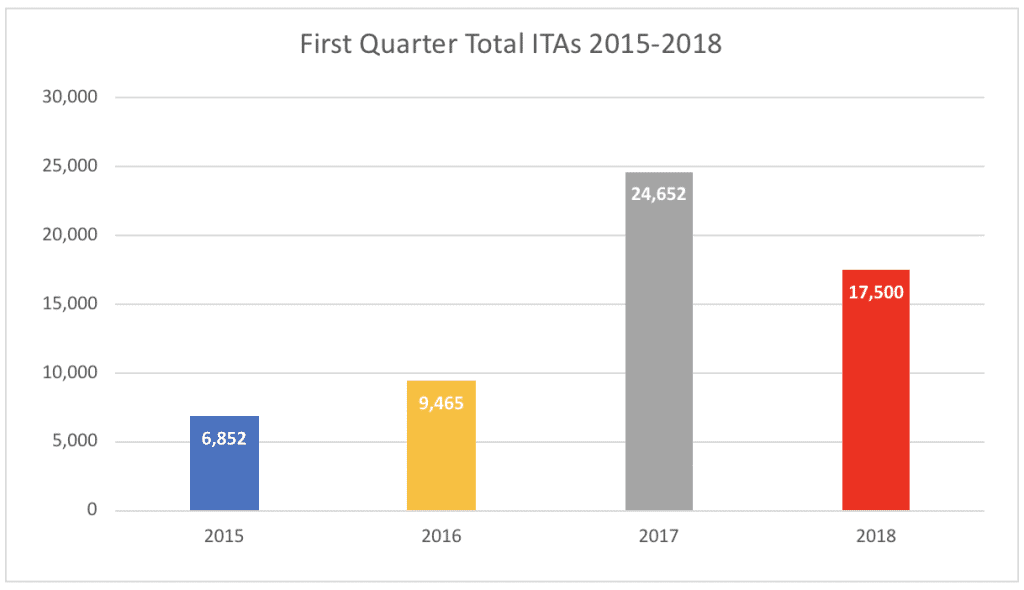 First, the number of immigrants welcomed in 2018 will feature many who were invited in the second half of 2017. Only IRCC knows how many applications are outstanding from 2017, but the processing target from the time of invitation is six months. 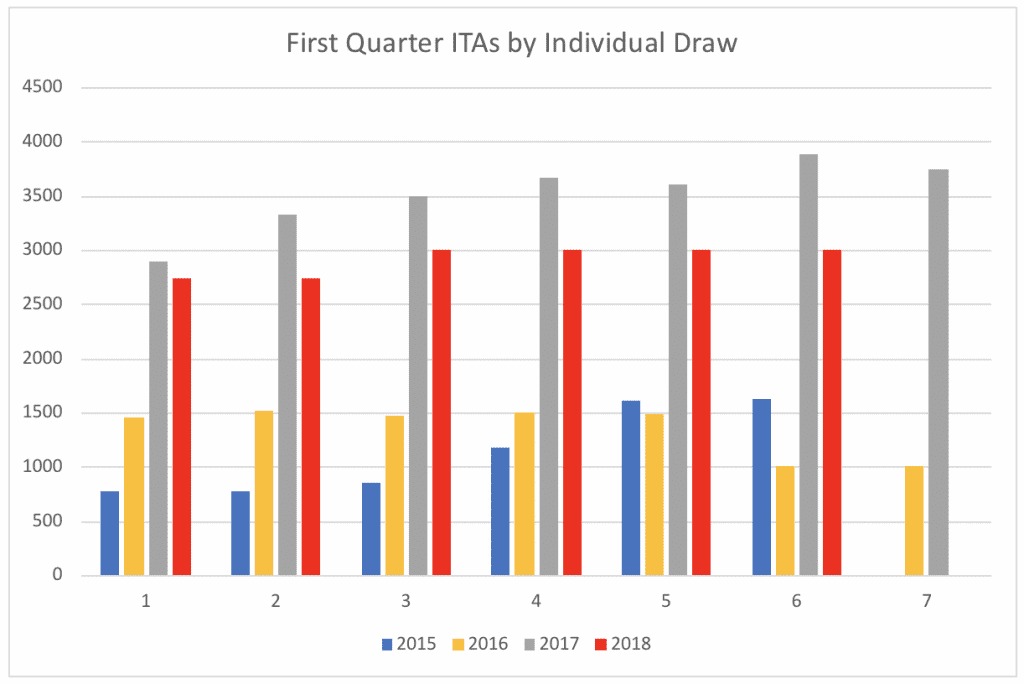 Finally, officials now have a wealth of data available on the number of invites they issue relative to the number of newcomers who actually submit a complete application. The drop-off factor is an important consideration when setting ITA numbers.

Looking at the ITAs issued by an individual draw again shows that the 2017 first-quarter draw was larger than the corresponding draw in 2018. However, the 2018 draws remain significantly higher than the first quarter draws in both 2015 and 2016, when Express Entry was in its infancy.

Despite the lower number of ITAs in the first quarter of 2018, the CRS scores have been lower than 2017 in several of the draws. This could be related to the modified format mentioned earlier, which is likely to produced a more consistent CRS score value.

In 2018, the CRS score has ranged from 442 to 456, giving candidates in the pool a tighter CRS score range they need to receive an ITA. In 2017, the range was between 434 and 468 in the first quarter. Both years produced lower first quarter CRS scores than 2016, while 2015 saw wildly fluctuating scores in the first few months that the system was operational.

Read our comprehensive guide on how to boost your CRS score here, and consult our Express Entry score matrixhere. 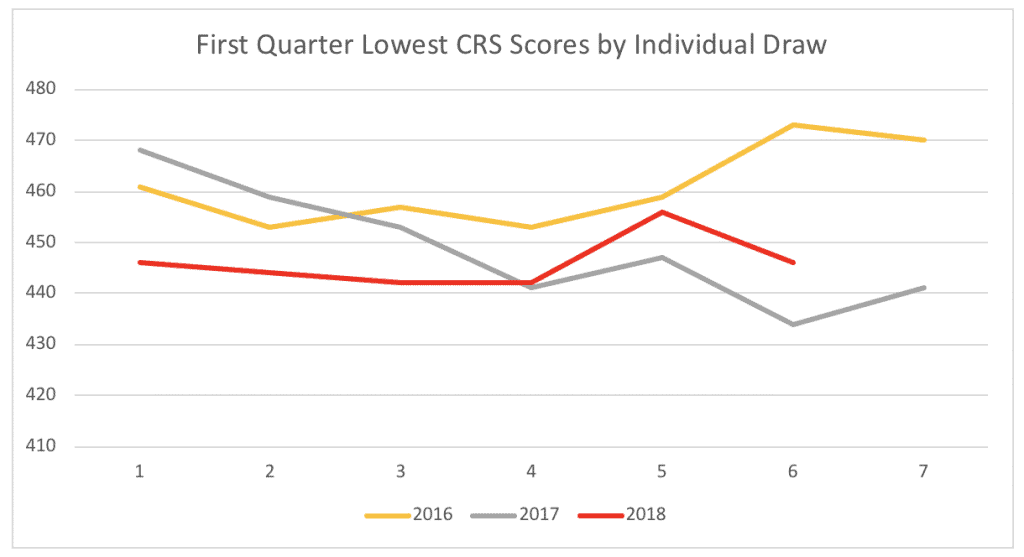 Note: 2015 CRS scores omitted to allow better comparison between the other three years

IRCC now provides regular snapshots of the make-up of the Express Entry pool, showing a breakdown of the number of candidates in the pool with CRS scores.  The latest draw saw a CRS cut-off of 446, with the snapshot revealing more than 6,200 candidates with scores in the range of 431 to 440, just below the required score.

The vital from these snapshots is that thousands of candidates are often within just a few points of receiving an ITA.  Maximizing a candidate’s available points is more important than ever. A slightly improved language test result, having all educational degrees evaluated, acquiring another year of work experience, obtaining an approved job offer, competing a period of study in Canada and the qualifications of a spouse are all important factors that can make the difference in receiving an ITA under Express Entry.

While this is obviously frustrating for many, it should also be a source of encouragement, that an ITA is just a few points away from being received.

To reach these levels, the numbers of candidates to be invited through Express Entry will need to steadily increase.

As Express Entry enters its fourth year, IRCC officials have the data and growing insight to know exactly where those ITA numbers need to be to ensure immigration targets are being met.

In 2018, stakeholders expect to see some individual draws increase beyond the current level of 3,000, perhaps to 3,250 and then 3,500. By the second half of the year, officials will start to consider 2019 immigration levels when setting draws.