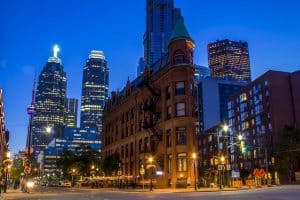 The rate fell by 0.4 percentage points compared to October and is the lowest Canada has seen since February 2008.

Over the last 12 months, the number of people in work has risen by 390,000, or 2.1 per cent, with all of the gains in full time work. Unemployment is now almost a full percentage point down on this time last year.

Provincially, Ontario recorded its lowest unemployment rate for more than 17 years at 5.5 per cent.

Young people, working age men and working age women all saw their unemployment rates drop, to 10.8 per cent, 5.3 per cent and 4.8 per cent respectively.

Provincially, Ontario was the biggest mover in terms of jobs added, with 43,500 more people in work. Canada’s most populous province saw its unemployment rate fall 0.4 percentage points to 5.5 per cent, the lowest since July 2000. It has now added 181,000 full time jobs in the last 12 months, a gain of 2.6 per cent.

Quebec, meanwhile, was a big mover in terms of unemployment rate, dropping 0.7 percentage points to 5.4 per cent after adding 16,000 jobs in November. The unemployment rate for the French-speaking province is at its lowest since 1976, when comparable records began. Some 78,000 jobs have been added in the last 12 months, a rise of 1.9 per cent.

The biggest provincial mover in terms of unemployment rate was Prince Edward Island, where an addition of 1,400 jobs saw unemployment sink 1.5 percentage points to 8.8 per cent in Canada’s least populous province. The Island has now added 2,500 jobs in the last 12 months, r arise of 3.5 per cent.

Meanwhile, the private sector saw an increase of 72,000 jobs in November, while public sector and self-employed figures were little changed. All three show gains over the last 12 months, of 218,000, 88,000 and 85,000 respectively.