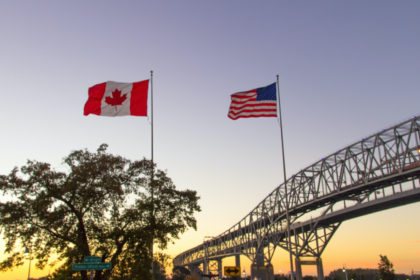 2019-12-18 – U.S. border officials in Canada can carry guns, conduct strip searches and record and keep passenger information under amendments made earlier in 2019.

It means Canadians travelling to the U.S. need to be aware of what they can legally be subjected to while on Canadian soil.

The pre-clearance zones are intended to allow Canadians to complete border checks before travelling to make trips more efficient.

Canadian border agents working on U.S. soil have the same powers. However, as yet there are no Canadian border pre-clearance centres in the U.S. They are deemed not necessary because of the relatively few Canadian airports receiving travellers, making the screening job much easier.

However, there are some serious concerns about the powers afforded to American agents in Canada.

As well as carrying guns and conducting strip searches, U.S. officials also have the power to override decisions made by Canadian border agents.

It means that even if a Canadian official is ‘unwilling’ to search or detain a subject, an American can go ahead and do it anyway.

Another concerning new power allows the U.S. border agent to deny a Canadian’s right of withdrawal.

Before the latest changes, if the Canadian did not like how they were being treated, they could walk away and choose not to enter the U.S., without being penalized.

After the latest changes, the agent can detain the traveller where ‘reasonable grounds’ exist.

Furthermore, a line in the agreement states that “no action or civil proceeding may be brought against a U.S. preclearance officer in respect of anything that is done or omitted in the exercise of their powers, or the performance of their duties and functions under the legislation.”

This suggests there is no legal avenue of action against anything a U.S. border official does while carrying out their duty.

With the anti-immigration tone set by the administration of U.S. President Donald Trump, it can only be cause for concern to give wide-ranging powers to U.S. border officials in Canada.