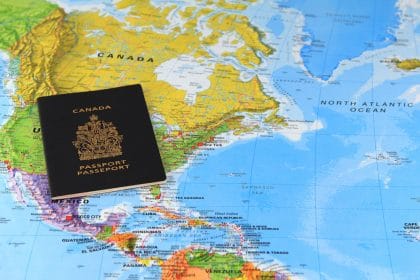 October 18, 2018 – The Canadian passport allows visa-free travel to 185 countries making it the world’s sixth most powerful, alongside Belgium, Switzerland and Ireland.

Comparable countries such as the U.K. and the U.S. have slightly more powerful passports than Canada, offering visa-free access to 186 countries.


The so-called ‘power’ of a country’s passport is indicative of its standing among the largest and most developed nations in the world.

Canada has recently added Mexicans, Romanians and Bulgarians to the list of nationalities it allows to enter the country without a pre-arranged visa.

When flying into Canada, holder of visa-exempt passports are required to obtain an Electronic Travel Authorization in advance of their travel.

Earlier in 2018, Canada’s federal government made important changes to passport rules with the aim of protecting children under 16 and preventing the document being misused.

Key changes include giving power to the Canada immigration minister to issue without the need for an application, or refuse to issue, a passport to a child, if they believe it is in the child’s best interest.

The minister can also cancel a child’s passport if they believe it is in the child’s best interest.

These changes come after the federal government implemented gender neutrality on passports and other immigration documents in August 2017.

Dual citizens must make sure they are aware of Canada’s passport rules.

Following the introduction of the eTA in 2016, dual citizens now require a Canadian passport to fly into the country.

When the new rule was introduced, Canadian missions all over the world were inundated with Canadian passport requests. Previously, dual citizens could use the passport of their other country of citizenship.

The eTA rules forced thousands of dual citizens to apply for a Canadian passport.