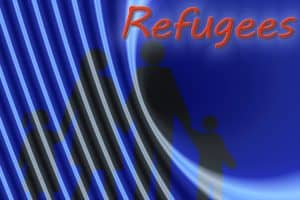 Canadians are equally divided over whether asylum seekers should be welcomed across the U.S.-Canada border, according to a new poll conducted by Nanos.

Some 37 per cent of people asked said asylum seekers should be welcomed, while exactly the same percentage said the border should be closed, with 26 per cent saying they were unsure.

Quebec has seen more then 12,000 asylum seekers cross the border from the U.S. so far, this year, already passing provincial expectations for the whole of 2017. The province has had to use every available space to house the newcomers, including Montreal’s Olympic Stadium and makeshift army camps set up at the border.

The people behind the poll at Nanos say they have rarely seen such an even divide on any issue among Canadians, prompting the need for a serious debate about border policy. The poll surveyed the opinions of 1,000 Canadians on August 30 and September 1.

It was a situation that began with asylum seekers braving the harsh winter in crossing both the Manitoba and Quebec borders. Then, during July and August, it became an almost exclusively Quebec problem, with thousands of Haitians fearing deportation from the U.S. streaming across the Saint-Bernard-de-Lacolle crossing point.

The motivation for the summer border crossers appears to be a result of misinformation. Donald Trump indicated he would end a U.S. special status program that has allowed Haitians to stay since the 2010 earthquake that destroyed huge parts of the country. The Haitians thought they would get special treatment in Canada, but the program here was wound up in 2016. Since Canada has been able to get that information across, the number of asylum seekers crossing the border has reduced significantly.2

Canada knows it needs to get the message out to all of these groups that they will not automatically received residency here. In particular, there are 260,000 Salvadorans in the U.S. who are due to lose their special status in March 2018. Together with the 800,000 left in limbo over Trump’s move to end protection for immigrants brought to the U.S. as children, and Canada’s need to get the correct information out there becomes even more apparent.

The stream of asylum crossing the Quebec border has reduced to a trickle in September, with under 50 per day now arriving after numbers peaked in the several hundreds during July and August.

Several temporary shelters were set up for newcomers, including one in Cornwall, Ontario, near the Quebec border. Others included Montreal’s Olympic Stadium, an old hospital and a school. A makeshift border camp was also set up by the Canadian army to act as an initial processing centre.