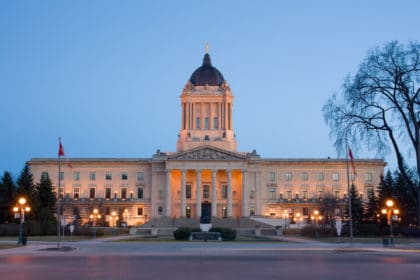 2020-04-05 – Canada Express Entry issued the fifth most Invitations to Apply (ITAs) for any quarter on record in the first three months of 2020, and the most for a first-quarter since 2017, despite the impact of the coronavirus pandemic.

The quarter also featured the largest draw in the history of Express Entry, with 4,500 ITAs issued on February 19.

Were it not for the uncertainty created by the battle against COVID-19, it was a first-quarter that laid a solid platform for a possible record number of ITAs in 2020. The current record was set in 2018 when 89,800 ITAs were issued.

Canada’s high-skilled immigration admission target for 2020 is 85,800, up from 81,400 in 2019. However, whether the targets set out in March’s immigration levels plan will be met has been thrown into doubt by the coronavirus crisis. 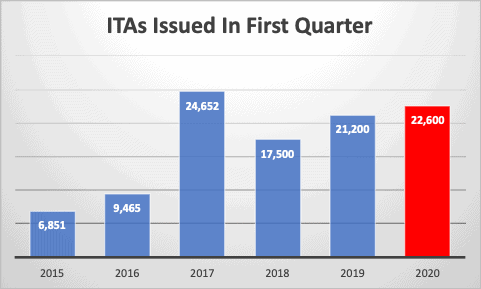 It showed that the Express Entry system was purring along nicely until the outbreak of coronavirus pitched Canada’s immigration into a period of instability. 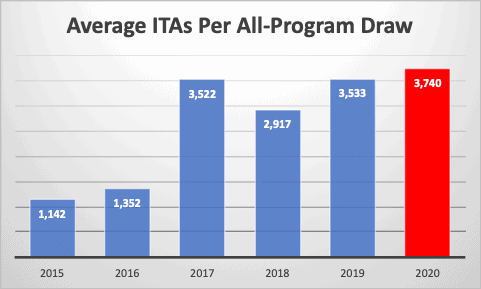 That record was set in the year Express Entry became the only federal route to skilled worker immigration to Canada. Before that, IRCC was clearing a backlog from the old first-come, first-served application system.

Once Express Entry was established as the exclusive pathway, immigration officials had to build up an inventory of profiles in the pool, which resulted in high draw numbers in the first two quarters of 2017.

Since then, the only quarter to get near the Q2 2017 total was Q4 2018, which came around the point the Liberal government ramped up immigration targets to in the region of 340,000 newcomers per year.

With officials now holding data on exactly how the numbers of ITAs issued translates to permanent resident arrivals in Canada, they are able to be much more consistent withdraw sizes.

Had it not been for coronavirus, the expectation would have been for consistently high quarterly ITA totals in 2020, possibly leading to a new annual record of ITAs. 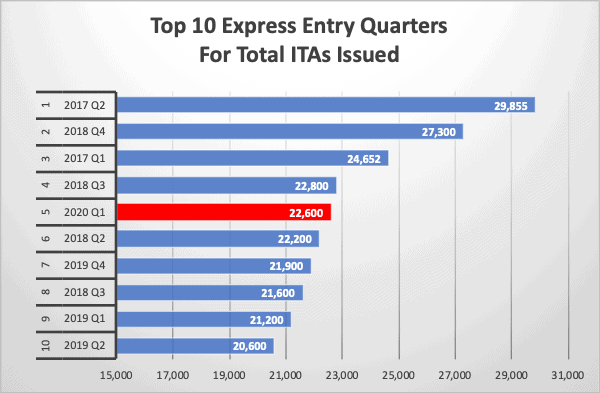 The chart below plots the CRS score for each first quarter draw from the last five years. The blue line representing 2020 clearly stands above the others, with CRS scores ranging from 470 to 473 for all-program draws during the first quarter.

It should be noted that the most recent draw featuring a minimum CRS of 467 was omitted from the chart as it was a program-specific draw aimed only at Canadian Experience Class candidates.

While the required CRS has been slightly higher in recent draws, it should also be noted it has been much more consistent. The previous four years saw wild differences in CRS from week to week, but 2020 has hovered around the lower 470s.

Candidates may be concerned by having to score more points to qualify for Canada immigration, but the consistency of minimum CRS at least gives them a clear target when submitting profiles.

The message is clear: if you can get your score into the 470s, you stand a much stronger chance of receiving an ITA. It means candidates can no longer miss opportunities to increase their CRS score, and should seriously consider taking action to increase their score while in the Express Entry pool.

An obvious caveat to this analysis is that coronavirus is a great unknown in terms of the impact it will have on CRS scores. It is not known when IRCC will conduct its next draw, but the total ITAs, minimum CRS and the programs the draw is aimed at will be an important indication of the path Express Entry is going to take during the COVID-19 crisis. 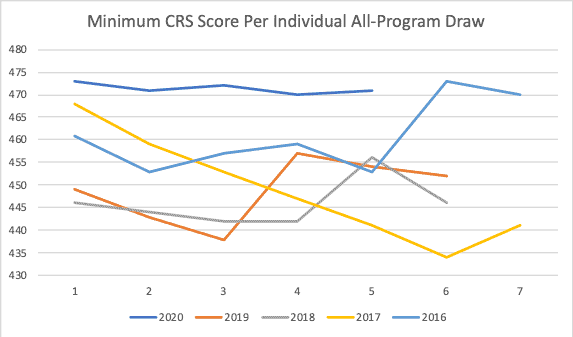 Express Entry In The Remainder of 2020

It has perhaps never been more difficult to predict what will happen in Canada immigration over the next nine months.

Clearly, the policies of immigration authorities will depend on how quickly Canada can bring coronavirus under control.

With border restrictions in place and flights cancelled all over the world, it looks impossible for Canada to maintain the flow of new permanent residents, particularly in the second quarter.

Perhaps numbers can start to increase again in the third quarter of the year, but with many citizens and permanent residents facing coronavirus-linked unemployment, the focus may be on getting those people back into the workforce.

Canada has policies in place to put the Canadian economy in the best place to recover as quickly as possible once the coronavirus pandemic is brought under control.

Immigration is set to remain a central part of that economic recovery.

Canada and its provinces have a stated commitment to draw on robust immigration to meet long-term economic growth. Canada will continue to feature robust immigration policies and it remains an important destination for those wishing to become part of its landscape.