October 2, 2017 – The third quarter of 2017 saw Canada’s Express Entry System move down a gear after the record-breaking numbers recorded in the first two quarters of the year.

However, the numbers still exceeded all quarterly figures for both 2015 and 2016, making it the third most prolific quarter in Express Entry history.

The quarter saw three draws inviting in excess of 3,000 candidates, which was unheard of before 2017 began. The minimum CRS scores were also consistently below 450, showing that although figures did not reach the extremities of the previous quarter, the numbers remained solid.

How to Gain 50 or 200 Points Under Canada Express Entry

The third quarter saw previous changes to the CRS fully bedded in after new points for French language skills and having a sibling in Canada were introduced in June 2017.

The bedding in process saw the frequency of draws slow in June and July, before picking up again with three in August and two in September.

What Is  Express Entry? 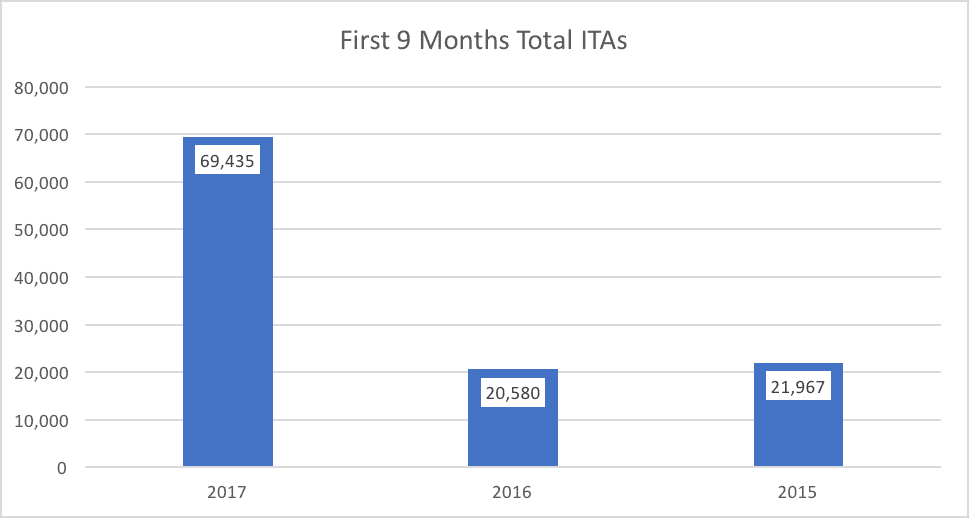 A key factor behind the increase is that economic immigrants are now almost exclusively coming to Canada through Express Entry. Previously, Immigration, Refugees and Citizenship Canada (IRCC) was clearing a backlog of applications made before Express Entry was launched.

With an upper target of more than 73,000 economic immigrants in 2017 under the IRCC’s levels plan, upping the numbers of ITAs was of crucial importance, especially given the drop off factor. The government can now draw on two-and-a-half years of data to show how many invites it needs to make to reach its target.

Looking quarterly, the decrease in ITAs between the third quarter and the first two quarters of 2017 can be clearly seen. 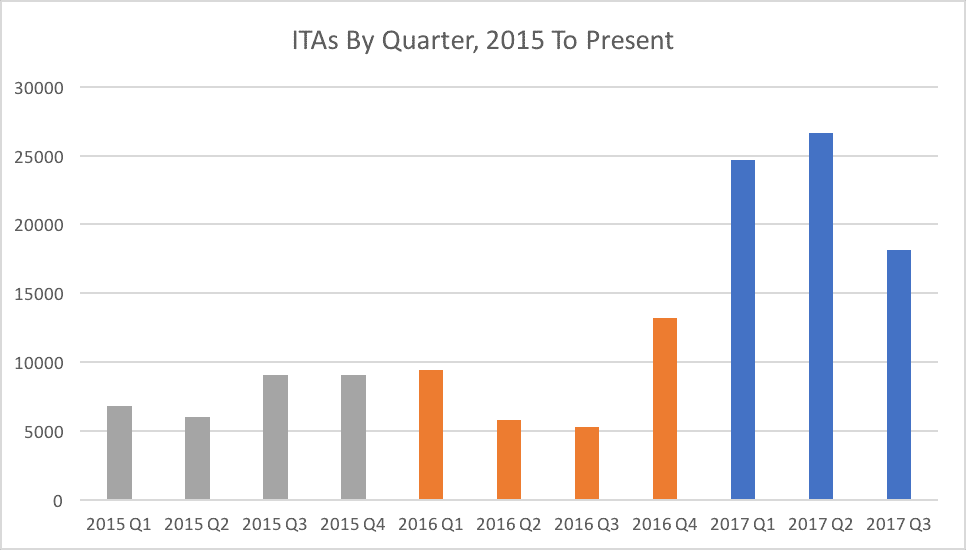 April to June was a record period for Express Entry, with more than 26,500 ITAs issued, crushing quarterly figures for the previous two years.

The main explanation for this relates to processing times. With a target of 80 per cent of applications processed inside six months, IRCC knows the majority of those it invited in the first six months of the year would land in Canada in 2017, contributing to the annual target mentioned above.

However, those invited between July and now are significantly less likely to land before December 31, making them increasingly likely to count towards 2018 figures, which are yet to be announced.

In the third quarter especially, the government had to tread carefully to ensure it gets the balance right between ITAs and immigration targets. With a new multi-year immigration levels plan expected in the fall, expect the numbers to rise again towards the end of 2017.

Looking at the ITAs by draw, it is clear the numbers remain significantly higher than other years, and that 2017 is on track to see a record number of individual draws, with 22 in the first nine months versus 20 at the same point in 2016. 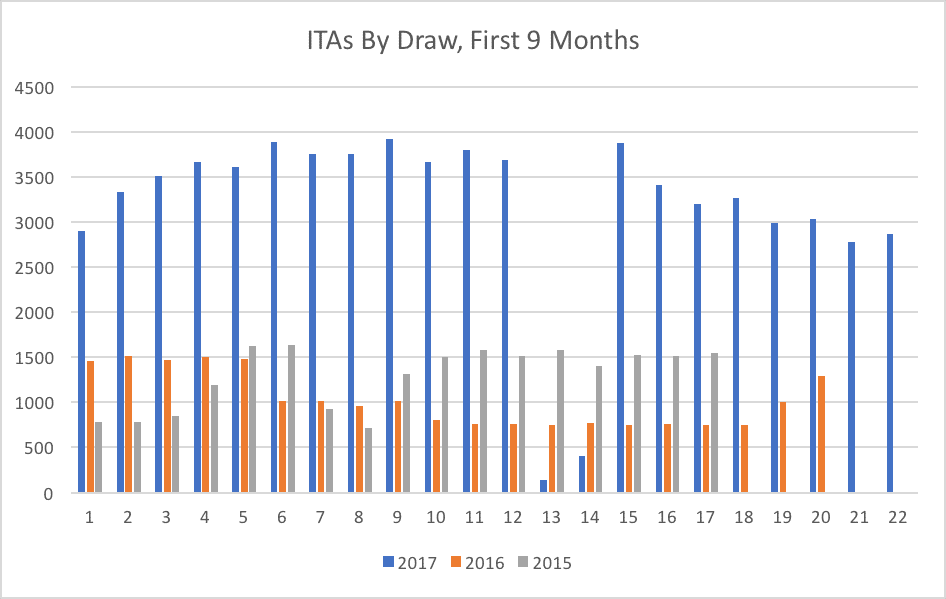 The program-specific draws (numbers 13 and 14) stick out on the graph because of their low numbers. These second-quarter draws were aimed specifically at Federal Skilled Trades candidates and provincial nomination candidates respectively. It is not known if IRCC is planning more such draws between now and the end of 2017.

Less frequent draws meant the minimum CRS score crept up in the third quarter, after reaching a record low of 413 in the penultimate draw of the second quarter. 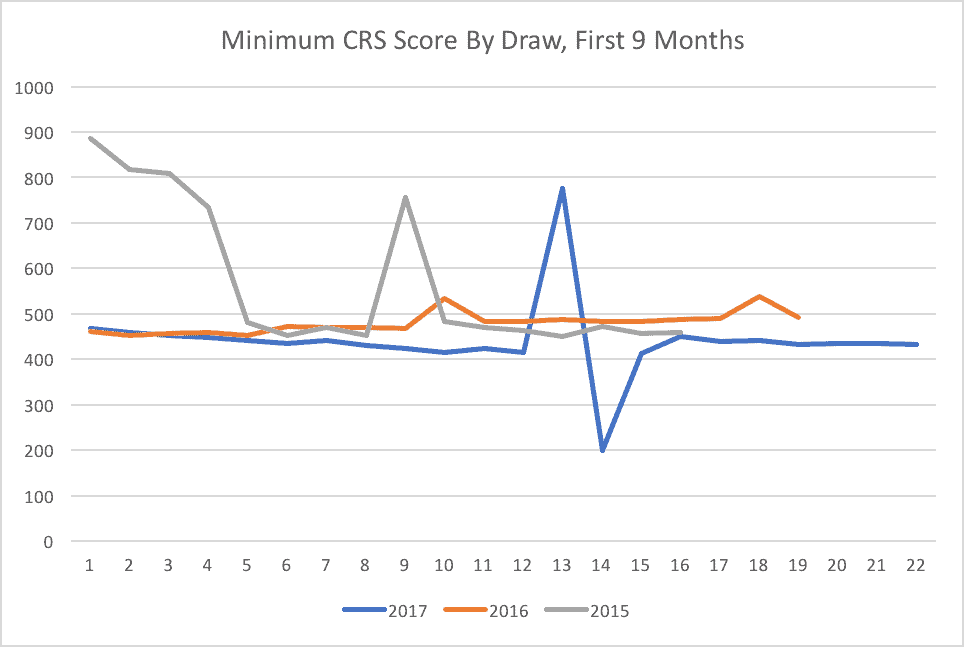 There were only six draws made in the third quarter of 2017, after seven in the first quarter and nine in the second quarter. Less frequent draws lead to more candidate profiles in the Express Entry Pool, meaning the bar is set higher for the target number of ITAs.

The third quarter was good for the consistency of score required, with minimum scores ranging between 433 and 441. This gives candidates a clear target of the kind of scores they need to achieve that coveted ITA.

After two sets of changes to the awarding of CRS points recently, there is no indication the IRCC is planning further tweaks to the scoring system.

Immigration officials have preferred to take a break from their two-week draw cycle immediately after changes have been made, to allow the necessary adjustments to take hold.

With no indication of any further changes, IRCC is free to push ahead with draws in the rest of 2017 with a system more geared towards candidates with a connection in Canada and the type of core skills that evidence shows gives them a greater chance of long-term economic success.

IRCC officials will by now have an idea by now of what the immigration levels for 2018 will be. Immigration Minister Ahmed Hussen has hinted the numbers will rise, although given the political tightrope he has to walk, it is wise to wait for the announcement expected in the late fall.

If the numbers are to rise again, the Express Entry draw sizes will also need to rise in the fourth quarter, when the majority of candidates invited will arrive in 2018 and therefore count against the 2018 levels target.

At the back end of 2016, when officials knew the 2017 target economic immigration levels were going to jump, the draw sizes began to increase significantly. The size of the Express Entry draws going into October will be a clear indication of what the government is planning for 2018.