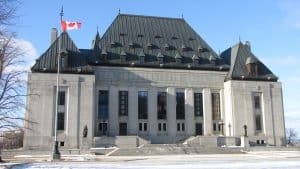 December 21, 2017 – Canada’s Supreme Court has ruled that a conditional sentence does not count as time spent in jail in cases involving serious criminality under section 36(1)(a) of the Immigration Act.  That section is the basis for finding a permanent resident inadmissible to Canada on grounds of “serious criminality and can lead to loss of status and removal from Canada.

The ruling was made in a recent case involving Thanh Tam Tran, a Vietnamese national who became a permanent resident of Canada in 1989.  He was convicted of running a marijuana factory in 2013, an offence for which he was given a one-year conditional sentence which did not involve a term of imprisonment.

However, Tran committed the offence in 2011, when the maximum sentence for the offence was seven years. He argued that he should therefore keep his permanent residence, given his punishment was only a conditional sentence and not a term of imprisonment.

This decision is significant in that it provides an important avenue for legal counsel and their clients to seek conditional sentences wherever possible.  Tran has harmonized s. 36 of the IRPA with criminal sentencing jurisprudence by clarifying that a conditional sentence does not infer «serious criminality» under the IRPA.

Finally, the decision highlights the reality that Canadian citizenship is not a right but a benefit which depends on mutual obligations between Canadian society and the individual.

Guidelines Pertaining to the Risk Assessment

When considering an immigration application from a candidate with a criminal conviction, here are some of the guidelines an IRCC case officer will consider:

The authorities require officers to review criminal cases. While reviewing these cases, officers will need to verify the time that has elapsed since the individual served the sentence. Doing this enables the officer to determine whether the client might be eligible for rehabilitation or can be deemed rehabilitated.

The onus remains on the client for demonstrating their level of risk and that further criminal activity is unlikely.

While carrying out a risk assessment, officers will need to assess:

For instance, an officer could consider granting a Temporary Resident Permit (TRP) valid for re-entry to a frequent business traveller who had been convicted of a minor criminal offence that made the individual inadmissible based on the provisions specified in A36 (2) and in case, the applicant meets the criteria outlined above.

In accordance with the provisions specified in A36 (1), the authorities will consider a permanent resident or a foreign national as being inadmissible on the grounds of serious criminality for:

Similarly, in accordance with the provisions specified in A36 (2), the authorities will consider a foreign national as being inadmissible on grounds of criminality for:

The authorities want officers to encourage applicants to apply for rehabilitation. In addition, they require that officers provide such applicants with the Application for Criminal Rehabilitation i.e. IMM 1444E.

It is worth mentioning that frequent travellers who repeatedly seek Temporary Resident Permits (TRPs) but have not applied for rehabilitation in spite of receiving counselling from officers about this, should not warrant any favourable consideration.