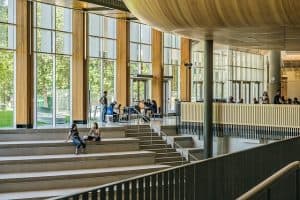 October 4, 2017 – Business schools need to seize the moment as international applications for Canadian MBAs surge in the wake of Donald Trump’s immigration crackdown and changes to the Canada immigration system.

A survey completed by the Graduate Management Admission Council (GMAC) says three quarters of Canada’s MBA schools have seen an increase in applications from international students. In the U.S., just 32 per cent of schools have recorded an increase.

The GMAC says this is the first time in five years the majority of schools have seen an international application increase, with 77 per cent of the 37 schools asked reporting a boost in interest from overseas.

At the University of Toronto’s Rotman School of Management, international applications have risen by 30 per cent in the last 12 months.

Simon Fraser University’s Beedie School of Business in Vancouver has seen a 20 per cent increase in international applications, with more than half of the 53-member 2017 class from overseas.

Out east in Atlantic Canada, the faculty of business on the Saint John campus of the University of New Brunswick has 78 full time students, with just four of them from Canada. The school’s recent Latin America recruitment drive has seen increased interest from Brazil, Ecuador and Colombia.

Meanwhile, the Rowe School of Business at Dalhousie University in Halifax has had significant success from a link-up with a private Indian university. It is planning a second agreement and has a recruitment agency working on its behalf in the Asian country.

The schools are now hoping the international intake can increase year-on-year, through word of mouth advertising. They know the quality of the degrees they are offering is crucial in boosting their reputations.

While Trump’s crackdown is a clear factor in the increased interest, others cite Canada’s competitive currency and tweaks to the federal immigration system designed to give more students a pathway to permanent residence.

They have Canadian credentials, knowledge of Canadian life, the required language skills, are young and often come with at least some Canadian work experience.

At the federal level, the current government has made it easier for international graduates to achieve Canadian immigration by introducing points under Canada Express Entry.

In November 2016, Comprehensive Ranking System points were added for three-year post secondary, master’s, professional degrees and doctorates (30 CRS points) and post-secondary diplomas lasting one or two years (15 CRS points). No points are awarded for a Canadian high school education or below. This gives many graduates the extra push they need to achieve a coveted Invitation to Apply.

The category imposes an advanced intermediate oral French requirement, but this stipulation is waived if half of the candidate’s studies are completed in Quebec and the qualification is recognized by the province. Candidates must either complete their studies in French or pass a French language test to transition to Canadian permanent residence. For more detail, see below.

Ontario For Master’s and PhD Graduates

Only the Ontario Immigrant Nominee Program runs a similar program without the need for a job offer, but it is aimed at Master’s and PhD graduates. The education requirement, therefore, is much more onerous, and the candidate must have English or French at Canadian Benchmark Level 7 or higher. The Ontario Master’s and PhD streams are open periodically throughout the year.

Concurrently, the federal government and relevant provinces also promote the Atlantic Immigration Pilot, which includes a category aimed at international graduates. But this program is employer-driven, making a job offer mandatory.

It was introduced earlier in 2017 to try and reverse aging populations and shrinking labour markets in the Atlantic provinces of Nova Scotia, Newfoundland & Labrador, New Brunswick and Prince Edward Island.

The Atlantic provinces of New Brunswick and Nova Scotia also promote international graduate entrepreneur categories. The main requirement here is for the candidate to have owned and operated their own business in the province for at least a year. For this they require a Post-Graduate Work Permit, also not required under the Quebec program.

The tables below offer a comparison between the various provincial programs for international graduates, offering Canadian permanent residence.

* When applying under Atlantic Immigration Pilot, international graduate candidates for New Brunswick and Nova Scotia require a job offer.  International graduate entrepreneur applicants do not, but they do need to have owned and operated a business in one of the provinces for at least a year.