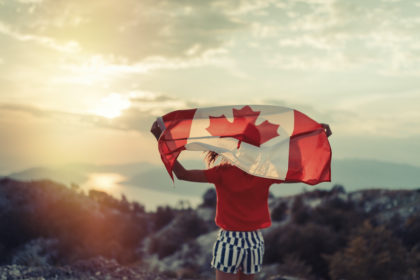 2019-09-30 – The third quarter of 2019 was the sixth most-prolific on record for the Canada Express Entry immigration system.

From July to September, Canada immigration authorities issued Invitations to Apply to 21,600 immigration candidates, bring the total to 63,400 for the year so far.

It means the total number of ITAs issued remains above 2018 at the nine-month stage.

To do this, IRCC will need to increase draw sizes beyond 3,600, the number of invites issued for the last six Express Entry draws.

For total ITAs after three quarters, 2017 remains the highest on record, despite less than 15,000 ITAs being issued in the third quarter that year.

IRCC, in the first half of 2017, record two of the top three quarters ever seen in Express Entry, as it looked to create an inventory of profiles moving forwards. Invites then dropped off significantly in the second half of the year.

Given 2018 and 2019 are the first two years of Express Entry running at full capacity with a full inventory of profiles, they warrant the most worthwhile comparison.

With just 900 ITAs separating the two years at the nine-month stage, it remains to be seen whether 2019 will eclipse 2018 and surpass the 90,000-invite barrier.

Separating out the third quarter in each year of Express Entry, results show 2018 has the most prolific July to September period on record, with 22,800 ITAs issued. 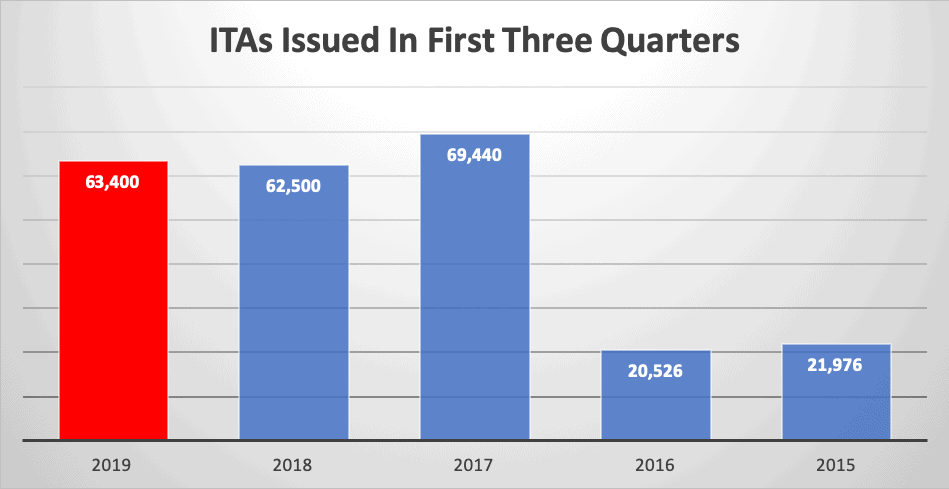 Results show the third quarter of 2018 saw the fourth-highest number of ITAs on record.

While 2019 has seen some consistently high quarters, making up three of the top eight, to date the numbers have been lower than 2018.

Whether IRCC is planning to push the numbers up in the final quarter of 2019 remains to be seen.

It would depend on whether IRCC has seen a change in the relationship between ITAs issued and arrivals of new permanent residents.

ITAs issued in the second half of each calendar year are likely to represent arrivals in the first half of the following 12-month period, given the target processing time of six months from receipt of full application.

Despite the bigger numbers seen in other years, 2019 still holds the record for the largest average draw size in the first nine months.

IRCC has been much more even withdraw sizes in 2019 than it was in other years, a result of greater knowledge of operating the system and the tie-breaking rule, which allows for greater precision. 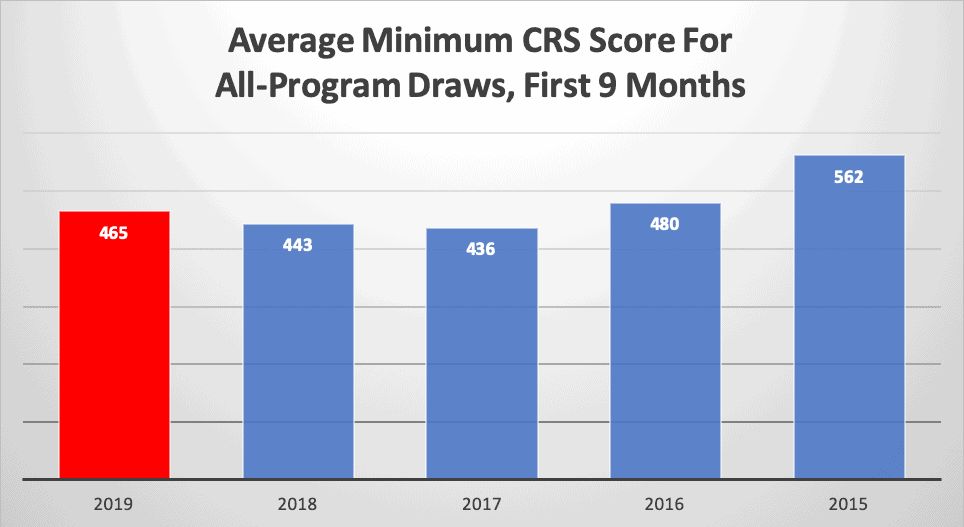 IRCC continues at an average of conducting a draw every two weeks, although twice in 2019 it left three weeks between draws, making up for it by twice leaving only a one-week gap.

According to IRCC, the aim is for draws every two weeks, but this can be thrown off by system maintenance. 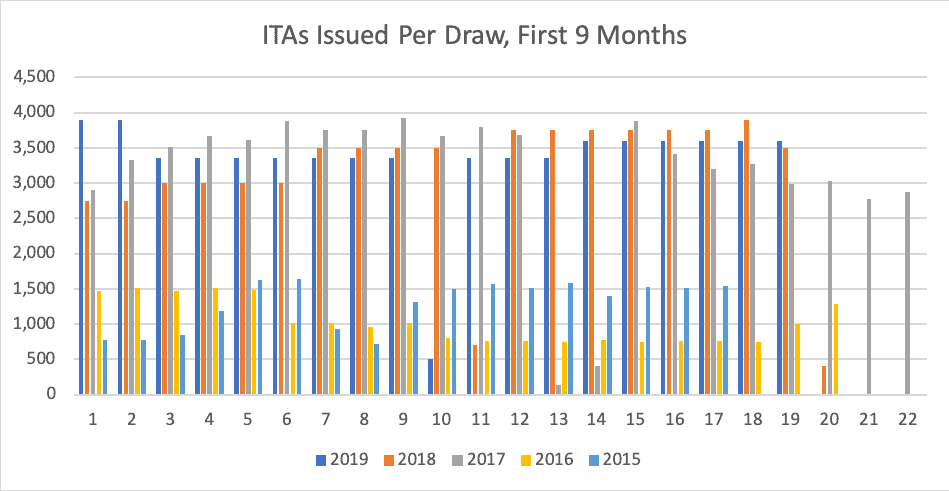 One clear pattern to emerge in the second and third quarters of 2019 has been higher Comprehensive Ranking System (CRS) scores.

Since the 10th all-program draw on May 15, CRS scores have remained around or above the 460 mark, after dipping as low as 438 in January.

The minimum CRS score is affected by the gap left between draws, as it allows for greater accumulation of profiles.

However, the overall standard of profiles in the pool has increased, as candidates become aware of how to maximize their scores and how to work on improving them. 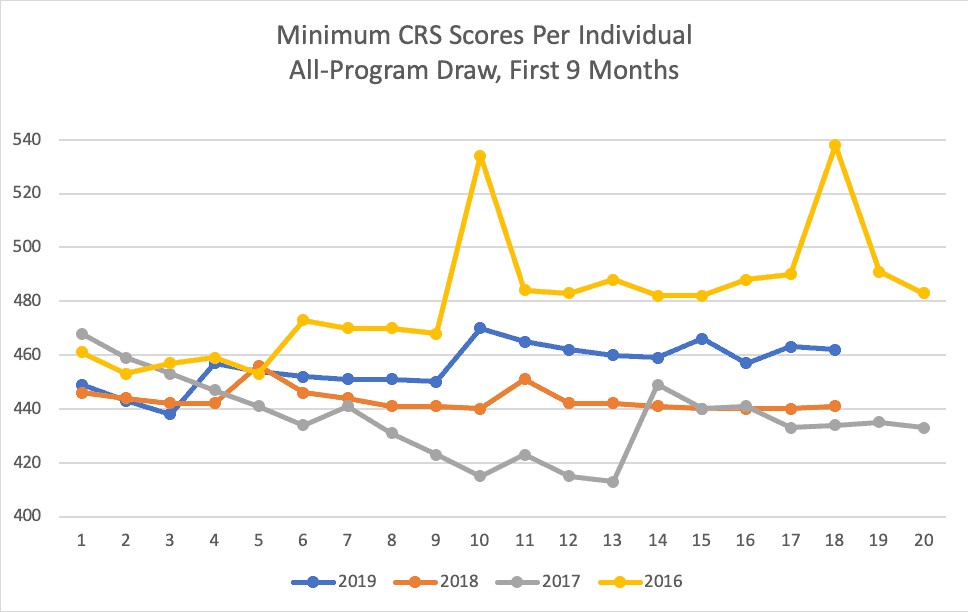 The average minimum CRS score of 465 is the highest for a nine-month period since 2016.

If draw sizes increase in the fourth quarter of the year, this could have the affect of causing CRS scores to drop, but the average is unlikely to fall below 460 for 12-month period.

This gives candidates an idea of where their profiles need to be to receive an ITA from federal draws.

IRCC will need to significantly increase draw sizes in the final quarter if it is to set a new ITA record in 2019.

The quarterly ITA figure will need to be over 25,000 for only the third time in history for the record to be broken.

That will mean draw sizes above the current trend of 3,600 ITAs. If draw sizes do get bigger, that could mean the minimum CRS score drops in the final three months of the year.

Given 2018 is the best point of reference for what might happen in 2019, it seems likely that the fourth quarter may see an increase in ITAs.

The fourth quarter is an important month for Express Entry as those invited during the period are highly likely to get their permanent resident status in Canada during 2020. It allows IRCC to make progress towards it skilled immigration target for next year.

The red herring that could affect Express Entry in the fourth quarter is Canada’s federal election, taking place in October.

A new government may decide it wants to take stock before setting immigration levels, in which case a stall in Express Entry rounds of invitations could happen.

All eyes are on the October 21 vote.