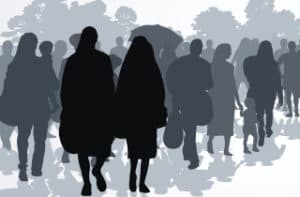 The Conference Board of Canada, in its latest report on immigration, advocates a 50 per cent increase in annual immigration levels to 450,000 a year. It comes as the federal government is on the verge of deciding how many immigrants will be accepted over the next several years. Ottawa is well advised to exercise caution with the theoretical assumptions raised in this report.

The Oct. 2 report, titled “450,000 Immigrants Annually? Integration is Imperative to Growth,” establishes three scenarios based on three different immigration levels as a percentage of Canada’s population: 0.82 per cent (the current level was set at 300,000 for 2017), one per cent and 1.11 per cent.

It then attempts to estimate how these levels will affect different demographic factors between now and 2040: population, the number of elderly, the ratio of workers to retirees, GDP, GDP per capita and the incremental cost increase of health care an aging population will bring. It boldly asserts that choosing the highest figure of 450,000 would greatly help Canada meet its economic and financial obligations in the years ahead.

Canada’s population is aging, its birth rate is falling and its labour market is contracting. Immigration now accounts for a record 75 per cent of Canada’s population growth in 2017. The Canadian population grew by 1.2 per cent in the last 12 months. This growth comes following Ottawa’s move to increase immigration levels, starting in 2016, with an influx of Syrian refugees and continuing this year. We are more dependent than ever on newcomers for economic prosperity.

Figures show that the percentage of immigrants in the working-age population has been steadily increasing for the last decade as the Canada-born proportion drops, illustrating the need to make up the shortfall by bringing in foreign workers.

In 2006, less than 20 per cent of the workforce — those aged 15 and over — were from the landed immigrant population, while more than 78 per cent were born in Canada. But fast forward 10 years and Statistics Canada data show an immigrant percentage just less than 24 per cent, while the Canada-born proportion has dropped almost as low as 74 per cent.

If this trend continues — and there is no indication it will not — the two percentages will converge. Analysts assert that the data show Canada has reached the point where it cannot grow without immigrants, with Canadian-born workers exiting the labour force at such a rate.

Increased immigration levels are an important tool to help offset this growing demographic challenge. Figures show that immigrants are on average 12 years younger than Canadians, and newcomers from our leading source countries have a higher birth rate. Increasing our immigration levels lowers the average age of the population and ensures that a larger number of Canadians remains healthier and contributes to the economy.

The problem with the board’s calculations is the failure to address our biggest dilemma: how Canada can successfully integrate so many new immigrants so quickly.

“There could be negative economic and fiscal consequences, especially if immigration levels increase and Canada does not effectively address the labour market challenges that immigrants commonly face,” the report acknowledges.

“With Canada becoming more reliant on immigrants to meet its labour market needs, the success of its immigration system will greatly depend on its ability to improve the labour market outcomes of immigrants, expand its absorptive capacity and maintain public support for immigration.»

It is well documented that on a shorter-term basis, newcomers are an initial drain on government coffers, making the challenge of integration central to economically viable immigration policy. To flood Canada with extra immigrants, as the conference board report suggests, runs the risk of overwhelming the current integration effort.

The report must be reviewed in the context of a number of studies that endorse the economic benefits of immigration primarily over the long term.

An International Monetary Fund report, released in November 2016, argues that immigrants have an undeniable long-term benefit for advanced economies. Both high- and low-skilled immigrants make a contribution over time that results in boosting the GDP of the country they move to, the study said.

A Statistics Canada study concluded in 2016 that immigrants are far more likely to own businesses than their Canadian counterparts, a key growth component. Released in March 2016, and titled “Immigration, Business Ownership and Employment in Canada,” the study said “rates of private business ownership and unincorporated self-employment are higher among immigrants than among the Canadian-born population.” The conclusions were based on figures from the Canadian Employer-Employee Dynamics Database.

Statistics also show that immigrant children — often referred to as the real human capital benefits that accompany immigration — consistently beat their peers with Canadian-born parents in terms of educational attainment.

A paper by Statistics Canada titled “Educational and Labour Market Outcomes of Childhood Immigrants by Admission Class” reveals that the children of immigrants graduate from high school at a rate of 91.6 per cent, compared with 88.8 per cent of children who are third generation or more. When it comes to university, the gap increases, with 35.9 per cent of immigrant children graduating, compared with 24.4 per cent from the established Canadian group.

A further study suggests that the more immigrants of a given nationality or culture a country welcomes, the more likely the nation of origin is to invest further down the line. According to the National Bureau of Economic Research in the U.S., investment comes in the long term, since often the “push” factors of migration mean the nation of origin is not able to invest in the short term.

A good example of this is Syria, which is unlikely to be a source of investment any time soon, but with refugees spreading all over the world — including more than 40,000 in Canada — investment could flow in more stable times when citizens are looking for places to put their assets.

The evidence is clear: Incremental increases in immigration numbers over the long term are likely to be a significant economic benefit to Canada. But the increase needs to take place in a managed way to allow the capacity to integrate newcomers to grow alongside the numbers.

Immigration levels in the 450,000 range are unrealistic in relation to our current levels, and are designed purely to garner headlines. Ottawa is advised to set its course more prudently.