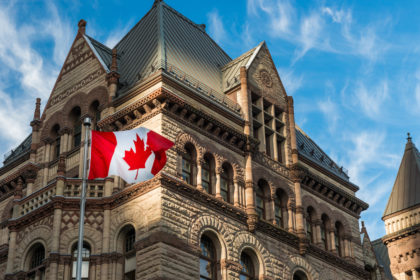 Canada Express Entry ended the first half of 2020 having issued the second-most Invitations to Apply on record, despite the country being in the grip of the coronavirus crisis.

The second quarter featured 27,300 ITAs, equally the second-most prolific quarter of all time and also only beaten by the same quarter of 2017.

It means that, despite the Canada-U.S. border closure and the restricted entry of foreign travelers to try and slow the spread of the pandemic, it has not stopped Immigration, Refugees and Citizenship Canada (IRCC) from issuing ITAs in huge numbers. 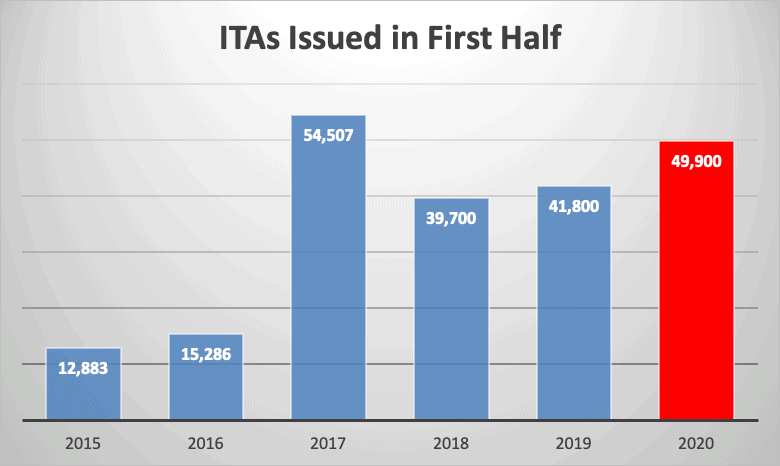 Although an ITA is a crucial step towards Canada immigration, it comes early in the process, with candidates still to submit their completed applications.

Permanent resident arrivals have slowed significantly since the start of the crisis, with just 4,140 new immigrants arrive in April.

However, the high ITA numbers are a clear indication from the federal government that immigration will take center stage during Canada’s coronavirus recovery.

IRCC was forced to change track on Express Entry due to the COVID-19 pandemic, switching to program-specific draws aimed at Canadian Experience Class and Provincial Nominee Program candidates.

Candidates in the two categories are more likely to already be in Canada than those coming through other Express Entry-linked programs, meaning they will not be affected by travel restrictions.

CRS Score Not High Enough? What Are My Canada Immigration Options? 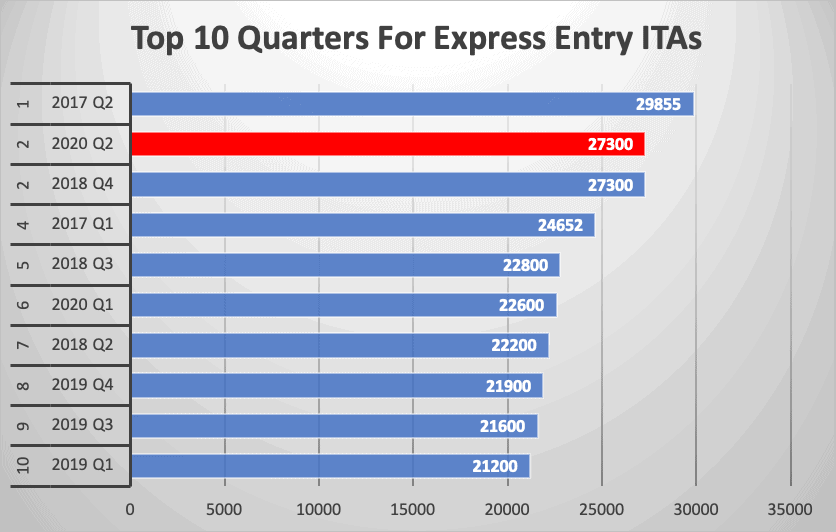 The move to program-specific draws makes comparisons difficult between the most recent period and others on any figures other than the total ITAs.

Comparing the Comprehensive Ranking System (CRS) scores for CEC and PNP draws against all-program conducted in previous quarters is of limited value.

What is clear is that the 14 individual draws that took place in the second quarter of 2020 are the most of any three-month period. IRCC has chosen to conduct draws in pairs since coronavirus struck in mid-March, driving up the number of individual draws.

It means that entering the second of the year, Canada has already conducted 21 Express Entry draws. The most ever conducted in a full calendar year was the 30 carried out in 2017. The first half of that year saw 17 individual draws conducted. 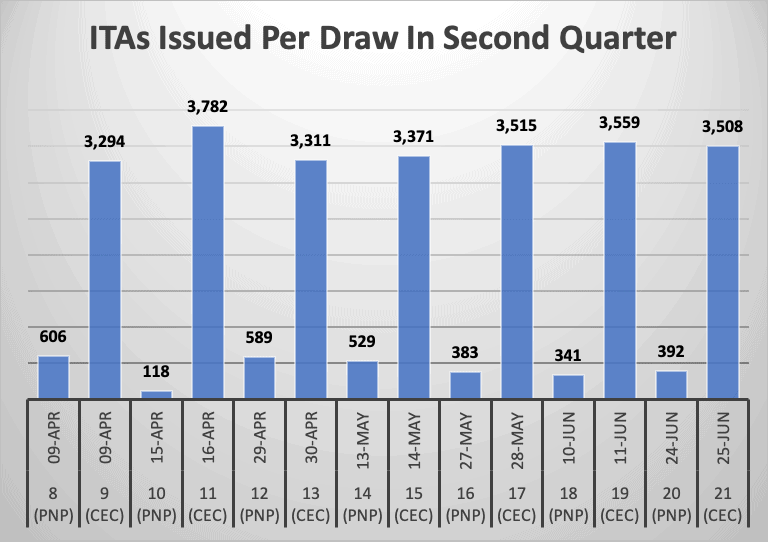 The vast majority of the ITAs issued during the second quarter of 2020 went to CEC candidates.

Each of the seven CEC draws conducted featured well over 3,000 ITAs, with four of them seeing more than 3,500 candidates invited.

The high number of ITAs in turn ensured that the minimum CRS fell with each draw. 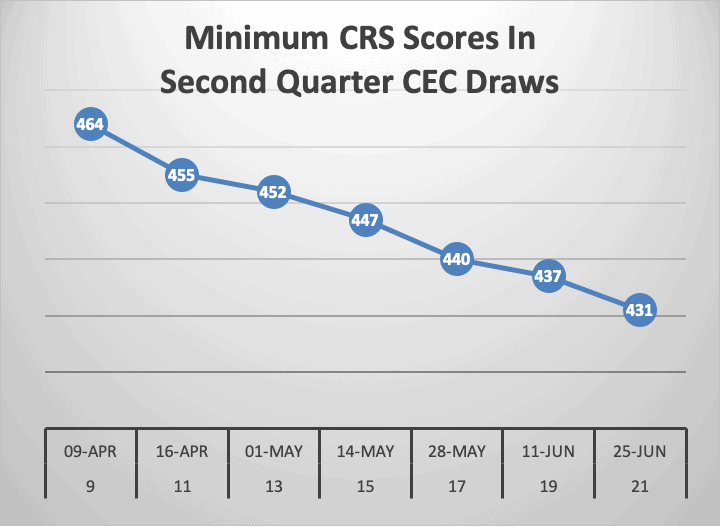 Given the established pattern, it seems that for as long as IRCC continues CEC draws of this size every two weeks, the CRS score will continue to fall.

For PNP candidates, CRS scores were much higher, given that they receive an additional 600 points towards their profiles for receiving a provincial nomination.

There was also no significant pattern to PNP CRS scores, with a peak of 808 points required in the April 15 draw, down to 692 on April 29. 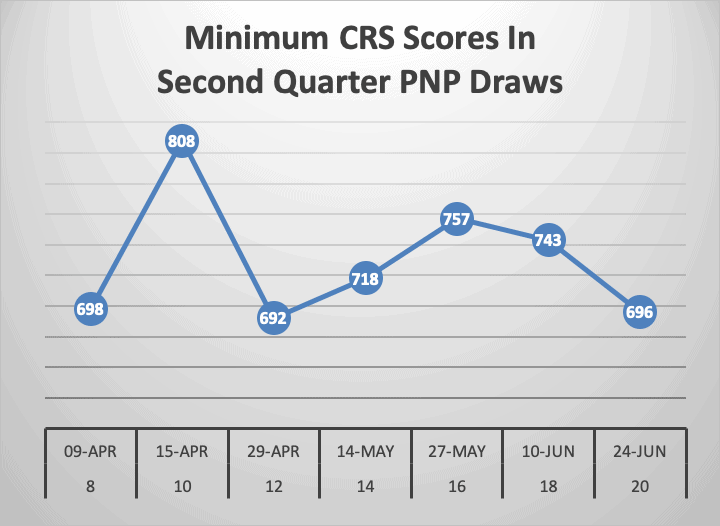 PNP candidates also received far fewer ITAs than CEC candidates, a total of 2,870, or 11 percent, across the seven draws.

The PNP Express Entry category has never been a mass immigration stream, just a way for Canada’s provinces to select candidates specific to their needs.

It is difficult to make worthwhile predictions about what shape Express Entry will take in the rest of 2020, given the current coronavirus restrictions.

The resumption of permanent resident arrivals and all-program draws depends on how quickly the restrictions are lifted.

The Canada-U.S. border is closed until at least July 21, while restrictions on foreign travelers entering Canada are likely to be extended to July 31, and possibly beyond.

Once the restrictions are lifted, it is unlikely that immigration will simply resume at full throttle.

Officials will have to consider the economic situation, including unemployment when deciding how quickly new immigrants can start to arrive.

It has already been stated that Canada’s pre-coronavirus target of 341,000 newcomers in 2020 is unlikely to be reached.