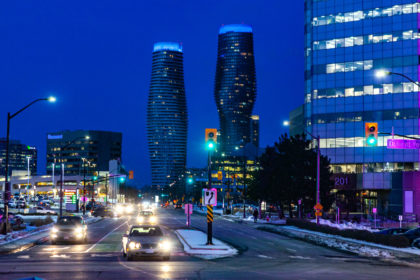 Canada admitted a new record of nearly 110,000 new immigrants through Express Entry in 2019 in the busiest year on record for the skilled immigration selection system.

The year also saw more than 330,000 profiles submitted to the Express Entry pool, a rise of 20 percent in 2018 and an indication of the increasing interest in immigration to Canada.

Some of the 2019 Express Entry highlights include: 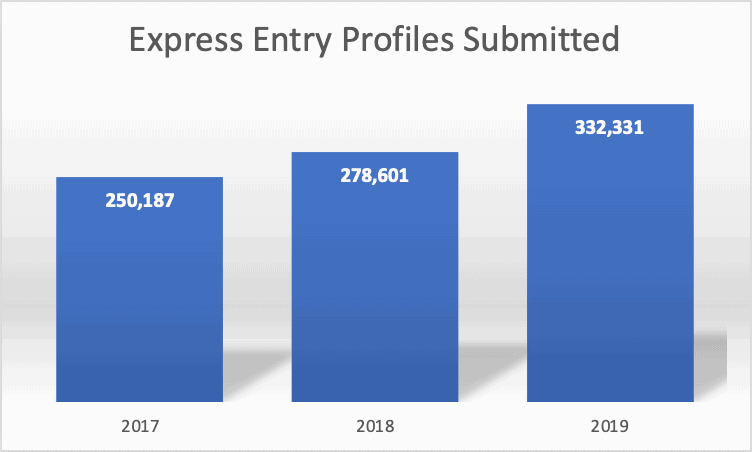 Increases in both the number and percentage of eligible profiles show how the calibre of candidates in the Express Entry pool is improving, which in turn indicates how interest in Canada immigration is growing.

In 2019, 239,115 of the total profiles submitted, or 72 percent, were eligible for one of the programs covered by Express Entry, namely Canadian Experience Class, Federal Skilled Worker, Federal Skilled Trades and parts of the Provincial Nominee Program.

This shows how Canada’s economic immigration system achieves the aim of selecting the best candidates. Simply qualifying for the program does not guarantee passage to permanent residence. Express Entry means candidates must record a sufficiently high score to secure a coveted Invitation to Apply (ITA). 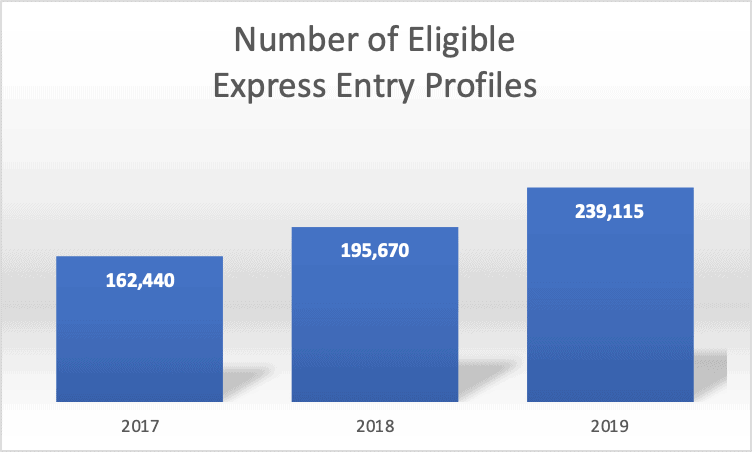 Although the Express Entry pool is dynamic, meaning it is affected by every draw, the composition dramatically between January 2019 and January 2020.

As has already been published, 2019 saw 85,300 ITAs issued, short of the record set in 2018. at 89,800. The number of ITAs is expected to increase in the coming years, as Canada increases its immigration levels. The figures for 2020 are expected to be impacted by the coronavirus pandemic, although it should be noted Canada has continued to issue ITAs despite travel restrictions.

When the 2019 invites are broken down by the program, the dominance of the FSW and CES becomes clear, accounting for nearly 70,000 of the total ITAs received.

The importance of program-specific draws in revealed by the breakdown, with zero FST candidates receiving invitations from all-program draws. 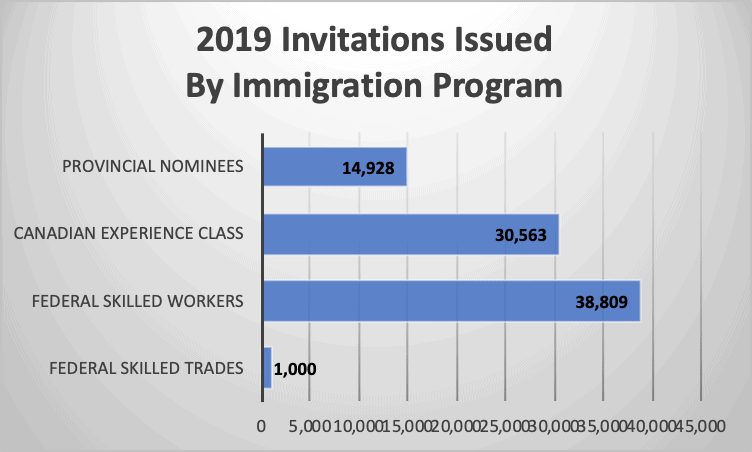 This is backed up by another important figure, the more than 40,000 ITAs that went to candidates already in Canada during 2019.

The message is clear: that if your credentials do not allow you to come to Canada directly as a permanent resident, there is still a pathway available via the work permit route if a qualifying job offer can be secured. 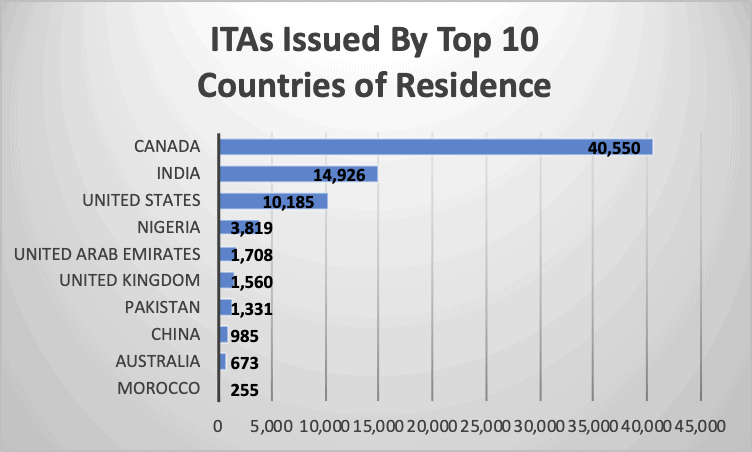 A substantial 40,275 ITAs went to Indian citizens in 2019, more than the other nine countries in the top 10 combined. Nigeria also moves above China as the second most common country of citizenship to receive an ITA.

India is established as the most important source country for new economic immigrants to Canada. 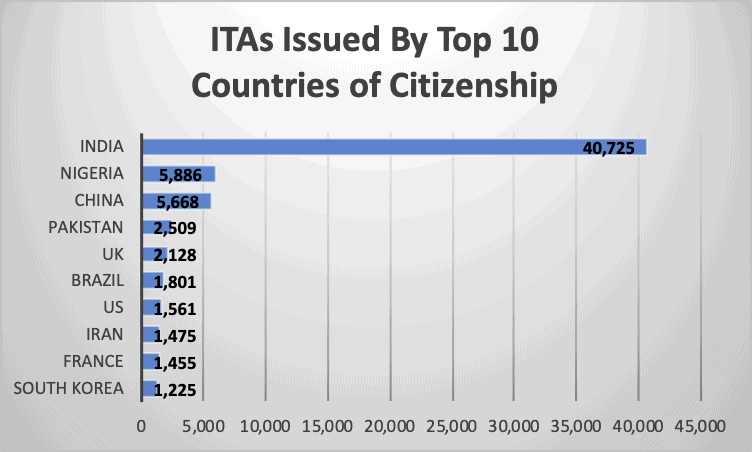 Given that Indians are renowned for their excellence in technology occupations, it should come as no surprise that the top 10 Express Entry occupations for 2019 are dominated by IT National Occupational Classification (NOC) codes.

The top three software engineers, systems analysts, and computer programmers are some of the most sought-after skilled workers in the Canadian economy.

IRCC registered a total of 67,260 principal applicants for permanent residence through Express Entry in 2019.

Of those, 62 percent or 41,749 indicated their intended destination as Ontario. This outlines the dominance of Canada’s largest province, and in particular, the city of Toronto has on economic immigration.

The second highest-receiving province was British Columbia, with 13,482 principal applicants.

It should be noted that Quebec is not included under Express Entry as the French-speaking province operates its own economic immigration system, named Arrima. 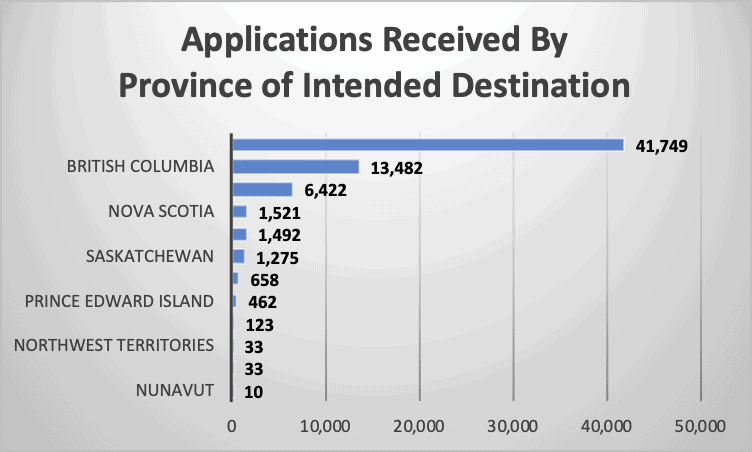 The marked increases in numbers of ITAs and applications under Express Entry in 2019 meant IRCC was unable to maintain its target processing time of six months for 80 percent of applications.

The average processing time across all programs in 2019 was eight months, up from five months in 2018.

Processing times through FSW and CEC – which saw the vast majority of applications – were nine months and seven months respectively, while the FST registered an average processing time of 12 months.

Express Entry Processing Time By Year and Program (In Months)

The IRCC’s Express Entry Year-End Report shows how Canada’s advanced system for welcoming skilled workers continued to accept a range of candidates in 2019.

While numbers of profiles, applications and admissions all increased, only the number of ITAs issued dipped slightly when compared to the 2018 figure.

The system did, however, allow Canada to more than meet its economic immigration target for the year.

Given the increase in processing times observed in the report, IRCC says it took steps in late 2019 to address the issue and bring times back within the six-month standard.

However, given the coronavirus outbreak, 2020 seems unlikely to continue on the upwards curve witness in 2019. Despite draws continuing for both the CEC and PNP categories, it seems likely the number of candidates admitted through Express Entry this year will fall.

IRCC says it is “monitoring Express Entry and exploring ways the system could be used to ensure that Canada continues to derive maximum benefit from economic immigration in a rapidly evolving environment”.

This suggests all that officials can do is respond to the rapidly evolving situation as it develops.