The 22,200 invitations issued was the third highest quarterly total on record.

The range of minimum Comprehensive Ranking System scores is narrower than ever.  Most draws were within two or three points needed to receive an Invitation to Apply.

Increased draw sizes show Immigration, Refugees and Citizenship Canada is driving up the numbers to ensure ambitious immigration levels targets will be met for 2018.

The second quarter saw a marked increase in ITA numbers on the first quarter. Candidates invited in the second quarter are some of the last to have a realistic chance of landing in Canada this year. 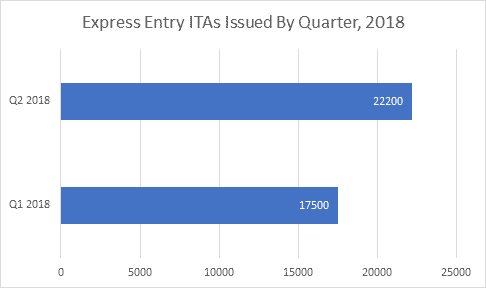 What Are the Important Express Entry 2018 Statistics?

What Does the Quarterly Breakdown Tell Us?

The second quarter of 2017 saw the highest number of ITAs in Express Entry history.

IRCC explained this in its review of the year, saying it needed to establish a sufficient pool of candidates who had received ITAs.


This may mean it may be a long time before the larger 2017 invitation numbers are repeated.

A bank of candidates with ITAs means a steady flow of completed applications, successful applications and arrivals in Canada.

There are increasing numbers of high skilled candidates in the immigration levels planned for (around 75,000 for 2018).   Sufficient data is important to develop understanding on how the numbers of ITAs relate to actual arrivals in Canada. 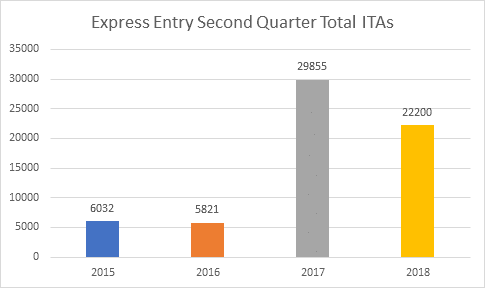 The main difference between the current period compared to one year ago is that IRCC has a three-year levels plan to meet.

This means government can issue ITAs with more confidence in later quarters, when the candidates they are inviting will likely not arrive until the next calendar year.

What Does the First Half Breakdown Tell Us? 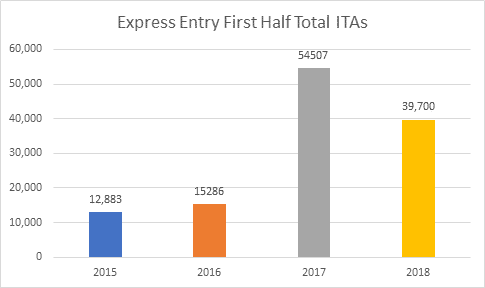 The numbers for the first six months of each year follow a similar pattern to the quarterly figures, with 2017 setting the pace.

Given the higher levels plan for 2019, the gap in ITAs could close, although as said before, it is unlikely to reach the 2017 annual totals. 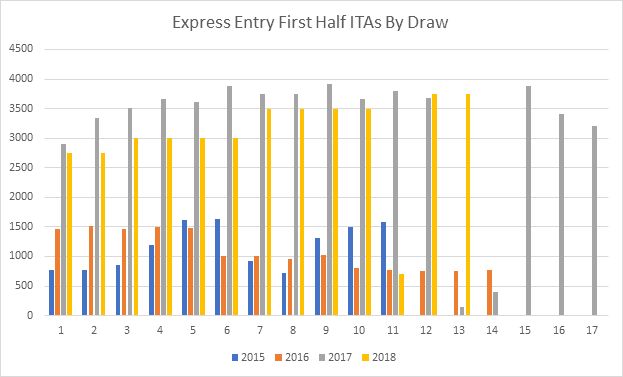 The above chart refers to the individual draws and highlights how the figures for 2018 are consistently lower than the comparable numbers for 2017.

However, there were four extra draws in the first half of 2017, including the second largest draw of all time.   The four additional 2017 draws account for nearly 10,000 ITAs.

The above chart also shows how draw numbers have consistently grown in 2018.

An important conclusion for 2018 is that numbers both in terms of ITAs and minimum CRS scores are more consistent than in 2017.

This results from two factors:

IRCC now has greater accrued expertise in how to manage the Express Entry system, and this promotes more consistency in all figures. 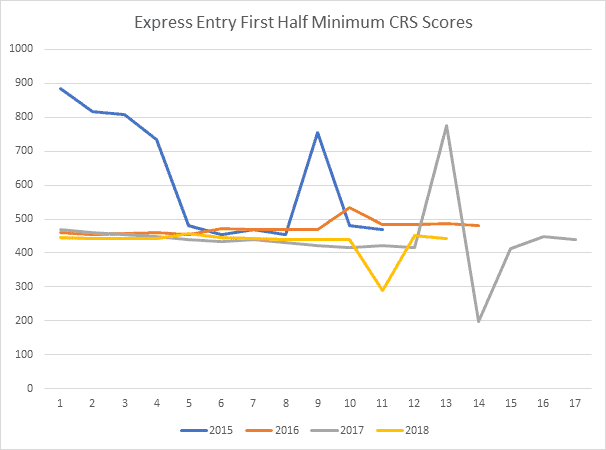 Excluding the 11th draw (a program-specific draw), the yellow line in the above chart representing 2018 CRS scores is nearly flat, ranging in the lower 440s for CRS scores.

For candidates, the important conclusion is that a score near 440 was needed to receive an ITA.

Candidates with a score below that, should be looking for ways to increase it.

The best way to increase your CRS score is with a job offer. Our in-house recruitment team can help. Visit skilledworker.com for more information.

What Will Express Entry Look Like in The Rest Of 2018?

Express Entry has enjoyed a consistent six months at the start of 2018.

There have been no program changes to account for.

A recent procedural change has been a return to a 60-day window to submit an application after receiving an ITA in draws after June 26, 2018.

Therefore, the current scores may offer a realistic look at how the system is likely to operate for the balance of the year.

Increased federal high skilled immigration levels are on the horizon.

Draw sizes are likely to be maintained or increase over the next six months.

Will IRCC make the jump to 4,000 ITAs in an individual draw? It is possible, but the jump will only be made if the statistics show it is needed.

Candidates in the pool have important data of past draws and CRS scores needed to receive a coveted ITA.

The goal for candidates, therefore, should be to improve their credentials especially those with with a score below 400.