Border Jumpers Get Message As Asylum Seekers Reduce To Trickle

September 6, 2017 -Would-be Canada asylum seekers in the U.S. appear to be getting the message that they are no guarantees of a new life north of the border. 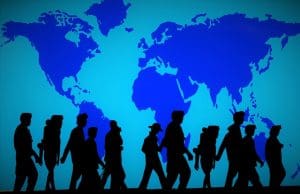 The stream of people crossing the Quebec border has reduced to a trickle recently, with under 50 per day now arriving after numbers peaked in the several hundreds during July and August.

An information campaign warned potential newcomers they would receive no special treatment in Canada, and a long time spent in the U.S. would count against any Canadian immigration application.

This, combined with the start of the school year, is believed to be behind the dramatic reduction in numbers. Parents, no matter what their background, are always reluctant to move their children during the school year.    It will also support the argument that the majority of current asylum seekers, are in fact economic queue jumpers, seeking a faster entry into Canada.

The vast majority are Haitians, following a Donald Trump threat to remove the special status they were afforded in the wake of a devastating 2010 earthquake. The country was also hit by Hurricane Matthew in 2016, damaging crops and leaving many starving, and is currently battling a cholera epidemic.

Tens of thousands of Haitians have reacted by leaving the country in search of a better life, with some 40,000 said to have made their way to the U.S.

Several temporary shelters have been set up for newcomers, including one in Cornwall, Ontario, near the Quebec border. Others include Montreal’s Olympic Stadium, an old hospital and a school. A makeshift border camp has also been set up by the Canadian army to act as an initial processing centre.

Not Afraid to Deport

Canada has shown it will deport asylum seekers who do not meet the requirements of the immigration system.

Deportation of Mexicans has risen sharply since Canada’s move to withdraw a visa restriction on travellers from America’s southern neighbour.