May 5, 2017 – Canada unemployment fell to its lowest point in almost nine years in April following a modest set of Canada jobs figures. 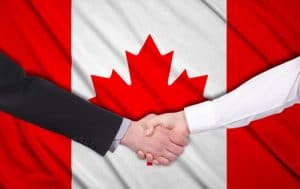 The 6.5 per cent unemployment rate is the lowest recorded since October 2008, as the Canada economy continues to move forwards at a steady rate.

However, the drop of 0.2 percentage points from the end of March is largely accounted by a decrease of 48,000 people in real numbers.

Overall, and compared to the same point in 2016, there are 276,000 more people in work, while the Canada unemployment rate has fallen 0.6 percentage points from 7.1 per cent.

The latest Statistic Canada Labour Force Survey also showed a slightly lower employment rate at 61.4 per cent and a labour force participation rate of 65.6 per cent.

In the provinces, British Columbia was knocked off top spot in terms of unemployment rate despite seeing employment increase by 11,000 in April.

Manitoba is now the province with the lowest unemployment rate at 5.4 per cent, closely followed by B.C. at 5.5 per cent.

Ontario follows with an unemployment rate of 5.8 per cent, completing a trio of provinces with a rate under the 6 per cent threshold.

The B.C. results are the strongest over a longer period of time, with 80,000 more people in work since 12 months ago, an increase of 3.4 per cent.

Prince Edward Island is also seeing strong growth, with 800 more people working on the month and 2,500 on the year, an increase of 3.5 per cent.

Ontario recorded a significant drop in unemployment of 0.6 percentage points between March and April, due to fewer people looking for work. There were 87,000 more Ontarians in work in April 2017 compared with a year earlier, a rise of 1.2 per cent.

Quebec had a solid month with little movement, consolidating a strong year that has seen employment rise by 88,000, or 2.1 per cent. Unemployment in the French-speaking province is down 0.8 percentage points on the year, to 6.6 per cent.

Candidates from overseas who are looking for assistance in finding a job in Canada, to complement a Canada visa project, are invited to contact Global Recruiters of Montreal, immigration.ca’s in-house recruitment agency.