Canada is the fourth-most welcoming nation in the world for refugees, but most would not open their own home to people fleeing war or persecution.

That is the result of a new survey asking questions about refugees at a time when millions have escaped conflict-ravaged Syria and are looking for new homes. 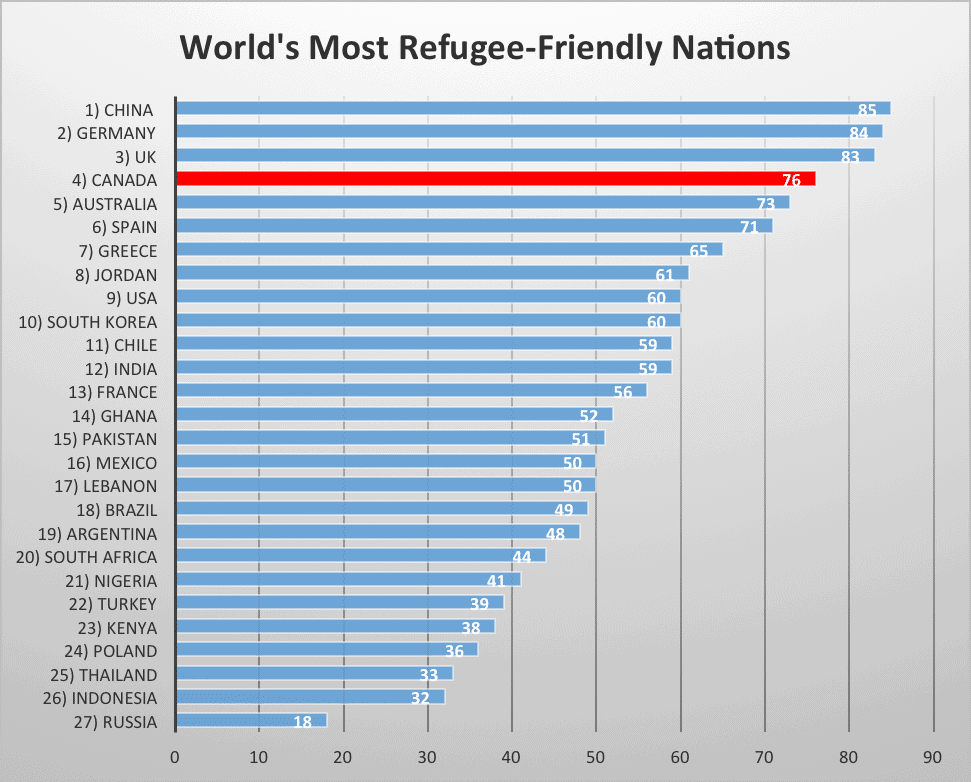 China tops the Amnesty International Refugees Welcome Index, scoring 85 out of 100, with citizens of the world’s most populous nation say their government should be doing more to help people forced to leave their home countries.

Germany and the UK are second and third in the list, with Canada and then Australia making up the top five. Russia finished bottom of the 27 countries surveyed, scoring just 18 out of 100 overall.

“These figures speak for themselves” said Salil Shetty, Secretary General of Amnesty International.

“People are ready to make refugees welcome, but governments’ inhumane responses to the refugee crisis are badly out of touch with the views of their own citizens.

“The Refugees Welcome Index exposes the shameful way governments have played short term politics with the lives of people fleeing war and repression. Governments must heed these results, which clearly show the vast majority of people ready and willing to make refugees welcome in their country.

“Governments cannot allow their response to the refugee crisis to be held hostage by headlines. Too often they use xenophobic anti-refugee rhetoric to chase approval ratings. This survey suggests they are not listening to the silent majority of welcoming citizens who take the refugee crisis personally.”

Canada has accepted 27,190 Syrian refugees as Justin Trudeau’s Liberal government looks to position itself as doing its bit for what has become a global effort.

When the survey asked Canadians if they would personally accept refugees into their country, 88 per cent responded positively.

However, when the question ‘Would you accept refugees into your home?’ was asked, the figures dropped dramatically. Just 15 per cent of Canadians said they would open their doors to a refugee, good enough for sixth position on the list. China significantly won this category on 46 per cent.

Relative to other countries, more Canadians feel their government is already doing enough to help refugees, coming out 16th on the list in this category. However, 66 per cent of those asked still said they would like Canada to do more. This contradicts an earlier survey by the Angus Reid Institute that suggested Canadians felt Trudeau’s target of accepting 25,000 Syrians was too high.

Meanwhile, a prominent figure in a Canadian committee offering support to refugees said recently that the federal government’s policies were working against citizens who were willing to offer sponsorship.

Patricia Paul-Carson, co-chair of the Syrian Refugee Sub Group at the First Unitarian Congregation of Ottawa, highlighted issues with the way refugees are allocated, the forms they need to fill out, a lack of clarity on when they will arrive and the vast difference in treatment between government and privately-sponsored subjects. 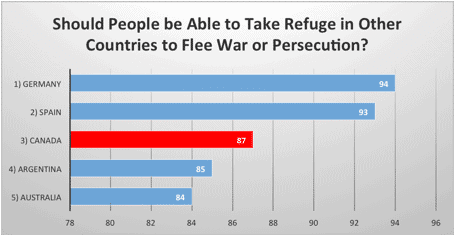