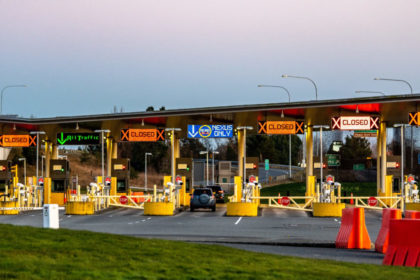 The United States Department of Homeland Security is keeping America’s border closed until at least Sept. 21 to even fully-vaccinated Canadians hoping to head south for non-essential travel.

“To minimize the spread of #COVID19, including the Delta variant, the United States is extending restrictions on non-essential travel at our land and ferry crossings with Canada and Mexico through Sept. 21, while continuing to ensure the flow of essential trade and travel,” Homeland Security tweeted out Friday morning.

“In coordination with public health and medical experts, DHS continues working closely with its partners across the United States and internationally to determine how to safely and sustainably resume normal travel.”

But the extension of the travel ban, which was to expire Saturday, is not going over well with many Canadians who were hoping to go to the U.S.

Twitter is exploding with angry comments about the extension of the border closure to non-essential travel along the Canada-U.S. and U.S.-Mexico borders.

“A Canadian can fly in a plane with more than 100 strangers to the U.S. but my wife and I cannot drive fully-vaccinated in our own car across a U.S. land border!” wrote one Twitter user.

An American Twitter user also lambasted the U.S. government for failing to restore the normal flow of travel across the Canada-U.S. border.

“This is a failure of the U.S. to put procedures in place to allow safe travel to resume,” she wrote. “Not just land borders but (the proclamation “Suspension of Entry as Immigrants and Non-immigrants of Certain Additional Persons Who Pose a Risk of Transmitting Coronavirus Disease 2019”) entirely. We look like buffoons.”

Several questioned the rationale for the extension of the ban, arguing there could be ways to ensure the safety of Americans and still lift the travel ban.

“What on Earth is this policy based on?” asked one Twitter user. “All other western nations have border policies based on negative tests and vaccine status. What nonsense ‘science’ are you following and why won’t you publish the data to back up your policies?”

When the U.S. first decided to keep its border closed until Aug. 21, Democrat Congressman Brian Higgins was infuriated by the American government’s decision.

In a tweet today, he called his own government’s refusal to re-open a huge mistake.

“The failure to make opening the U.S. – Canada border the priority that it should be is a huge mistake,” tweeted the congressman. “It is beyond disappointing; it is hurtful both at a human and economic level.”

Higgins, who co-leads the Northern Border Caucus and Canada-U.S. Interparliamentary Group was pleased by Canada’s decision to re-open the border. He slammed Washington for refusing to do the same, saying there “no excuse” for the United States keeping the border closed.

Along the border, at least some business people agree.

“The ignorance or the stupidity or both here by the Biden administration on the non-re-opening of the U.S. land border to fully-vaxxed Canadians is not only hurtful to so many people missing family but all those businesses in the U.S who rely on Canadian tourist dollars!” tweeted automotive consultant Lorrie Goldman.