The Definition of a ‘Refugee’ Narrows Under the Liberals

The story is brought to light of a Syrian national who left his war torn home in Syria, Homs, before the civil war began, moving to Dubai for work in 2010. Six months before moving to Istanbul last year, his parents received a letter ordering their son to report for military service in the Syrian army. His family immediately advised him never to come home as this would mean he would be taken directly from the airport to military training. Ismail represents a growing subgenre of refugees, draft dodgers, and similar people fleeing regime-held areas in general. 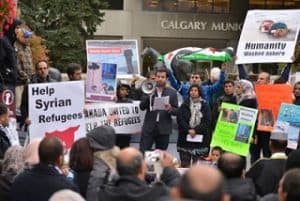 After losing his job and having his visa revoked in the United Arab Emirates, the individual was forced to become a refugee in Turkey, one of millions waiting for an opportunity to start a new life in Europe.

In Canada, the new Liberal government barred single men from its plan to resettle 25,000 Syrians here disqualifying an estimated 70,000 draft dodgers who are predominantly single males. According to an August 2014 report published by the Immigration and Refugee Board of Canada, military-aged men are the “most vulnerable” of any Syrians returning home.

For almost a year now, European Union leaders have struggled to stem the flow of refugees arriving in Greece from Turkey. Economic migrants were the first to face deportation from Europe last year and specific nationalities were targeted: Albanians, Armenians, Pakistanis, sub-Saharan Africans and this year Afghans have been added to the list.

On March 8, a day after Turkey and the European Union agreed in principle to a deal to contain the flow of refugees, European Commission President Jean Claude Juncker announced “irregular migrants”  or those not fleeing actual fighting, would retain refugee status but still be shipped back to Turkey and “put on the bottom of the list” for resettlement.

The plan has come under fire from Amnesty International and other human rights groups who have accused Europe of ignoring the rights of refugees, while also breaking international law by designating Turkey a “safe third country” for refugees.

According to the head of Amnesty International’s European Institutions Office, Turkey has forcibly returned refugees to Syria, and many refugees in the country live in desperate conditions without adequate housing.

In mid-February of this year, President Assad announced a general amnesty to deserters and draft dodgers. Men of military age were given until mid-April to turn themselves into Syrian authorities. But many are skeptical as stories abound of what happens to a deserter if one return back to Syria. Many stories are told that deserters are sent straight to the frontlines.

Draft dodgers are essentially being punished by Europe for being draft dodgers and will be punished for the same crime by the Syrian regime if they return. People who refuse to serve in the Syrian army because they don’t want to be involved in violations of international law clearly should be granted refugee status.

With a deal between Turkey and the EU soon to be implemented, many young men along with potentially hundreds of thousands of others deemed unworthy of protection will face intense rejection from the very governments they hoped would protect them.