August 11, 2017 – Canadian legislation to set up new U.S. border pre-clearance at airports, train stations and ferry ports has been held up over concerns about the powers granted to U.S. agents operating north of the border. 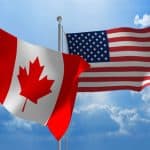 A slew of emails were submitted to the Prime Minister’s Office after articles in the national press highlighted the powers U.S. officers would have at their disposal.

Canada-U.S. relations, particularly on immigration, have been strained since Donald Trump became president and began his crackdown.

The reaction of the Canadian public is related to what they see happening in the U.S., particularly with Trump’s move to ban immigration from six Muslim countries.

In March, Prime Minister Justin Trudeau sought to reassure Canadians they will be protected when screened by US officials.

Trudeau said in March: “When you’re doing preclearance in Canada, the Canadian Charter of Rights and Freedoms and Canadian laws are in place, so there is extra protection when Canadians go through American customs in Canada because they are protected by the Charter on Canadian soil.”

Trump’s crackdown also means the number of immigrants crossing the Canadian border and claiming asylum has spiked in recent weeks.

Quebec immigration officials estimate 150 newcomers per day are crossing the border, forcing Montreal’s Olympic stadium to be used as a holding centre.

A camp has also been set up on the Quebec-New York border to accommodate some of the asylum seekers.