May 16, 2017 – New York taxi companies have admitted bumping up fares for illegal immigrants trying to flee the U.S. and become refugees in Canada. 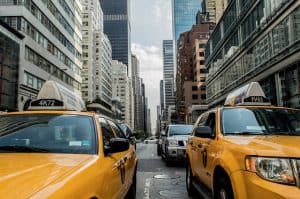 Three companies operating in the city of Plattsburgh will pay financial penalties after engaging in practices including price gouging, the New York Attorney General’s office has reported.

Northern Taxi, Town Taxi and C & L Taxi will pay fines of up to $2,500 after they failed to post ‘rates as required by law’, the Attorney General said.

Illegal immigrants have been increasingly trying to cross the U.S.-Canada border in recent months to flee the crackdown by Donald Trump’s administration.

The immigrants seek out remote border crossing locations to make their way into Canada. During winter months, it meant braving potentially dangerous conditions to escape the US. The number making the trip is expected to increase as the weather improves.

“It’s no secret that we’ve seen intense fear in immigrant communities across New York in recent months,” he said in a statement.

Canada has also sought to play down the matter, with Immigration Minister Ahmed Hussen saying the numbers are so low that a trend is yet to be established.

However, Prime Minister Justin Trudeau is under pressure from both sides – to let people in and provide refugee protection and to ensure they do not present a security risk.

The issue has raised questions around the Safe Third Country Agreement, signed by both Canada and the U.S.