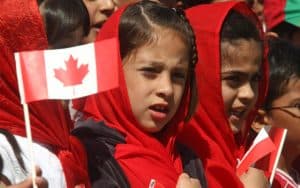 Jan 8, 2018 – Immigrants to Canada can expect their children to enjoy the best educational and economic outcomes as compared to all other nations of the world.  This is the primary finding of an undated government report by Garnett Picot, an expert on economic integration of immigrants and earnings inequality at the Queen’s University School of Policy Studies.

An assessment of the country’s immigration system raises some very interesting findings including two less-celebrated successes that, in the current global context, are truly unique to Canada.

According to the report— The Educational and Labour Market Outcomes of the Children of Immigrants: A Success to be Preserved.—the fact that children of immigrants enjoy significant educational and economic success is an achievement unique to Canada. Secondly, both immigration and immigrants are perceived positively by Canadians. Both these successes, the report finds, are not evident in other countries including European nations or the USA.

Canada owes much of its immigration success stories to the fact that children of immigrants enjoy the best educational outcomes in this country. Children from Asian immigrants like Chinese or Indians have been consistently outperforming children of Canadian born parents in education.

The report attributes the educational achievements to a variety of factors including:

That the child’s family income does not impact education in Canada seems to have helped since economic outcome data shows that first-generation immigrants face the highest disparity in income as compared to native Canadians.

In terms of economic outcomes, immigrants don’t do as well as might be expected from them owing to raised levels of education among them. However, the study finds that second-generation immigrants face a much smaller economic deficit with their Canadian peers as compared to first-gen immigrants.

This indicates that, for immigrants, economic integration and parity is a process spread over multiple generations that, no doubt, accelerates as education levels rise. Generally, children of immigrants enjoy economic benefits at par or, in some cases like the Chinese, better than Canadians.

While acknowledging that nations with unique strengths and weaknesses cannot be compared to assess the condition of immigrants, the report notes that distinctive similarities between Canada and Switzerland facilitates comparison and analysis of how the immigration system and the immigrants have performed in the respective countries.

Education outcomes among immigrant children are lower in Switzerland because of poor performance in high school. The child’s socio-economic background and educational qualification and ethnic group of parents contribute to the poor performance, which has a significant impact due to the country’s streaming process.

The streaming system allocates those who perform poorly to less academic streams, which often means immigrant children rarely get the opportunity to catch up later in life.

Until the recent shift to skilled labour, Switzerland focused on low-skilled immigrants, which obviously impacted children’s educational achievements as Canada invites immigrants from nations like China and India where, conventionally, parents have always treated education as an essential and imperative requirement for success in life.

Further, poor performance in high school does not seem to put immigrant children at a disadvantage in Canada. Inferior educational achievements impacts economic performance adversely even as children in Canada enjoy better opportunities to bridge the economic gap though access to quality education.

The report highlighted specific steps to ensure Canada continues enjoying future success in integration immigrants and their children into the educational, economic, and social mainstream.