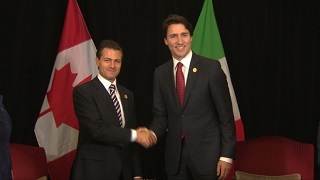 Mexico’s President Enrique Pena Nieto said that Trudeau confirmed the commitment during a recent meeting with Canada’s new prime minister at the G20 summit in Turkey.

The policy was imposed by the Conservative government in 2009 to reduce the number of Mexicans seeking asylum in Canada. The requirement had become a source of tension between the two countries.

According to Trudeau’s mandate letter to Dion it is essential to “support the minister of immigration, refugees and citizenship in lifting the Mexican visa requirement.” Another top priority is to “work with relevant ministers, including the ministers of international trade and environment and climate change, to prepare for the North American Leaders Summit in Canada.”

The Mexican president also said he and Trudeau discussed the trilateral annual summit between the prime minister of Canada, and the presidents of Mexico and the U.S., which Canada was set to host by year’s end.

Originally scheduled for February 2015, the summit was postponed indefinitely by the Conservative government. The decision to push back the summit came due to the looming general elections in Canada as well as a decision by the U.S. president on the pending approval of TransCanada’s proposed Keystone XL pipeline.