Life for the more than 1 million asylum-seekers who have fled Syria, Iraq, Afghanistan and other war-torn countries for Europe in the past year, has become intolerable. If European Union countries had worked together, the flow of refugees would have been manageable instead of the state of chaos it is in today. If order is not restored soon in Europe, political pressure could lead to a wave of border closures. 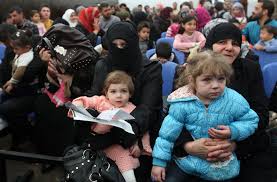 According to the UN, aid for Syrians was cut in 2015 even as the war grew bloodier and aid agencies received just over half of what they needed in 2015. Funds from Europe need to be used to feed and house refugees. Refugees should also be helped to find work in the host country. Funds from Europe could help teach the 400,000 refugee children in Turkey who have no classes.

The migrant crisis is causing increased xenophobia and the rise of right wing nationalistic political parties in parts of Eastern Europe. This could soon spread into France, Germany, Italy and the rest of the EU.

The crisis is also causing problems due to several economic migrants with no claim to asylum finding a place in the queue by lying about their country of origin. This system is flawed and must be replaced by one in which asylum applicants are screened when they first reach Europe’s border, or ideally even before they cross the Mediterranean.

While it’s highly unlikely that Syria’s civil war will end any time soon, the EU could do a lot more to help refugees and their host countries. The migrant crisis can benefit from a well-regulated three-step system. The first is to increase aid to refugees, especially to victims of the Syrian civil war. The second step is to review asylum claims while refugees are still in centres in the Middle East, where they go when they first arrive in the EU. The third step is to make sure that asylum-seekers don’t head to the host country without permission and stay in one place until their applications are processed.

It is also important to deport or refuse entry to ineligible migrants.  Yet it is potentially problematic to repatriate people to some countries such as Syria. It is imperative that asylum-seekers register and their claims processed as close to home as possible, probably Turkey, Lebanon and Jordan. There should also be processing camps in the first EU country they reach.

Even if a concerted strategy is implemented, easing the flow of migrants into Europe will require plenty of financial resources.   The EU must come together to resolve this problem.