February 22, 2017 – Montreal has been declared a sanctuary city for immigrants without documentation, following a drive by the Quebec city’s mayor.

A motion put forward by Mayor Denis Coderre has been unanimously adopted by the Montreal City Council.

It means undocumented migrants will get access to city services including shelters, food banks and housing without being reported to federal authorities. 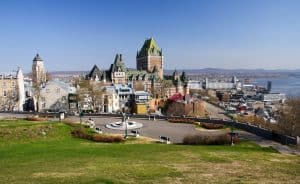 “A lot of these people are victims. They’ve been victims of terrorist acts, they’ve been kicked out of their country or left because of their situation – from sexual orientation to political refugees,” Coderre said.

“Some of them have been here six, seven, eight years.”

Montreal joins the Ontario cities of Toronto, Hamilton and London, as well as Vancouver in British Columbia as cities which have declared sanctuary status.

Critics say the move is merely symbolic, and that now Montreal needs to make tangible policies to help vulnerable people in the city.

Quebec is currently dealing with a surge in illegal immigrants crossing the border from the U.S.

Five times the number of people entered Quebec from the U.S. illegally in 2016 compared to the previous year, according to Canada Border Services Agency figures.

The notable increase – to more than 1,200 claiming refugee status in 2016 – comes as immigrants look to flee a crackdown from the Donald Trump administration.

New U.S. Department of Homeland Security guidelines demand the mass arrest and detention of those in the U.S. without status.

The document, issued by DHS Secretary John Kelly on February 17, 2017 and which calls for the hiring of thousands of enforcement personnel, outlines how the federal government plans to tackle illegal immigrants in the United States.

It follows in the wake of President Donald Trump’s Executive Order banning immigration from seven Muslim-majority countries and suspending the U.S. refugee program.