June 7, 2017 – An immigrant integration expert says the key to successful policy is for newcomers and Canadians to work together in pursuit of a harmonized society.

In an interview with CBC, Mosaic director Ninu Kang says that while new immigrants can do more to put themselves out there, Canadians should also reflect on why they prefer to stay in their cultural groups.

Mosaic is a non-profit that specializes in the settlement of both immigrants and refugees. With more than 40,000 Syrians welcomed to Canada in 2016 integration is more important than ever, particularly when the newcomers are coming after a period of crisis. 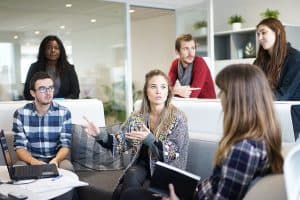 “I absolutely think it’s incumbent on immigrant communities to branch out,” Kang told CBC. “But the question we have to ask ourselves is why do they feel more comfortable living together?”

“Are we, the other neighbourhoods welcoming them? Or are we shoving them back into their own silos because that’s where the comfort is, that’s where they’re not going to experience racism and neighbours using racial slurs on them?”

The integration issue is a hot topic for Canadian politicians looking to get immigration policy right. The faster a new immigrant or refugee can be integrated, the faster they are supporting themselves and not relying on the benefits system.

Every day in 2017, more Syrians reach their one-year anniversary here, meaning they no longer qualify for specific refugee benefits, instead relying on the same benefits system as Canadians.

Tweaks to immigration programs by the current federal government have always held faster integration as a central target.

Under changes made to Canada Express Entry on June 6, 2017, candidates were given the chance to score points for having a sibling in Canada. Such family connections can be crucial when starting a new life in another country.

Previous changes enacted in November 2016 saw the 600 points for a job offer lowered in order to give more weight to core factors such as education and experience. The hypothesis is that better qualified, better experienced individuals will have longer-term integration success than a candidate coming in to do a specific job.

The new Atlantic Immigration Pilot (AIP) launched by the federal government in partnership with Nova Scotia, Newfoundland & Labrador, New Brunswick and Prince Edward Island comes with the requirement for a settlement plan.

This includes a needs assessment before immigration, before each newcomer is given a plan with information about the community they are moving to and where they can get help after arrival.

The settlement plan is also geared towards ensuring AIP candidates stay in the provinces they move to. Integration and retention are undeniably linked in that an integrated immigrant is significantly more likely to also become a retained immigrant.

The majority of new permanent residents end up settling in big cities like Toronto, Vancouver and Montreal. Although several Canada immigration ministers have tried to tackle the issue, they have all been unsuccessful.