May 10, 2017 – The positive opinion towards Canada immigration has strengthened in the last six months, according to a new Environics survey.

Despite growing anti-immigration sentiment around the world, particularly in the US, most Canadians believe Canada is right to keep its borders open.

“Canadians’ opinions about immigration remain as positive, if not more so, than last measured in October 2016,” the Environics report said.

“Most continue to disagree that the country is taking in too many immigrants, and there remains a broad consensus that immigration benefits the economy.”

The results refute the suggestion of a rising anti-immigration sentiment in line with what is happening south of the border.

Opinions appear to be strengthening against Trump and the wave of protectionism sweeping politics in the developed world.

Despite accepting more than 50,000 Canada refugees since the Liberal government came to power in 2015, scepticism about the legitimacy of claimants has diminished.

And while the concern about whether immigrants are adopting Canadian values remains, it has dropped to a record low level in a survey conducted at regular intervals since 1976.

Environics conducted the research between April 3 and April 15, 2017, making a series of statements to 2,002 Canadians and asking them to agree or disagree.

Statement 1: ‘Overall, there is too much immigration in Canada’

A significant 62 per cent disagreed that Canada is taking in too many people from other countries, according to the Environics results.

For this survey, that represents the highest level since 2008. Some 35 per cent agreed with the statement, down two percentage points from six months ago. 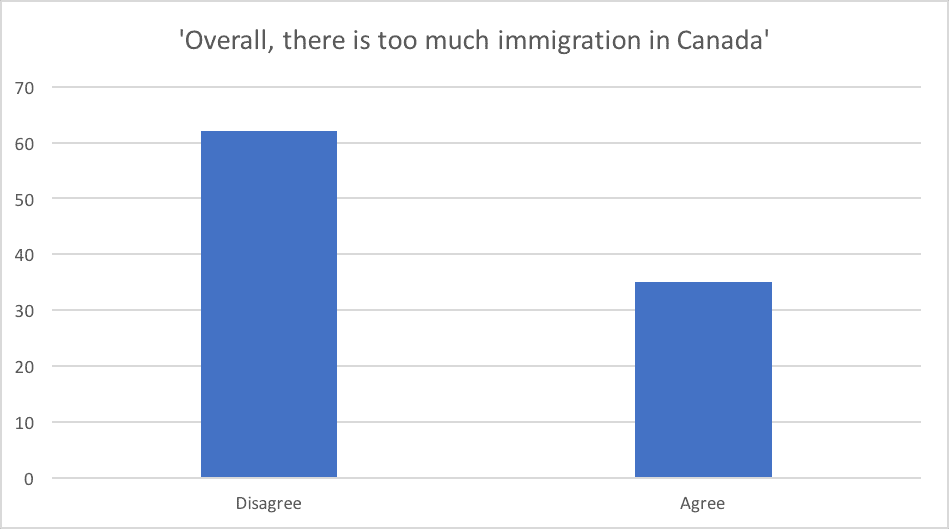 Provincially, the disagreement was strongest in British Columbia and has strengthened the most in Ontario and the Prairies. The most concern about Canada immigration levels was shown in Alberta, where 45 per cent agreed with the statement.

Statement 2: ‘Overall, immigration has a positive impact on the economy of Canada’

The strong belief that immigrants have a positive impact on Canada’s economy was again reflected in the latest Environics poll.

An overwhelming majority of 78 per cent agreed with this statement, slightly down on the number from six months ago but in line with the last 15 years of responses to this question.

Among younger Canadians, the agreement percentage rose to 85 per cent, while in Alberta, where the economy has been struggling, just 69 per cent agreed, a drop of six percentage points from six months ago.

Statement 3: ‘Most people claiming to be refugees are not real refugees’

Canada has welcomed more than 50,000 refugees in the last 18 months, and now many are trying to cross the border illegally to escape Trump’s America.

But despite attempts by some to foster concern over the types of people seeking refuge, the Environics survey suggests the opposite is the case.

A rising percentage (49%) now disagree with the statement, up a significant five percentage points from six months ago. “Disagreement is now at its highest level since this was first measured in 1987,” the Environics analysis said. 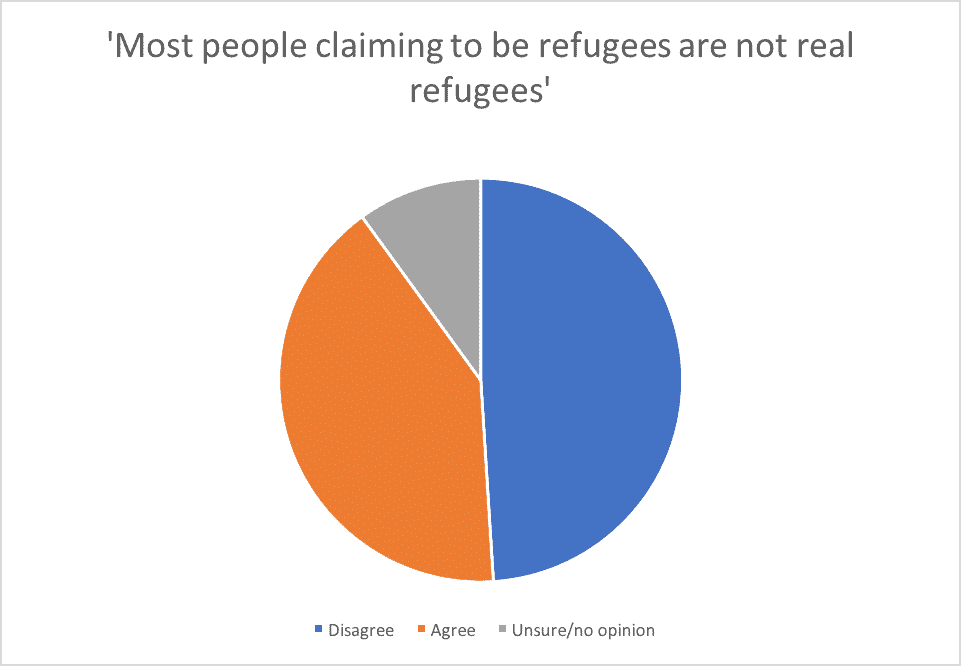 Statement 4: ‘There are too many immigrants coming into this country who are not adopting Canadian values’

This question has long been the most sensitive issue for Canadians, and one which Conservative leadership candidate Kellie Leitch has sough to exploit in her campaign.

More than half of Canadians (54%) agreed with the statement in the latest survey, unchanged from six months ago. This represents the lowest level for more than 20 years.

Provincially, some 65 per cent of Albertans agreed with the statement, up eight percentage points in six months, while 59 per cent agreed in Quebec, up two points. In B.C., an unchanged 47 per cent said they agreed.

Answers to this question varied wildly depending on age, with 61 per cent of over 60s agreeing and 44 per cent of those aged 18 to 29.

Surveys such as this will always be an imperfect way of measuring public opinion, but it is impossible to ask every Canadian what they think.

Given how long the Environics Institute has been asking these questions, the results represent some of the most reliable out there on gauging Canadian opinion.

The results show Canadians are not being drawn along the path to protectionism that saw the US elect Donald Trump as president.

Instead, Canada is looking to forge its own path as world leader on pro-immigration policies.