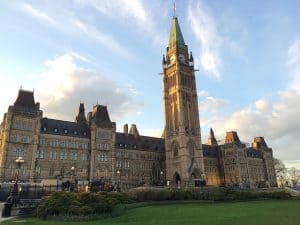 December 11, 2017 – Canada’s federal government is contracting out the Canadian citizenship test to the private sector.

Immigration, Refugees and Citizenship Canada (IRCC) has put out a request for companies to generate a pool of 400 multiple choice questions, a blueprint for how the test will look, and 15 versions of the test.

The government immigration department does not reveal how much it wants to pay the contractor, but the deadline for proposals is mid-January for a contract expected to last 12 months.

A new test is required in conjunction with an ongoing overhaul of the study guide produced for those preparing to become Canadian citizens. No date has been confirmed for either the rollout of the study guide or the test, although it would make sense for both to happen at the same time.

As part of the government’s request for proposals related to the test, it noted the guide is undergoing ‘significant revisions’, meaning the test ‘will need to be updated to reflect the new version’.

A draft version of the study guide leaked in July was controversial because it did not feature a warning on ‘barbaric cultural practices’ included in the current edition. The section was inserted by the previous Conservative government in the previous overhaul, which took place in 2011.

Further changes in the daft included more detail about Canadian discrimination against Chinese people, South Asians, Jews and the disabled. There was also an expanded section on LGBTQ rights, the residential school system and on the history and current lives of Canada’s Indigenous Peoples.

It should be noted that this was a draft and it is not known if the changes will end up in the final version.

How the Citizenship Test Works

The Canadian citizenship test is designed to ensure candidates know about Canada’s history, politics and geography, among a number of subjects. It is one of a number of requirements for becoming a citizen.

Candidates must score at least 15 on a 20-question test, and are given a second chance if they fail. Those who fail a second time have to meet with an immigration officer who assesses if they meet requirements. If a candidate fails this face-to-face test, they are refused.

The current test has been criticized for being over-positive about Canada’s history and its current global standing.

Canada’s Citizenship Act is currently undergoing a number of changes following the successful passing of Bill C-6 on June 19, 2017. Two of three waves of changes have already been implemented, with the final wave expected in early 2018.

The key change related to the citizenship test was enacted as part of a wave of alterations that came into effect on October 11, 2017. This saw the age range of those required to take the test change to 18 to 54, from 14 to 64.

Other important changes implemented in October included the reduction of the physical presence requirement for permanent residents to qualify for citizenship, from four years in six to three years in five.

Summary of Changes That Took Place in October 2017

The new changes are the second wave to take place after Bill C-6 was given Royal Assent on June 19, 2017.

The first wave, which happened immediately upon the passing of the bill, included the removal of citizenship revocation powers, the declaration of intent to reside requirement and a move to allow minors to apply for Canadian citizenship.

Summary of Changes That Took Place in June 2017

Meanwhile, a third wave of changes are planned to take place in early 2018, the foremost of which is to return power to the Federal Court in all citizenship revocation cases. Currently, the immigration minister can revoke citizenship on the grounds of false representation, fraud, or knowingly concealing material circumstances.