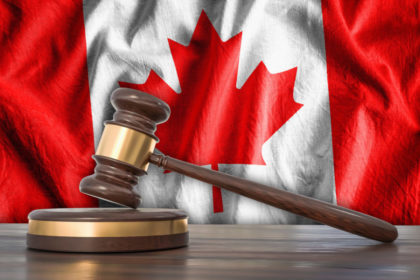 Canada immigration authorities issued the second-most Express Entry Invitations to Apply on record in the third quarter of 2020, putting the system on track for a record year.

Immigration, Refugees and Citizenship Canada (IRCC) issued 28,450 Invitations to Apply (ITAs) between July and September, second only to the second quarter of 2017 when 29,855 invites were issued.

September saw the most ITAs issued in a calendar month on record, with 12,600 candidates receiving invitations through three all-program draws.

The prolific quarter means IRCC has now issued 78,350 ITAs so far this year, almost 9,000 more than at the same stage of any previous year since the system was launched in 2015.

It means Canada is firmly on track to break the annual record for ITAs, which currently stands at 89,800, set in 2018.

The current high numbers of ITAs have been issued against the backdrop of the coronavirus pandemic, meaning that, since March, international travel restrictions have been in place and the Canada-U.S. border has been closed to non-essential traffic.

While those issued with ITAs since March 18 are free to submit their immigration applications, candidates applying from outside Canada are currently unable to travel here. 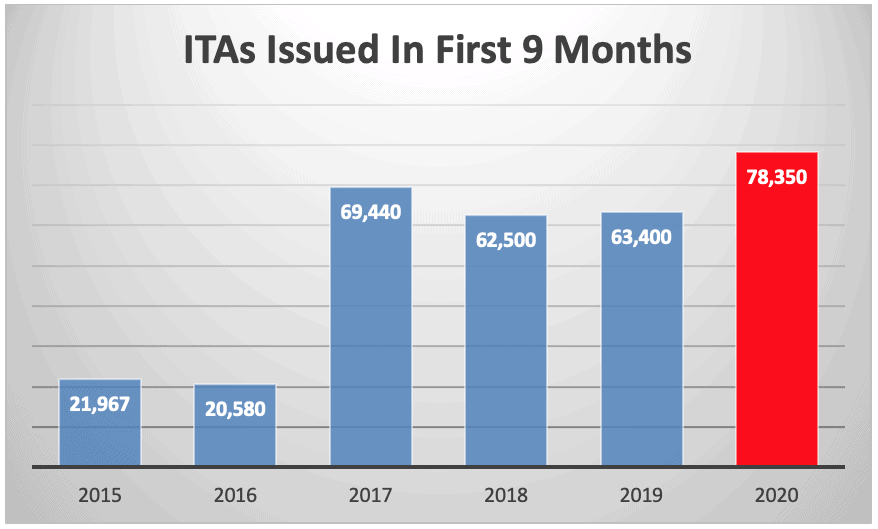 During the COVID-19 crisis, the federal government has consistently reiterated its commitment to immigration as an important driver of economic growth.

The continued high numbers of ITAs mean Canada is well placed to quickly increase immigration numbers as and when restrictions are lifted.

IRCC is creating a bank of candidates who have received ITAs and submitted applications in anticipation of restrictions being lifted.

However, with restrictions still in place, it is unrealistic to expect the pre-coronavirus target of 341,000 new permanent residents in 2020 to be reached.

The third quarter saw IRCC move away from its strategy of conducting program-specific draws aimed at Canadian Experience Class and Provincial Nominee Program candidates because of the coronavirus pandemic.

Candidates in the two categories were more likely to already be in Canada than those coming through other Express Entry-linked programs, meaning they were less likely be affected by pandemic-related travel restrictions.

By September, IRCC had returned to its pre-coronavirus strategy of conducting all-program draws every two weeks.


As already mentioned, the third quarter of 2020 featured the second-highest number of ITAs of all time for a three-month period, at 28,450.

The 27,300 ITAs issued in the second quarter of this year is also the joint third highest. It means that, despite the coronavirus crisis, Canada has seen two of the top five Express Entry quarters in terms of ITAs issued.

Meanwhile, the first quarter of 2020 features seventh on the all-time list, with 22,600 ITAs issued. 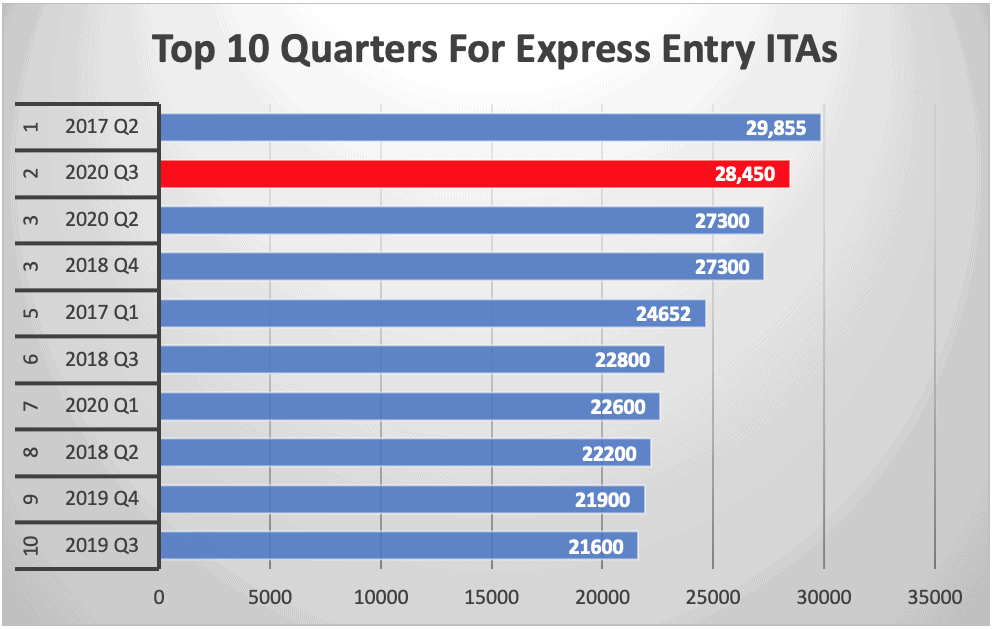 The three most significant draws of the quarter all came in September, each seeing 4,200 ITAs issued. These are the joint second-largest draws of all time through Express Entry, and saw September become the most prolific Express Entry month of all time for ITAs.

Before September, IRCC conducted a combination of program-specific and all-program draws, including two draws aimed at CEC candidates, two at PNP candidates and one targeting Federal Skilled Trades Program (FST).

A total of 10 draws took place throughout the quarter. 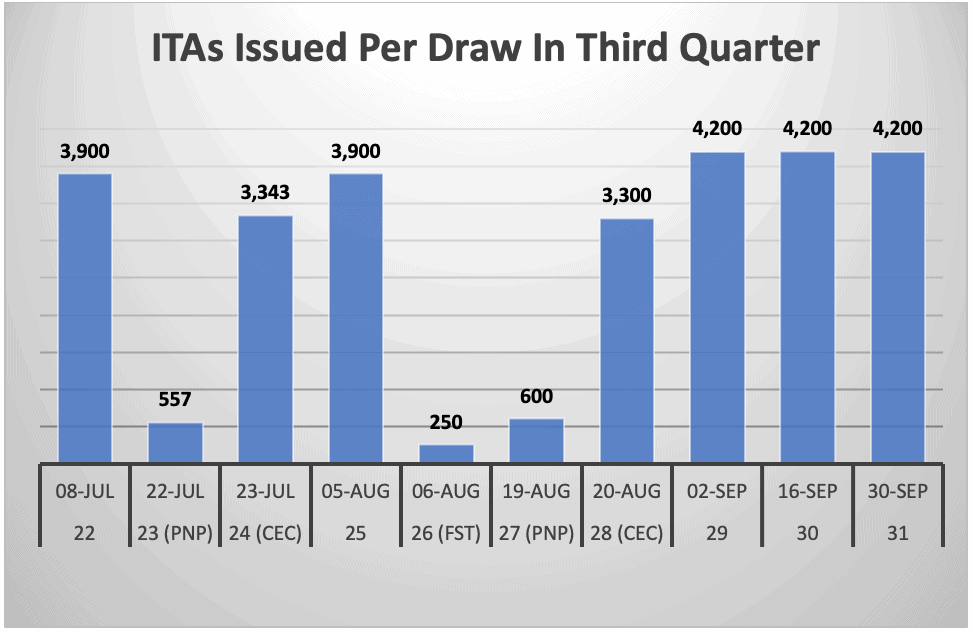 After zero all-program draws took place in the second quarter, five were conducted in the third quarter, with ITA totals ranging from 3,900 to 4,200.

Minimum Comprehensive Ranking System (CRS) scores declined from 478 in the first draw of the quarter on July 8, to 471 in the most recent draw on September 30.

Minimum CRS scores in all-program draws during 2020 have generally been higher than previous years. 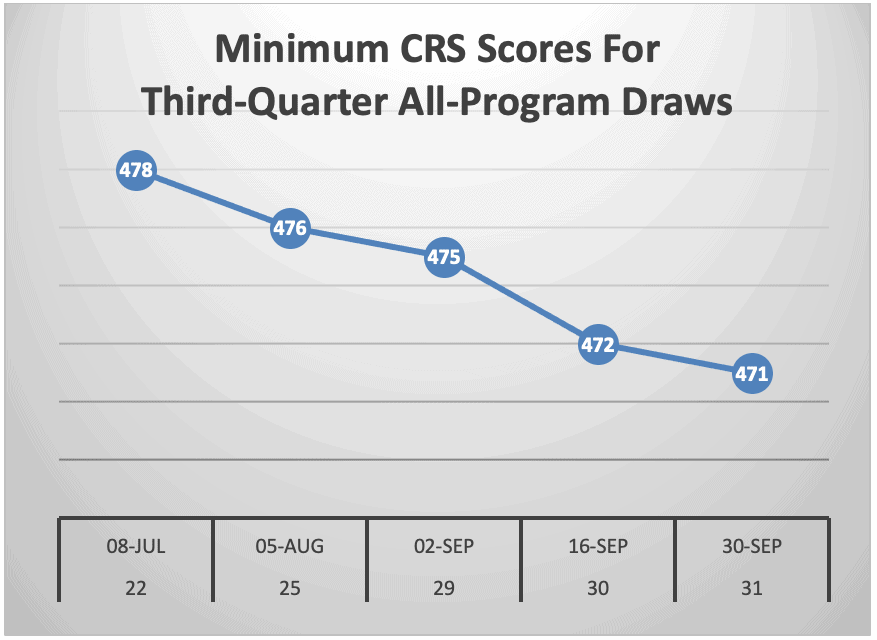 The large gap between the draws (four weeks) meant that, after bottoming out at 431 in the final draw of the second quarter, minimum CRS scores rose to 445 and 454 in the two third-quarter draws.

With the most recent CEC-focused draw happening on August 20, it is not known if IRCC is planning to return to program-specific draws in the remainder of the year. 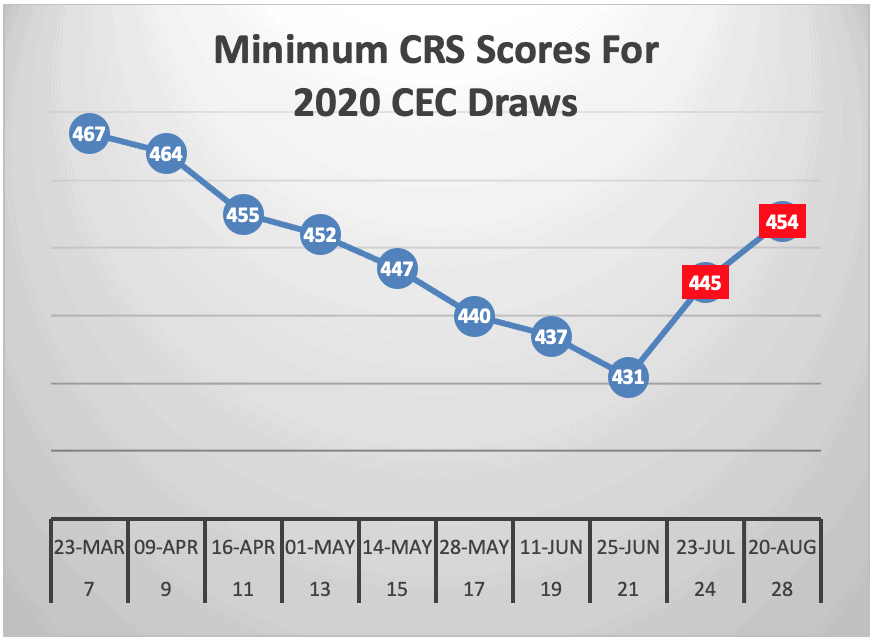 Two PNP draws were paired with the two CEC draws in the third quarter, with 557 and 600 ITAs issued on July 22 and August 19 respectively.

PNP minimum CRS scores are higher than other programs because Express Entry awards 600 points to candidates with a provincial nomination. 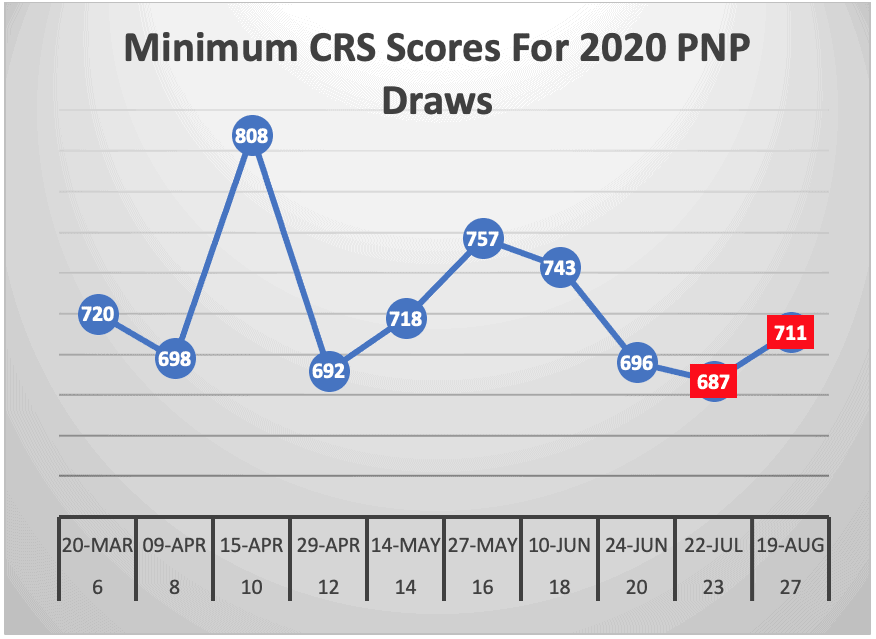 How Express Entry continues in the rest of 2020 is likely to hinge on how quickly the federal government removes international travel restrictions and opens the Canada-U.S. border.

Until now, IRCC has continued to issue ITAs in the same and larger numbers as previous years, but that cannot go on forever with the borders closed.

Canada is currently battling a second wave of COVID-19, and the success it has with that will determine whether or not it can ease restrictions by the end of the year.

It will also depend on how other countries are able to stop the spread of the virus as to whether Canada feels confident enough to welcome newcomers.

For now, it seems IRCC is well on target to break its ITA record, while minimum CRS scores for all-program draws are unlikely to fall much below the 470 mark.

Expect monthly Canada immigration levels to reach pre-coronavirus numbers once restrictions are eased, be that before the end of 2020 or into 2021.