With Canada facing growing criticism for its strict refugee policy, demonstrators across Canada are holding rallies and marches demanding changes to the country’s immigration policies. 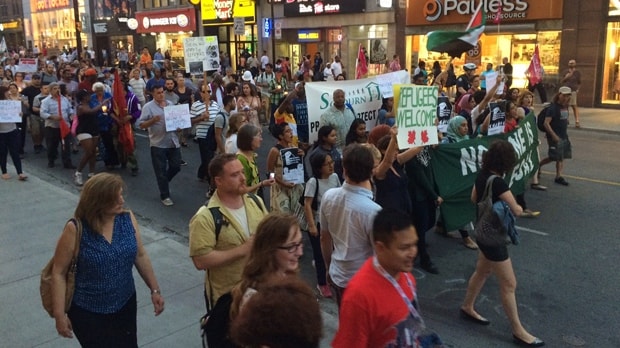 From Victoria to Hamilton to Vancouver, local communities have planned protest marches and candlelight vigils in support of the refugees fleeing Syria and other war-torn countries.

It reflects collective acts of protest against the atrocities that we are seeing overseas and the lack of care and compassion that Canada, the United States and Europe are showing to refugees.

The powerful photo of three-year-old Alan Kurdi’s lifeless body washed up on a Turkish beach has prompted the widespread outrage at the inaction of the Canadian government.

The numbers are still “a drop in the bucket” compared to the hundreds of thousands of refugees displaced, says one advocate.

Prime Minister Stephen Harper says that changing the refugee policy alone is “not a solution,” adding that Canada must aim to “fight the root cause of the problem and that is the violent campaign being waged against these people by ISIS.”