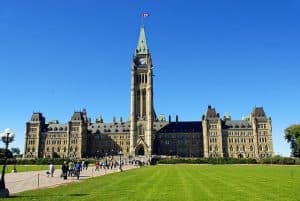 June 1, 2018 – A new federal government report reveals the data behind what was a record-breaking year for the Canada Express Entry System in 2017.

History was made on almost every statistic associated with the program.  This includes Invitations to Apply, minimum Comprehensive Ranking System scores and largest individual Express Entry draws.

Some of the key statistics include: 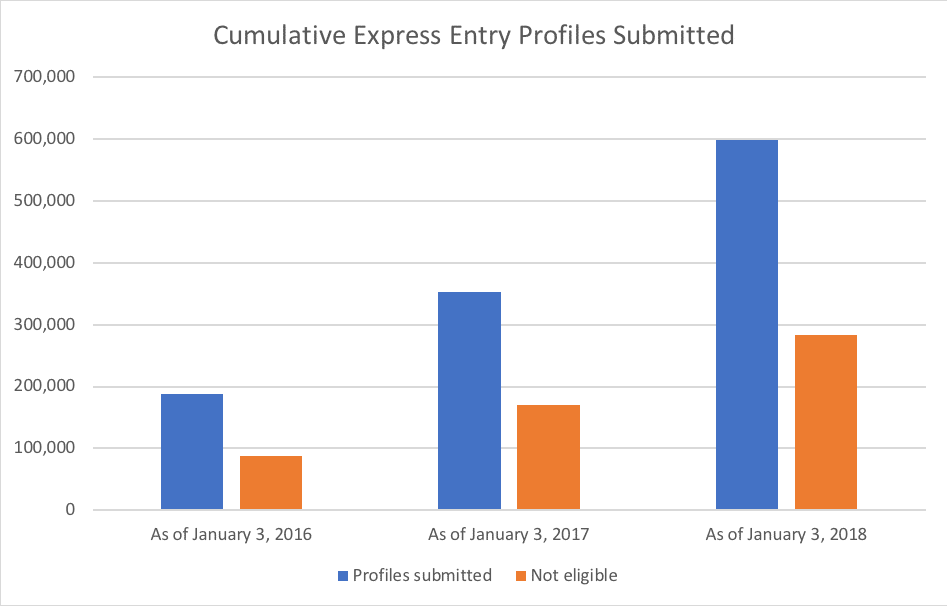 The Federal Skilled Worker and Canadian Experience Class dominated the statistics when the invitations issued are broken down by program.

The FSW by itself accounted for approaching half of all invitations in 2017, with 41,364 candidates invited to apply for the program. Compared to the 8,332 invites issued through Express Entryfor the FSW in 2016, this represents a 400 per cent increase. The CEC increase was less dramatic, but still significant, with the program accounting for 35,020 invites in 2017, up from 15,102 in 2016. The nature of the two programs means they will attract candidates with high core human capital scores, making it no surprise they dominate the numbers.

Invitations to candidates with provincial nominations were a distant third in 2017, while there were less than 1,000 Federal Skilled Trades candidates receiving ITAs. Just one of these FST candidates was invited via a general Express Entry draw, indicating why IRCC conducted its first FST-only draws in 2017, inviting a total of 905 candidates. Skilled Trades candidates would have no chance of qualifying for an invitation if it was not for the program-specific draws, which have continued into 2018. This was a result of the reduction in points for a qualified job offer, introduced in November 2016. Skilled Trades job offers were generally worth 50 points following the changes, down from 600 point per-November 2016. IRCC said that PNP draws were conducted alongside FST draws in order to manage the numbers of candidates receiving a provincial nomination in the Express Entry Pool. 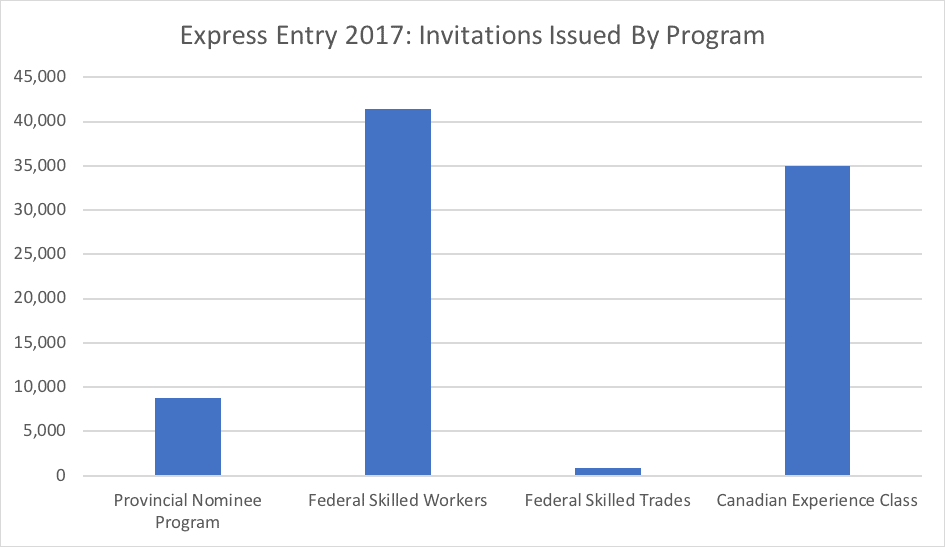 Candidates already resident in Canada dominated the figures when broken down by residency, with more than 42,000 of those receiving invites already living here. This shows how important the Temporary Foreign Worker Program and International Mobility Program have become to Canada’s core annual immigration intake. 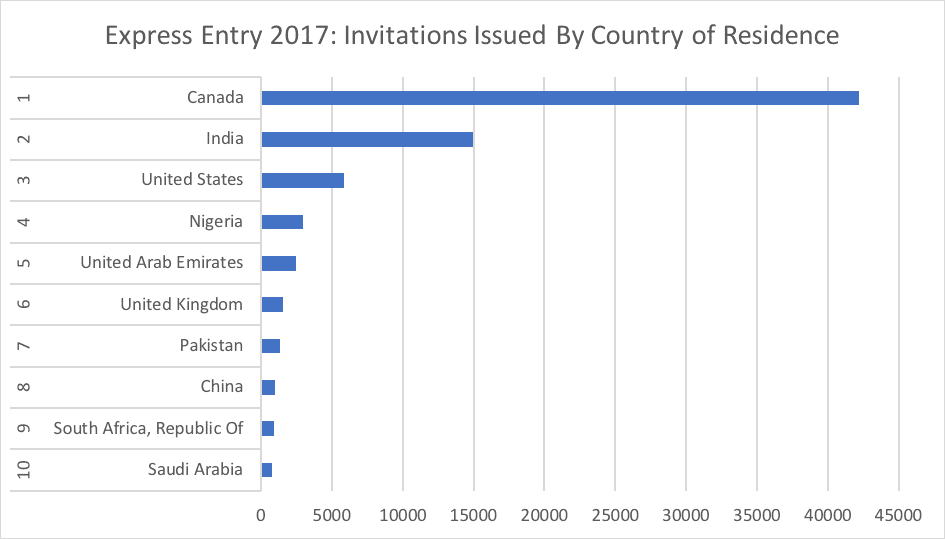 However, when looking at the invitations issued by citizenship, Indians strengthened their dominant position, accounting for 42 per cent of all invites in 2017, compared to 33 per cent in 2016. In 2017, 36,310 Indian citizens were invited through Express Entry. The second most prolific citizenship was Chinese, with just 7,466 invitations. 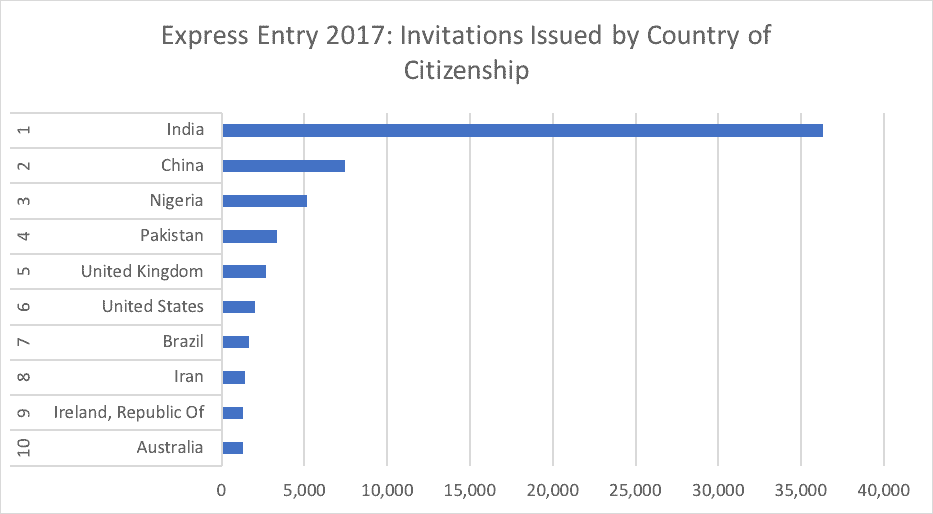 Changes to CRS points awarded for a qualified job offer in November 2016 had a significant impact on the primary jobs of immigration candidates, according to the Express Entry data for 2017.

The changes were made because IRCC felt too much importance had been placed on the job offer by awarding 600 points. By reducing the points available to 200 or 50, depending on the skill level of the position, the intention was to give more weight to core Express Entry human capital factors such as age, education, employment history and language ability.

In 2016, Cooks and Food Service Supervisors figured high on the list of top 10 occupations, but the 2017 top 10 tells a different story.

Information Systems Analysts and Consultants were top with more than 5,200 invitations, with Software Engineers second and Computer Programmers third. This fits with Canada’s strategy of using immigration to make up a technology talent shortage. Indeed, the entire top 10 for 2017 includes managerial and professional occupations aligned with shortages in the Canadian labour market. With Express Entry intended as a selection tool for skilled economic immigrants, the top 10 of 2017 better fits that profile than the top 10 of 2016.

The figures also show the healthy relationship between applications received, applications approved and visas issued. One of the key attributes of the Express Entry System is that candidates self-evaluate, meaning the calibre of candidate entering the pool is already higher. As such, when they eventually come to submitting applications, they are more likely to be successful. In 2017, 109,497 applications were received and 93,596 visas issued. 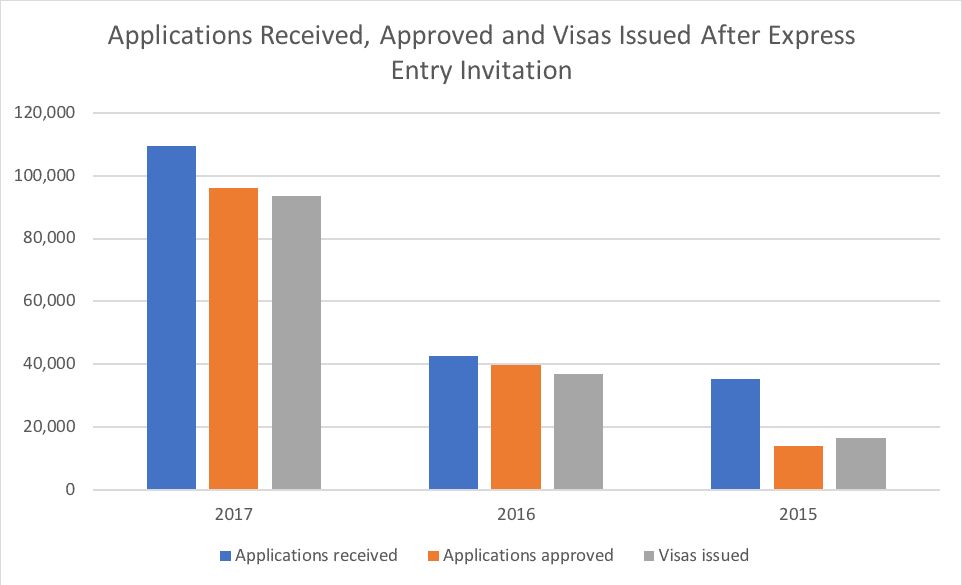 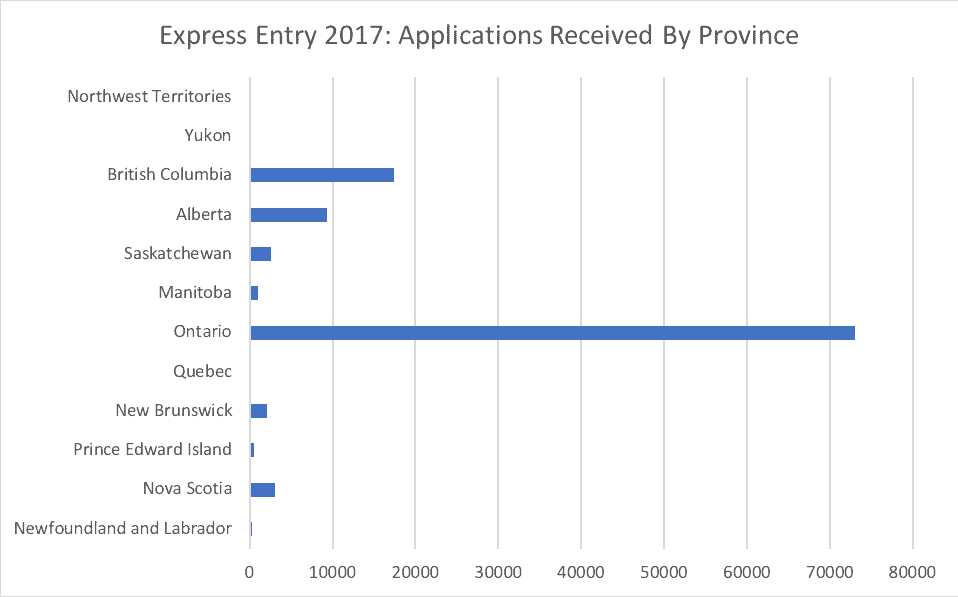 IRCC has altered CRS points in two waves since Express Entry began, the first in November 2016 and the second in June 2017.

The changes were intended to ensure the candidates accepted were better aligned to Canada’s economic needs, and more likely to integrate and achieve long-term economic success in Canada. As well as the changes, the numbers of points for a provincial nomination remained at 600, effectively guaranteeing an invitation in the next Express Entry draw.

Points available drop to 200 or 50, depending on the skill level of the job. Senior managerial positions (National Occupational Classification 00) worth 200 points, while all other qualified job offers (NOC 0, A or B) worth 50 points.

Candidates score 15 additional points for a level 7 in listening, speaking, reading and writing in the Niveau de Competence Liguistique Canadiens (NLC) combined with an English score of 4 or below in the Canadian Language Benchmark (CLB).

Candidates with a sibling living in Canada awarded 15 extra points.

A more significant number of invitations went to candidates with Canadian education credentials in 2017. This shows Express Entry has been successful in attracting more international students to Canada, which is a stated sim of the current federal Liberal government.

In 2017, 11,435 ITAs went to candidates with two-years of Canadian post-secondary education, while 12,472 invites went to those with three-year post secondary, master’s, professional degree or doctorate.

Another of the federal government’s stated aims is to bring in more francophone permanent residents, and the 2017 Express Entry figures show they are having some success in doing that.

The Canada Express Entry System saw its most successful year in 2017.  Invitations dramatically increased for the numbers of candidates to apply for permanent residence. Comprehensive Ranking System scores declined steadily during the year.

Records were set for the lowest CRS score of 413 and the largest number of invitations, at 3,923, as IRCC looked to create an inventory of candidates from which applications were received.

Importantly, the year also showed the flexibility of the program, as immigration officials moved to make changes to how CRS points were awarded in order to ensure the right calibre of candidate was being invited.

This showed how the system can be modified as immigration policy changes, establishing it as the most cutting-edge immigration selection tool in the world.