2016 Census Reveals One In Five Canadians Are Immigrants 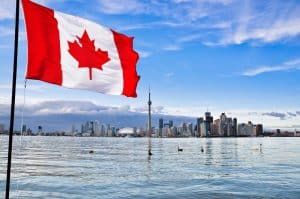 October 25, 2017 — One in five Canadians is now born outside the country, according to the latest batch of figures from the 2016 Census released by Statistics Canada.

The report revealed 21.9 per cent of the population either were or once were a Canadian permanent resident, or landed immigrant. The figure is nearing the highest proportion recorded since confederation, in the 1921 Census when 22.3 per cent of Canada’s population was foreign born.

Economic class immigrants dominated this number representing 60.3 per cent of newcomers, with 26.8 per cent in the family class and 11.6 per cent refugees.

Africa jumped ahead of Europe as the second most popular source continent of immigrants at 13.6 per cent, although that number is eclipsed by Asia, which accounted for 61.8 per cent of newcomers.

While over half of all recent immigrants still choose to settle in Toronto, Vancouver and Montreal, the latest Census showed more are settling in the Prairies and the Atlantic provinces. This is an important statistic for Canada’s immigration policy makers, who are tasked with the challenge of getting new immigrants to spread out across the country, in communities that need them the most. 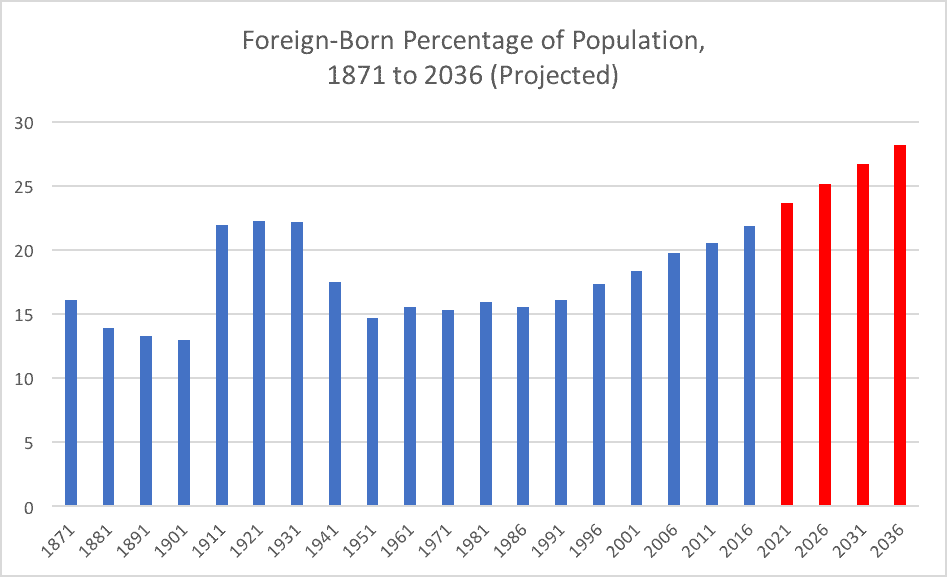 The 2016 Census showed Canada has 7,540,830 people who came here via immigration channels. As already mentioned, this number accounts for one-fifth of the current population, nearing the highest level since Confederation.

Over time, Census figures reveal the lower foreign-born population proportion between 1951 and 1991, between 14.7 and 16.1 per cent. Between 1991 and 2011, this proportion has steadily rose to 20.6 per cent, with the trend continuing with the latest Census.

Statistics Canada has projected the proportion will continue to rise to as much as 28.2 per cent by 2036, as larger numbers of immigrants are welcomed, the number of deaths rises and fertility rates continue to drop. 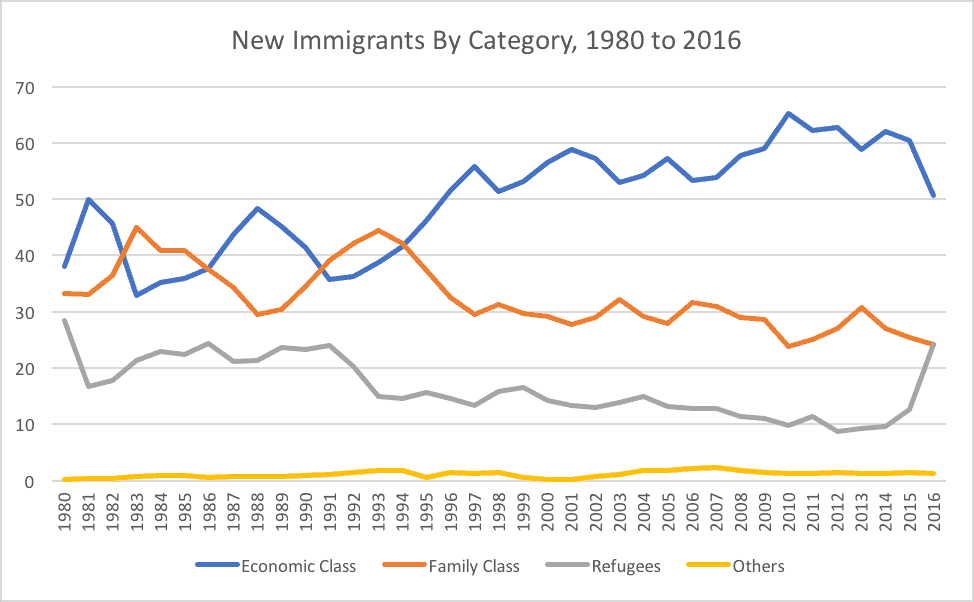 Figures from the 2016 Census also revealed how the different admission classes by which immigrants have found their way to Canada.

The overall trend away from the Family Class and towards the Economic Class is show by the figures, with the spike in refugee numbers caused by the federal government’s push to welcome more than 40,000 Syrians also having a clear affect on the numbers.

The six in 10 economic immigrants takes into account principal applicants as well as their families. Half of recent economic immigrants came through skilled worker programs, while a quarter were admitted through provincial and territorial categories, showing the growing importance of more local-level programs.

Family Class immigrants represent roughly 30 per cent of recent newcomers, with refugees accounting for 10 per cent, although that number spiked to 24.1 per cent between January and May 2016.

Jump back to 1983 and only just over 30 per cent of immigrants came through economic avenues, with 45 per cent in the Family Class and more than 21 per cent refugees. This shows how the distribution of immigrants has changed over the years as government immigration policy has shifted. 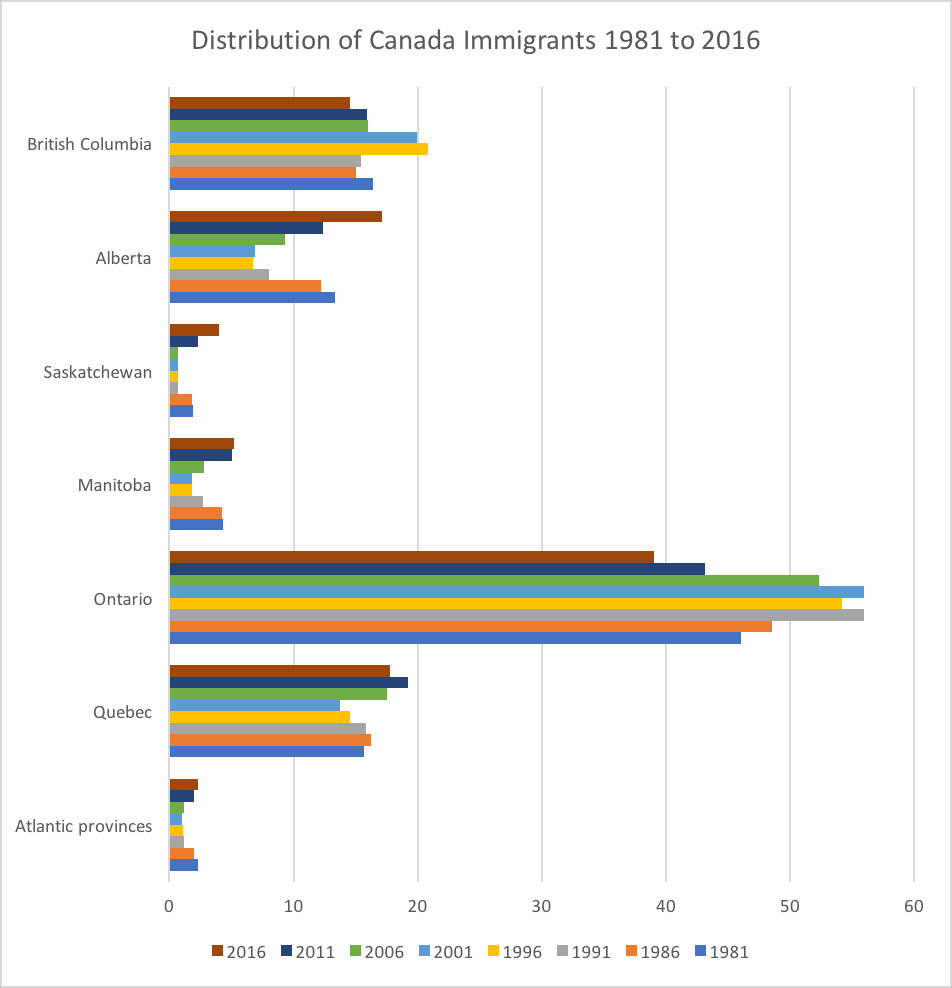 While the numbers show that Ontario, Canada’s most populous province, has dominated immigration among the provinces since 1981, a trend is emerging towards greater immigration in the Prairies and Atlantic provinces.

New immigrants living in Alberta rose to 17.1 per cent in 2016, compared to 6.9 per cent of the total in 2001. The current percentage is greater than British Columbia (14.5 per cent). Meanwhile, the same period saw Manitoba’s share jump from 1.8 per cent to 5.2 per cent and Saskatchewan’s from less than1 per cent to 4 per cent.

The numbers were lower in the Atlantic provinces of Nova Scotia, Newfoundland & Labrador, New Brunswick and Prince Edward Island, but the trend was still present. The four provinces accounted for 2.3 per cent of all recent immigrants in 2016, the share more than doubling since 2001 with each province receiving its largest ever number of new immigrants.

Meanwhile, Ontario, which accounted for 55.9 per cent of new immigrants back in 2001, received 39 per cent of recent newcomers in 2016, showing how the trend is adjusting.

The 2016 Census data also reveal where new immigrants are coming from, with Africa ahead of Europe for the first time as the second most popular source.

The number of recent immigrants born in Africa was 13.4 per cent of the total in 2016, up from 3.2 per cent in 1971. The most prolific African source countries were Nigeria, Algeria, Egypt, Morocco and Cameroon.

Newcomers from the Americas and Oceania represented 12.6 per cent and 0.7 per cent, respectively, of recent immigrants to Canada, the data showed. 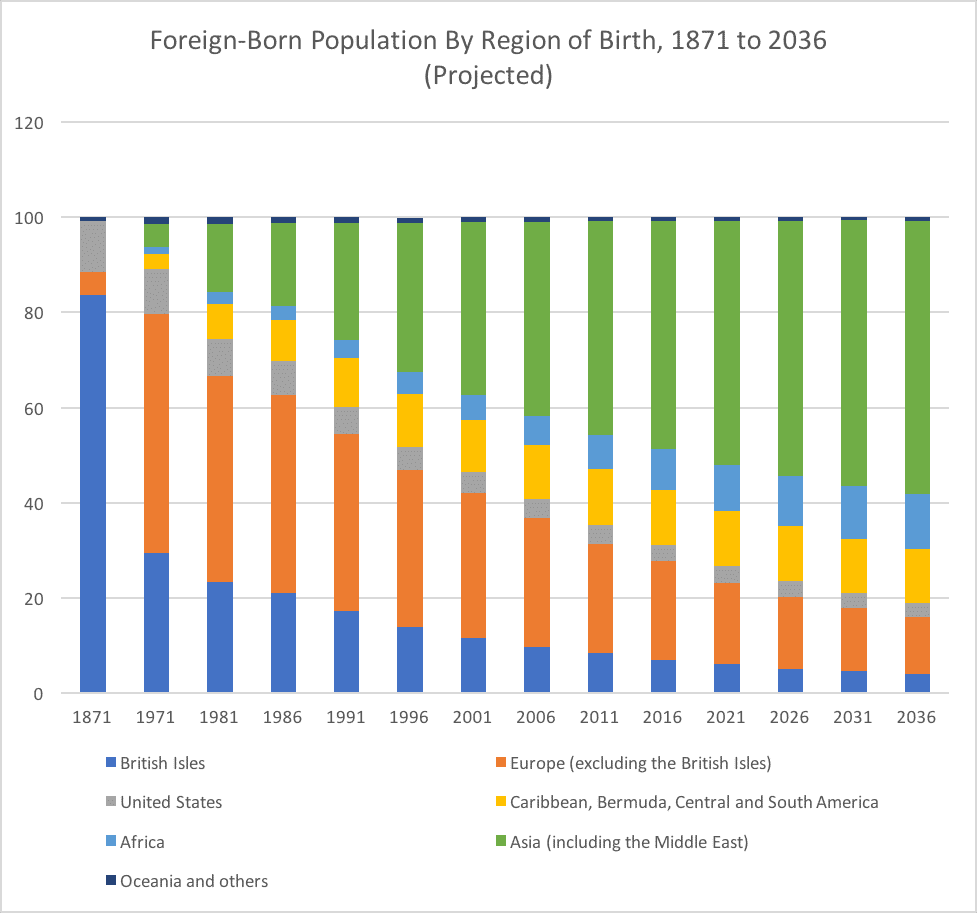