February 3, 2017 — Nova Scotia has seen a significant increase in immigration in recent years, and Premier Stephen McNeil says the province has a brighter future because of it.

The province welcomed more than 4,500 new immigrants in the first three quarters of 2016, already more than both the previous two full years.

Although these numbers were boosted by the intake of Syrian refugees, McNeil also points to numbers doubling in both the Nova Scotia Provincial Nominee Program and through the federal-level immigration programs. 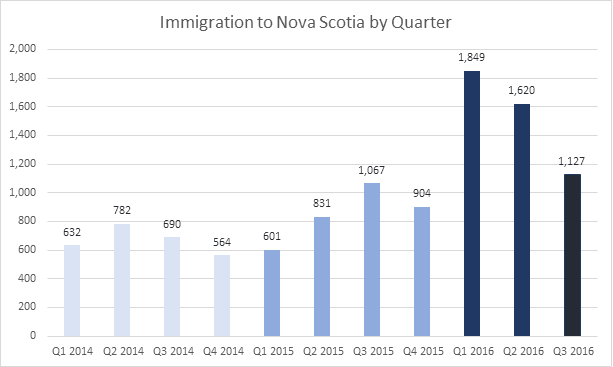 The province is set to see more immigrants arrive in 2017 with the start of the Atlantic Immigration Pilot, covering Nova Scotia, as well as Newfoundland & Labrador, New Brunswick and Prince Edward Island.

The pilot, which will open in March 2017, will include programs for high-skilled and intermediate-skilled workers, plus international graduates.

Up to 2,000 new immigrants will be accepted across the four Atlantic provinces under the program.

The pilot is employer-driven, meaning candidates will require a job offer from a designated business in one of the Atlantic provinces. However, that employer will not require a Labour Market Impact Assessment (LMIA), which should significantly streamline the application process.

A key requirement of the pilot is the completion of a needs assessment and settlement plan before immigration, informing the candidate and the candidate’s family about the community they are moving to, and where they can get help once they have arrived.

Under the international graduate program, candidates must have graduated from a publicly-funded university in one of the four provinces, as well as have a job offer.

Retention of immigrants in the more rural provinces is not a new problem for Canada, so if the current lawmakers are going to solve it, they need to think innovatively.