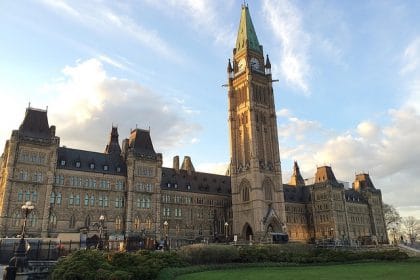 Sep 29, 2018 – Consistency of minimum Comprehensive Ranking System (CRS) scores was the most remarkable feature of the Canada Express Entry draws taking place in the third quarter of 2018.

The six all-program draws that took place in July, August and September, saw a CRS score range of just two points, between 440 and 442.

It shows how the Canada Express Entry system is maturing in terms of the standard of profile in the pool and the number of Invitations to Apply (ITAs) being issued.

In terms of ITAs, the third quarter saw the most of 2018 and the third most for a quarter of all time, with 22,800 candidates invited to apply for Canada immigration.

It also saw the milestone of the 100th Express Entry draw, coming 45 months after the system was launched in January 2015.

How Minimum CRS Scores Have Become More Consistent Than Ever

Taking the CRS scores for the whole of 2018, shown by the orange line in the graph below, the line is essentially flat.

The third quarter saw three consecutive draws where the minimum score was 440, the lowest of the year so far.

The two deviations in draws 11 and 20 were for program-specific draws designed to target lower-scoring Federal Skilled Trades Program candidates. 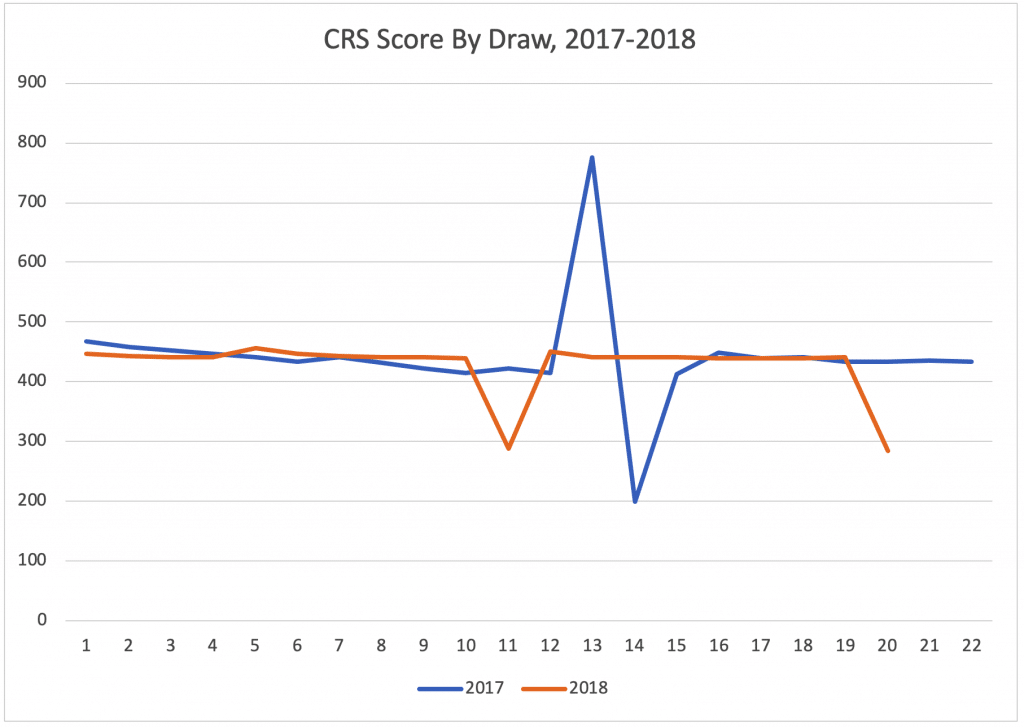 Similar analysis can be made of the blue line representing 2017 CRS scores, with only program-specific draws 13 (Provincial Nominees) and 14 (Skilled Trades) deviating from the flat line.

Growing Numbers of ITAs Issued Throughout 2018

This bucks the trend seen in 2017, when larger draws were seen earlier in the year, but there was considerable drop-off in the second six months. 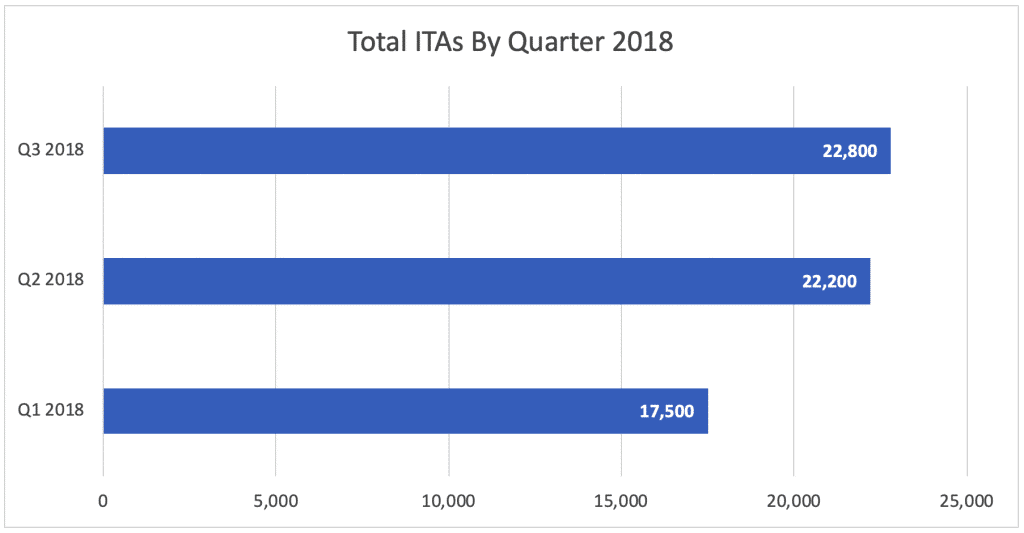 Given Canada now has a three-year immigration levels plan to work towards, it becomes clear as to why large draw numbers can continue later in the year.

Candidates invited in the second half of the year are unlikely to arrive in Canada until the first two quarters of 2019.

But as immigration officials already know precisely the target number of immigrants for 2019, they can continue to issue ITAs with confidence.

During 2017, Immigration, Refugees and Citizenship Canada (IRCC) also needed to establish a bank of candidates who had received ITAs. 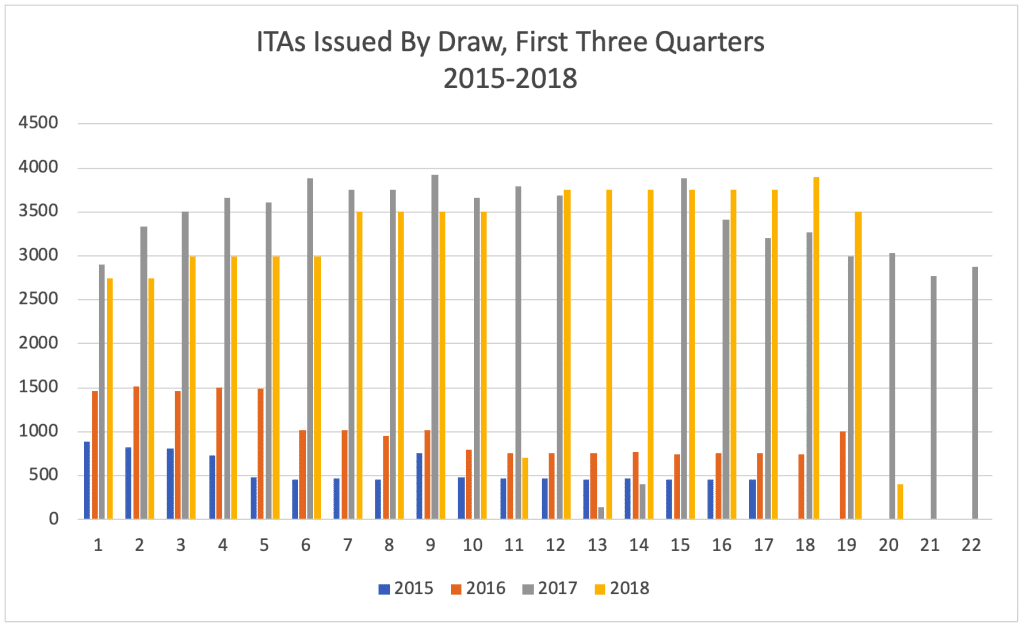 This was because 2017 was the first year Canada’s entire federal economic immigrant intake was handled through Express Entry.

In previous years there had remained a backlog from pre-2015, when economic immigration was done on a first-come, first-served basis.

The final all-program draw of the third quarter saw the number of ITAs drop from 3,900 to 3,500. This suggests IRCC officials knew a program-specific draw was being planned, hence they opted for a slightly smaller all-program draw. 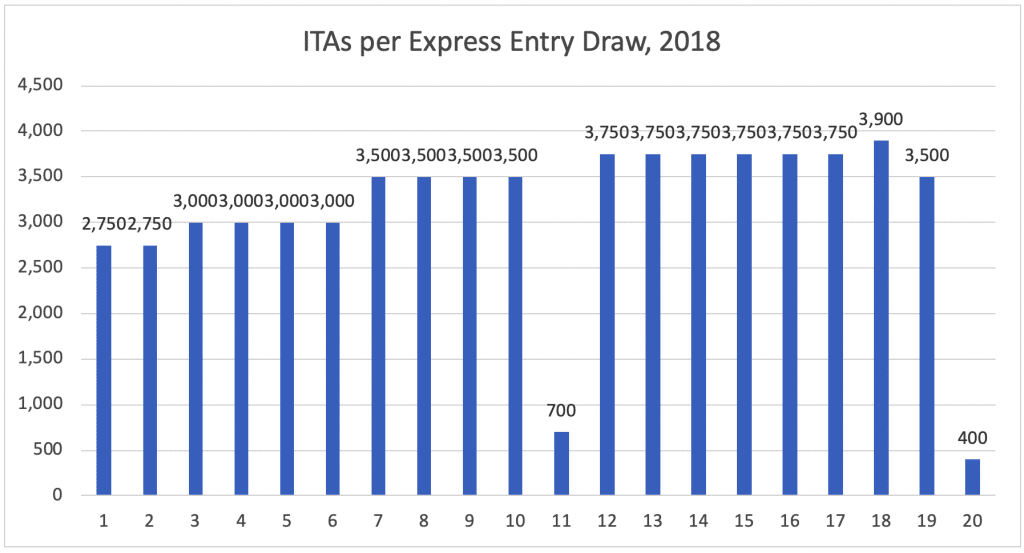 Here, the importance of the IRCC’s power to set exact draw sizes is shown, as the number of ITAs can be adjusted accordingly.

Previously, there was no way of separating profiles with the same CRS scores.

Now, this is done based on the date the profiles were submitted, meaning officials can decide exactly how many ITAs they want to issue.

Under the old system, dropping the minimum CRS score by one point could see hundreds more candidates given ITAs.

The third quarter of 2018 saw the third highest number of ITAs issued in Express Entry history, beaten only by the first two quarters of 2017.

This illustrates how sharply the numbers dropped off in the latter part of 2017. 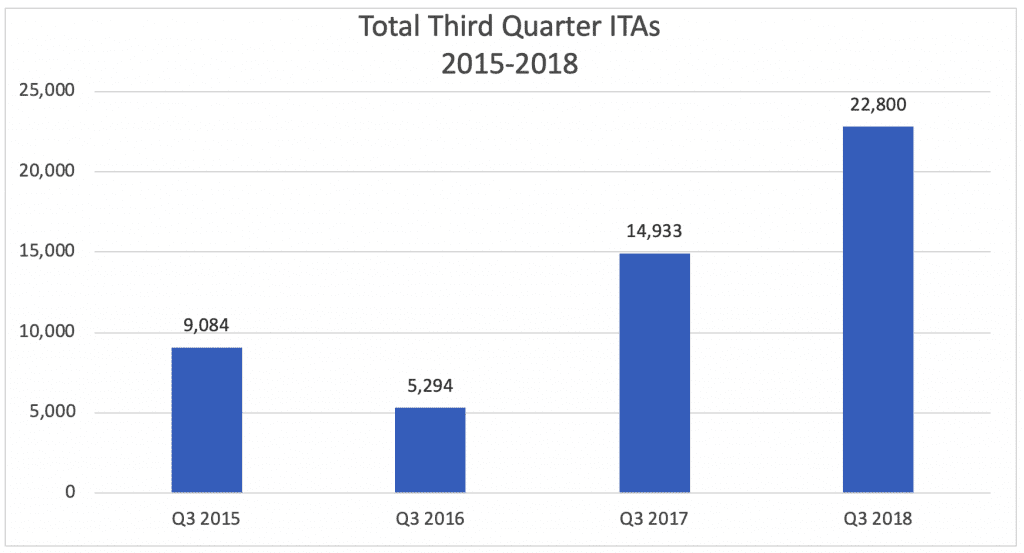 It should be expected that the gap between the two will close by the end of the year, although it remains to be seen whether the 2018 total can eclipse the record set last year. 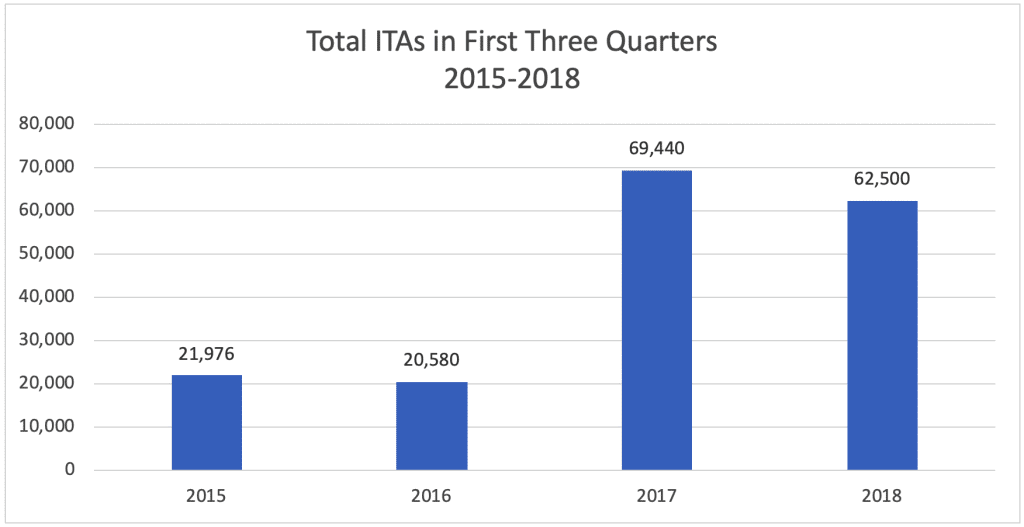 Previous years have seen a drop-in draw sizes in the latter months in anticipation of the federal government immigration levels announcement.

This usually happens in early November, but 2017 saw Ottawa take the rare step of announcing a three-year immigration levels plan.

There may be adjustments made when Immigration Minister Ahmed Hussen speaks to parliament in late October or early November, but it is unlikely the figures will see any major change.

Hussen may also look to give an immigration levels target extending as far as 2021, continuing the three-year trend.

For Express Entry candidates, it means plenty of opportunity to secure that coveted ITA for Canada immigration.

There is plenty of incentive to maximize CRS scores to further advance an immigration project.

How Immigration.ca Can Help Candidates Move to Canada

At immigration.ca we offer our international clients top to bottom assistance in both immigration and employment.  We provide individual clients with extensive legal counsel drawing on our more than 60 years of in-house combined professional experience.

We will empower you on how to raise your profile including your CRS score in the Express Entry Pool.

We do this by giving our clients extensive contacts to 500 Canadian employers, conducting a comprehensive job search which includes a live face-to-face tutorial on how to harness the power of LinkedIn, and revising their digital, online profiles to maximise their hiring opportunities.

In short, we teach you how to find a job in Canada from overseas.

If you are an employer looking to recruit foreign talent from abroad, immigration.ca can help. Access our expertise through our in-house recruitment enterprises, www.grnmontreal.com and our newest asset, www.skilledworker.com, “the leader in foreign recruitment”.

From technology workers in British Columbia, Ontario and Quebec, long-haul truck drivers in the Prairies and doctors in Nova Scotia we are able and ready to help with your search for the right staff to get your business grow.