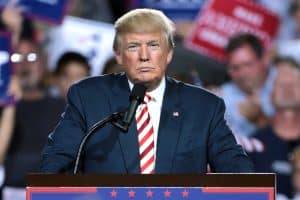 The new rules will go into effect on October 18, 2017, impacting citizens of the following countries: Chad, Iran, Libya, North Korea, Somalia, Syria, Venezuela and Yemen. The previous 90-day travel ban was due to expire on September 24, 2017.

While some of the countries covered by the new proclamation face an indefinite visa ban for all their citizens, more targeted restrictions impact others. The Venezuelan part of the ban, for example, suspends non-immigrant visas only for certain government officials and their families. A breakdown of how citizens of the eight countries are affected is included at the bottom of this article.

“We will not admit those into our country we cannot safely vet,” Trump tweeted after signing the new proclamation.

How The Travel Ban Drama Unfolded

The new rules have been more carefully considered than the original Trump travel ban, which sparked chaos because of a lack of guidance on how it should be implemented. It came into effect immediately on the signing of an executive order, meaning there were people on flights whose U.S. immigration status changed while they were in the air. The result was protests at U.S. airports and several legal challenges.

Eventually, Trump gave up on the first executive order, and signed a new one on March 6, 2017, which was again suspended by U.S. courts before it could come into effect.

However, the Supreme Court overruled that decision on June 26, 2017, allowing the ban to partially came into forced for citizens of six countries: Libya, Iran, Somalia, Sudan, Syria and Yemen. The entire U.S. refugee program was also suspended for 120 days. It came with a caveat that the ban only applied to those without close family or business ties to the U.S. There followed several lawsuits trying to establish what constituted a close family or business tie.

The Supreme Court is set to fully consider the legality of the ban during its October session. The new proclamation is expected to further complicate this hearing.

U.S. officials say they have been working for months on the details of the new proclamation, with input from multiple U.S. agencies and foreign government representatives.

Valid visas will not be revoked under the new proclamation, which also leaves room for case-by-case waivers of the rules for citizens from the eight countries who meet certain criteria.

These criteria replace the ‘bona fide ties’ limitation place on the previous ban by the Supreme Court.

Why These Eight Countries?

The U.S. Department of Homeland Security says the eight targeted countries either do not share enough information with the U.S., or do not take necessary security precautions.

A series of security benchmarks were set by the U.S. as a minimum standard, with countries given 50 says to comply with the measures.

An original list of 16 countries failed to comply, which was reduced to eight after information-sharing and security agreements with the U.S.

How The Eight Countries Are Affected