If Left Unchecked, Quebec’s Niqab Ban Risks Redefining Canada As We Know It 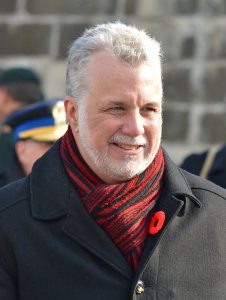 The objective of an anticipated political gain, seems striking. Quebecers face a provincial election in the fall of 2018 and an Angus Reid poll found that one in five Quebecers said Bill 62 would be “one of the most important factors” when it comes to choosing which party to support.

Many question the rationale for a ban on face coverings. Statistics Canada figures confirm that among Quebec’s 8.2 million population, just over 240,000, or under 3 per cent, identify as Muslim. Only a fraction of that number chooses to wear the full-face veil. At most, a few hundred people are the focus of this restriction.

The Quebec niqab ban is being presented as a state religious neutrality law. Yet, for want of a better description, the state is prescribing what Muslim women in Quebec must not wear. They will not be allowed to wear a burka or a niqab when accessing public transport, receiving medical services at a provincial hospital or attending a public library. Students attending publicly funded universities, and parents picking up children from publicly funded daycare centres will also be affected.

The law does not prohibit other articles of faith and would not prevent public servants from wearing large crucifixes, turbans, kippahs or garments worn by followers of other religions, when delivering government services.

Exactly how the law will be implemented when it comes into force in 2018, is unclear, although the Quebec government has recently tried to soften its stand somewhat since the law was passed. Still, it raises concerns, the most serious of which is that applying the law will be delegated to thousands of public service employees to enforce. The Montreal bus drivers’ union has already said it is not the job of drivers to decide who gets on a bus. Controversy arising from inconsistent applications, is certain.

Quebec’s justice minister has said the law will also extend to wearing sunglasses, which raises the question of how this can be about religious neutrality.

The Canadian Charter of Rights and Freedoms guarantees freedom of religion and ensures equality before the law to enjoy these freedoms without discrimination.  It also affirms Canada’s commitment to the preservation and enhancement of the multicultural heritage of all Canadians.

To succeed in a constitutional challenge, an individual plaintiff would need to prove the law interferes with their freedom of religion. This is not as obvious as it seems in that the drafters of the law were quite careful to avoid using reference to a burka or niqab.  Some would suggest that relying on mere inference to religious interference, is insufficient.

However, the Supreme Court of Canada in two decisions emanating from Quebec in 2006 and 2004, have previously clarified that an individual would only need to show belief that their faith requires the wearing of a face covering and that by doing so, their personal and subjective belief in the religious significance is sincere.

These decisions refute the argument that a face covering is not a mandatory religious requirement imposed on Muslim women, as some have asserted, and is thus not a religious interference.

But under our constitution, no right is absolute and if any limitation can be justified, it would be subject to reasonable limits.

This is an area that will give rise to debate.  The motivation behind Bill 62 has everyone asking questions.

Some believe the new law addresses a security issue. The Quebec government, should it decide to rely on this argument, will be required to provide objective evidence that face coverings are a security risk. This will be a tall order.  Few, if any violent incident has ever been reported in Quebec, involving a veil covered individual.

In the UK, the Home Office, Scotland Yard and the National Police Chiefs Council recently considered whether the burqa is really a terror threat, and whether security risks and integration concerns, would justify a ban.  They concluded a lack of compelling statistics would support this policy.

In the absence of hard statistical evidence quantifying a terror threat posed by face coverings in Quebec, a total ban, across a wide range of circumstances as this law provides, would permit the state to intrude on freedom of religion where it cannot be reasonably justified.  This according to the reasoning in a 2012 Supreme Court of Canada decision, is inconsistent with the premise on which our Charter is based – and requires a generous approach to defining the scope of the rights it confers, coupled with the need to justify intrusions on those rights because of conflicting interests or the public good.

In truth, technology through wide scale use of portable metal detectors and biometric retinal scans in the future, will provide far more reliable security.

Even if the law’s objective can be established as pressing and substantial, it will be difficult to meet the rational connection test, requiring that the law achieves its objectives, through minimal impairment of religious freedoms protected under the Charter.

The government must also address the “overall proportionality” test between the law’s positive and negative effects. Whether it is reasonable to require burka wearing women to choose between their religion and receiving funded services.

The premise recently voiced by Premier Couillard “A covered face isn’t only about religion. You speak to me, I should see your face and you should see mine. It’s as simple as that”, is far too general and simplistic to justify the vast scope of this prohibition.

The passing of the Charter of Rights and Freedoms in 1982, recognized as a great accomplishment worldwide, coincided with the beginning of the 1980’s when visible minorities increased dramatically in Canada under robust immigration policies.  Since then, our population has become more diverse and the Charter has become the instrument with which to interpret and articulate our national values, through balanced dialogue, engagement and qualified accommodation.

Quebec’s new policies likely infringe on these established principles.  If left unchecked, they risk redefining Canada for all Canadians, as we know it.