‘You’re Fat, That’s Why Your Joints Suck’: How International Doctors Struggle to Adapt to Canada

A doctor who made a patient cry by telling them ‘you’re fat, that’s why your joints suck’ is just one of the examples of how cultural differences cause problems for international medical professionals who come to Canada. 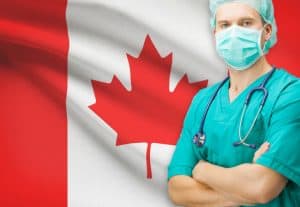 In another case a physician was left in tears after being told he was to deliver a baby having never seen a naked woman.

From complete ignorance of confidentiality laws to refusing to shake hands with patients from the opposite sex, a new report recommends lessons on Canadian culture should be included in the training of foreign doctors who come here to work.

The University of Alberta paper says that while these doctors are highly educated, have excellent knowledge and experience and bring a fresh cultural perspective, they also have shortcomings that must be addressed in order to integrate them into Canadian medical practice.

Experts who carried out the study, entitled ‘Cultural Transition of International Medical Graduate Residents into Family Practice in Canada’, conducted interviews with both Canadian physicians training the foreign doctors, and the doctors themselves.

“I watched an IMG [international medical graduate]…he’d be like, you’re fat, that’s why your joints suck, and the patient started to cry because nobody says that stuff here, but he had trained in a different country that was maybe more direct,” one Canadian physician told the interviewer.

Another recalled a story of when a well-experienced international doctor assigned to obstetrics was assigned to deliveries.

“… he was in tears saying he did not know what to do … he had never even seen a lady with her clothing off and here he was expected to do a delivery,” the Canadian doctor said.

Then there was the senior health professional who was ignored for a year because she was a woman.

“… it took probably a good year for them to realize that women had status and that if they wanted to get anything done that they would have to talk to me,” she said.

The report concludes work needs to be done on both sides to better manage the integration of foreign doctors who come to Canada.

“Both residency training programs and IMGs themselves have a role to play in addressing these challenges,” the report says.

“Residency programs must recognize the challenges that can occur during the cultural transition to Canadian family practice and incorporate Canadian medico-cultural education into the curriculum.

“IMG residents also need to be aware of the cultural differences that may exist and be open to different perspectives and new ways of learning.”

About a quarter of Canada’s doctors graduated from universities outside North America.

A Canadian Medical Association report says the top five countries sending doctors to Canada in 2012 were South Africa, India, Libya, the US and Pakistan.

Quotes from the University of Alberta study:

“…[some] are so soft-spoken, you combine that with the accent and then they don’t make the good eye contact, it’s a huge challenge to really figure out what they’re saying, both from a colleague perspective or a patient’s perspective.”

“… I’ve worked with a number of IMGs that find it really frustrating that somebody will come in for a simple cold or a cough ‘cause that’s certainly not what they would have seen before.”

“I can recall one instance where a resident who was quite experienced in his own discipline … first rotation assigned was obstetrics … on that first night in obstetrics he was on call and he called the friend who was not on call … he was in tears saying he did not know what to do, he’d been sent into the delivery room to take care of deliveries … and he had never even seen a lady with her clothing off and here he was expected to do a delivery.”

“… in a lot of countries there are diseases that don’t exist…depression doesn’t exist. Many of the mental health issues don’t exist, addictions aren’t there. And it’s not that they’re not there, but people will never bring them up as an issue, so if someone’s depressed they never would agree that it’s a medical concern and they’d never be treated for it … There’s no anxiety disorder, there’s no panic attacks, there’s no depression, there’s no alcoholism. There’s no suicide, even though there’s lots of people that commit suicide, it’s all accidents.”

“… from a legal and technical point of view [there] have been instances where there wasn’t an understanding of what confidentiality was.”

“They would totally almost ignore me, and it took probably a good year for them to realize that women had status and that if they wanted to get anything done that they would have to talk to me.”