May 4, 2018 – Canada lost two thirds of recent software engineering graduates from its top universities to the United States, according to a new study.

The alarming figures suggest Canada has a long way to go in reversing the flow of talent out of the country.

It found overall that one of four graduates from these subjects – seen as central to economic growth – are working outside Canada. Leading the way were software engineering graduates at 66 per cent, followed by of computer engineering (30 per cent), computer science (30 per cent) and engineering science (27 per cent). 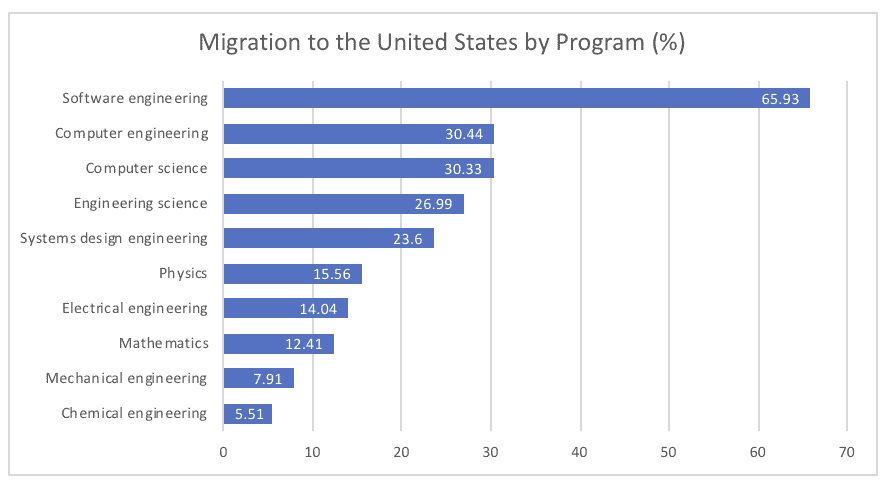 “While we see some human capital talent migration across STEM fields, it is highest in programs directly related to computer science and engineering. The United States is the main destination of choice for those who seek work abroad, with large American multi-national technology firms the main beneficiaries.”

The study makes some key recommendations on how Canada can hold on to its technology talent, ranging from increasing salaries to compete with the U.S., to ensuring co-op placements are with Canadian firms. From a government point of view, the report calls for increased funding for research and development.

One key factor to consider from the study is that it focuses on graduates from 2015 and 2016. Since these years, there has been a major shift in the political landscape in the U.S., with Donald Trump elected president and enacting protectionist, anti-immigration policies.

Early analysis suggests this has not only made the U.S. harder to access for the best talent from all over the world, including Canada, but also less attractive to the brightest, in-demand graduates who often have their pick of countries to move to.

It has been widely reported that the U.S. H1-B visa for skilled workers has become deliberately bogged down in red tape, with candidates who would have sailed through in the pre-Trump era now finding their applications stalled.

The renegotiation of NAFTA is also of key important to the brightest Canadian graduates. Under the treaty, Canadians have priority access to Treaty NAFTA work visas, which could be taken away depending on how the renegotiation progresses.

Canada’s federal government has taken a number of steps via immigration policy to try and attract both foreign technology talent and international graduates here in the last 18 months.

The new Global Talent Stream, launched in June 2017, features standard 10 working day processing, gives employers a timely, responsive and client-focused service via a referral or if hiring for a position included on the Global Talent Occupations List

To attract more international graduates to stay and build careers in Canada, the government has introduced points under Canada Express Entry. In November 2016, Comprehensive Ranking System points were added for three-year post secondary, master’s, professional degrees and doctorates (30 CRS points) and post-secondary diplomas lasting one or two years (15 CRS points). No points are awarded for a Canadian high school education or below. This gives many graduates the extra push they need to achieve a coveted Invitation to Apply.