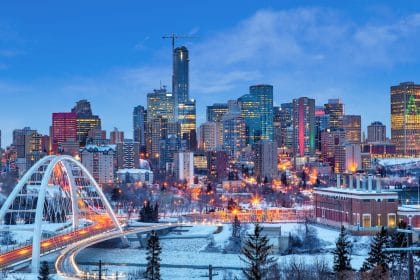 Cumulative figures for the first six months of the year reveal 41,800 Invitations to Apply (ITAs) were issued through the skilled worker selection system, compared to 39,700 in 2018.

Canada went on to break the annual record last year, issuing a total of 89,800 ITAs. However, it should be noted that draw sizes significantly increased in the second half of 2018, making it by no means certain the 12-month record will be broken in 2019.

By far the most prolific first half on record came in 2017, when 54,507 ITAs were issued as Canadian immigration authorities looked to establish a bank of profiles in the Express Entry pool.

Draw size and frequency dropped off significantly in the second half of 2017 after that bank had been established. 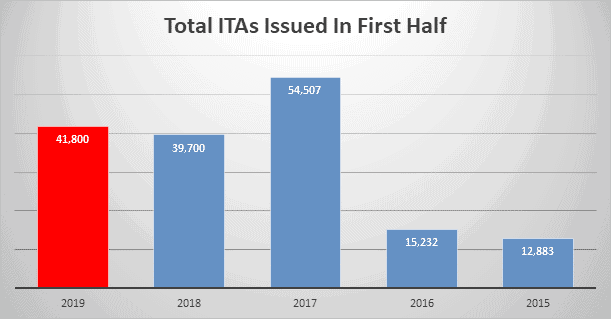 This is an indication that the Express Entry system has settled, with officials at Immigration, Refugees and Citizenship Canada (IRCC) well aware of how the number of invitations issued relates to the arrival of new immigrants.

Canada has a high-skilled immigration target of 81,400 for 2019, a figure that is set to rise steadily over the next three years. As the target rises, so will the number of ITAs issued, but in a more steady and measured way than in previous years. 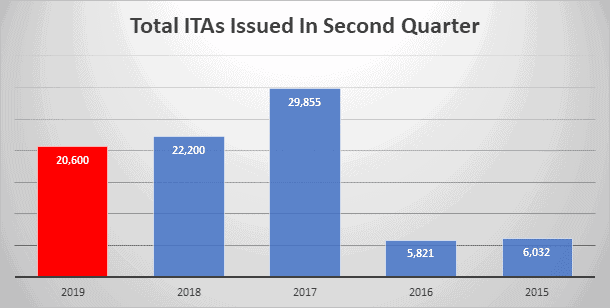 Overall, the second quarter of 2019 was the seventh most prolific on record in terms of ITA numbers.

The record for the most ITAs issued was set in the second quarter of 2017, when 29,855 candidates received invitations.

The program specific Skilled Trades Program draw feature during the quarter partly explains why the total was lower.

On important statistic in which the first half of 2019 leads the way is on average draw size.

In 2017, there were significantly more ITAs issued, but also 17 individual draws, accounting for the lower average draw size of 3,206. 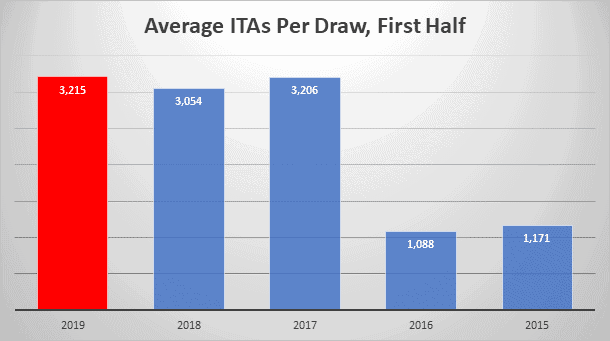 The impact of the extra draws that took place in 2017 is shown in the graph of invitations issued per draw.

It shows how the extra four draws conducted by this point two years ago effectively gives 2017 a head start of 10,000 invitations on every other year.

However, it is noteworthy that July 2017 featured no Express Entry draws, the first month since the system was launched in January 2015 that not a single draw took place in a calendar month.

The chart below also shows how consistency of draw size has been a standout feature in 2019, with 10 out of 12 all-program draws seeing 3,350 ITAs issued.

It remains to be seen whether IRCC will deviate from this pattern, made possible by the introduction of the tie-breaking rule, in the second half of the year. 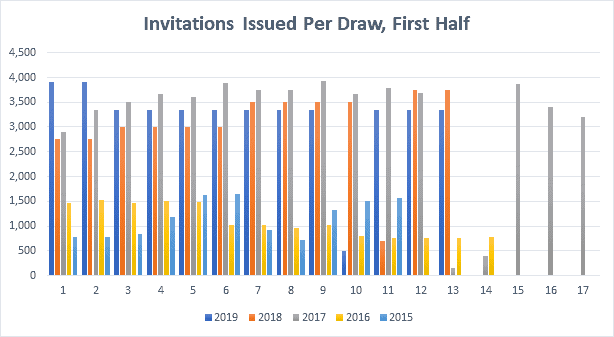 In terms of minimum Comprehensive Ranking System (CRS) scores, a pattern has also emerged in the second quarter when comparing the results for the last four years.

While the first quarter has seen scores much closer together between 442 and 468, the second quarter has seen more of a spread, ranging between the record low of 413 and 534 for all-program draws.

The trends for each year are also more established come the second quarter, with the CRS scores for 2019 clearly higher than both 2017 and 2018. In the first quarter, there is less clarity on which scores are higher. 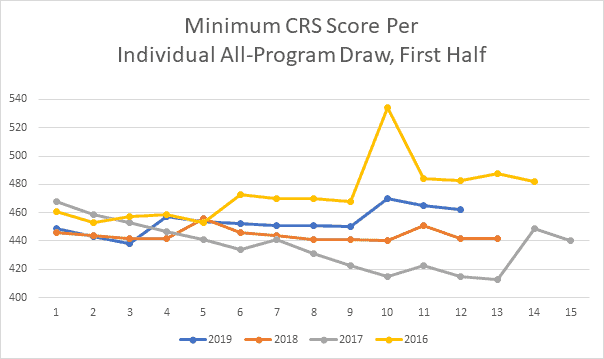 This is indicative of the slightly smaller draw sizes seen in 2019 as well as more time left between all-program draw on two occasions.

However, it also shows that the standard of profiles in the pool has steadily risen over the last three years, with 2017 marking the point when Express Entry became effectively the only way to qualify for a federal high-skilled economic immigration program.

Previously, IRCC had been clearing the backlog left under the old system. 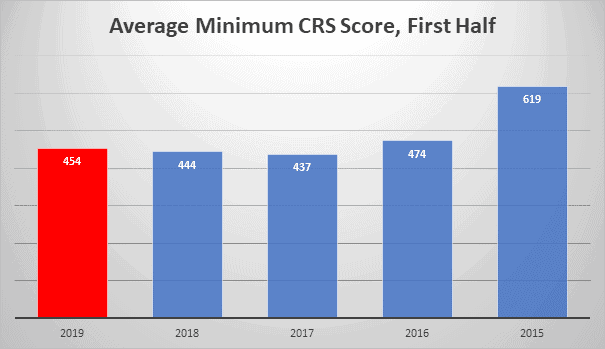 It remains to be seen whether the ITA record of 2018 will be broken in 2019, although given the high draw sizes seen in the second half of last year, it seems unlikely at the half way stage.

What is almost guaranteed is that regular draws featuring ITA totals well over 3,000 will continue.

It seems IRCC has settled on 3,350 as its preferred draw size for the time being. Only if it breaks this trend, or conducts draws more frequently than every two weeks, will the 2018 ITA record be broken.

In terms of minimum CRS scores, the important factor is the amount of time left between draws.

Twice in the first half, IRCC has left more than two weeks between all-program draws, and on both occasions the gap had the affect of increasing the minimum CRS score.

With regular draws of 3,350 IRAs every two weeks, we can expect the minimum CRS to drop slightly with each draw, although nothing can be guaranteed.

The second half of 2019 also features a Canadian federal election, which could have its own impact on the Express Entry system.

The incumbent Liberals have already set out their plan to increase immigration in the coming years, but should the opposition Conservatives return to power, it remains to be seen how that could impact annual immigration numbers.

Any changes would clear have a knock-on impact on the Express Entry system.