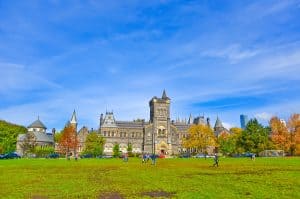 May 2, 2018 – Canada and Ontario have moved to build on an immigration agreement signed in 2017 with three major extensions, aimed at francophone immigration, partnerships with municipalities and international students.

The move comes as Canada’s largest province has boosted the use of its provincial nominee program, receiving an increased allocation of 6,600 immigrants in 2018.

Federal Immigration Minister Ahmed Hussen and his provincial counterpart Laura Albanese have signed three annexes to the original immigration agreement, which forms the framework of the federal-provincial relationship over the next five years.

The French-Speaking Immigrants Annex is aimed at boosting the number of francophone immigrations being brought in to Ontario.

The Canadian government has targeted a 4.4 per cent boost in the number of French-speaking immigrants by 2023. Meanwhile, Ontario has its own target of making francophones 5 per cent of all immigrants.

A recent meeting in April saw a Federal, Provincial and Territorial Action Plan put together for increasing francophone immigration outside Quebec.

Ontario already runs a French-Speaking Skilled Worker Program, which selects francophone candidates from the Express Entry Pool for immigration. Nearly 400 candidates have been invited to apply through the program in 2018.

Ontario is home to 622,415 Francophones, the largest population in Canada outside of Quebec.

Ontario’s smaller communities are struggling with a shrinking labour market just like many of the smaller provinces.

In Ontario, the vast majority of immigrants choose to settle in the Toronto are, leaving smaller communities fighting to attract and retain newcomers.

The Partnership with Municipalities Annex looks to address this, but helping smaller communities attract more immigrants, and also retain and integrate them.

Northern Ontario mayors recently issued a joint call for a similar program to the Atlantic Immigration Pilot to be implemented in their region. The AIP has a particular focus on integration and retention, with candidates needing a settlement plan, job offer and provincial endorsement before they qualify for immigration.

International students who graduate from Canadian institutions have emerged as key new immigrants under the current federal government.

With their existing knowledge of Canada and its official languages, possession of Canadian qualifications and often work experience, they have already completed much of the integration required to make a successful life here.

The Canada-Ontario International Students Annex looks to build on this by looking at ways to welcome more international students to the province.

To be eligible to apply for the PhD Graduate Stream, you must meet the following criteria:

To be eligible to apply for the Masters Graduate Stream, you must meet the following criteria: