May 8, 2019 – Canada is one of the foremost countries in the world for millionaire immigrants to move to, a new study shows.

The New World Wealth report reveals Canada gained 4,000 high net worth individuals (HNWIs) in 2018, the third most of any country in the world.

Canada slots into third place behind Australia in first, which gained 12,000 millionaires, and second-placed USA which gained 10,000.

At the other end of the scale, China heads the list of countries that lost the most millionaires last year, at 15,000. Russia (-7,000) and India (-5,000) also saw significant outflow of millionaires. 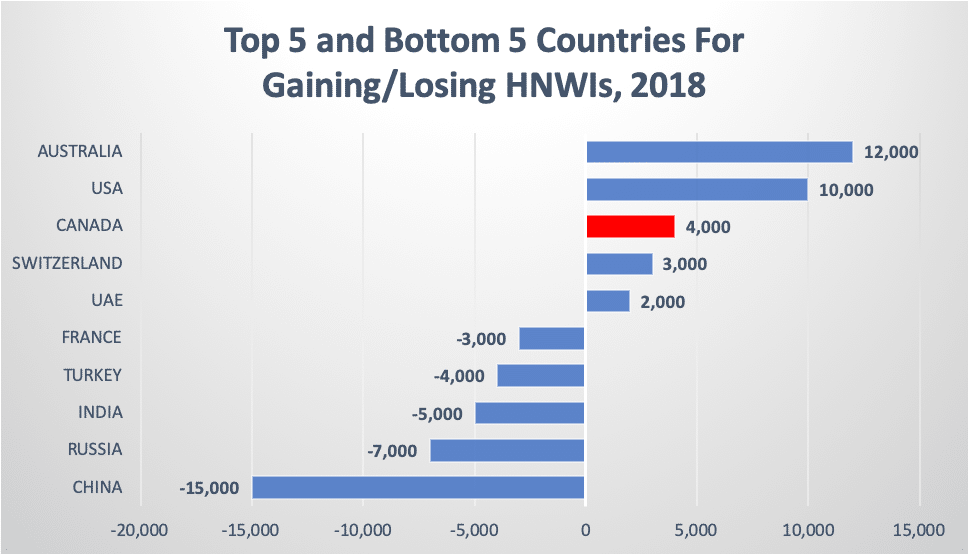 The report reveals Canada is home to more than 350,000 HNWIs, giving it the eighth highest population of millionaires in the world.

Unsurprisingly, the US is home to the most HNWIs, with a total millionaire population approaching five million.

Japan, China, the UK and Germany round out the top five countries in terms of population of millionaires.

Present conditions such as stability, business opportunities and crime rates are some of the top reasons why millionaires choose to leave their countries, and why they move to their country of destination.

The reports authors also suggest the departure of the wealthy can be a sign of difficult times to come. The UK, for example, lost 3,000 millionaires in 2018, as high net worth individuals consider their options with the turmoil of Brexit looming.

Important factors that put Australia top of the list for attracting millionaires include its safety, economic stability and lack of inheritance tax, plus its business links to Asian countries such as China, Japan and South Korea.

The increasing prevalence of investment immigration programs offers many options to HNWIs looking to emigrate.

Canada has several options for business immigration, the most popular of which is the Quebec Immigrant Investor Program (QIIP).

The QIIP is the only passive investment immigration program leading to Canadian permanent residence.

HNWIs also have the option of buying a business and moving to Canada under the federal owner-operator rules.

A two-stage process sees candidates enter Canada on a work permit before applying for permanent residence under an existing immigration program, for example Express Entry.

The owner-operator policy is not a formal immigration program. Rather, it is a work permit issued under the federal Temporary Foreign Worker Program (TFWP). There is no annual quota on the number of work-permits that can be issued.

To qualify as an owner-operator, the foreign investor must have:

Several of Canada’s other provinces also operate two-stage entrepreneur immigration programs which see candidates initially arrive on a work permit, before qualifying for permanent residence once the terms of a business agreement have been met.