Wages for Immigrants to Canada Rising, But Still Below Those of Canadians

“The median entry wage for immigrants admitted to Canada in 2017 was the highest to date, reaching $30,100 in 2018,” state the authors of the report by Canada’s statistical services agency.

A median wage is sometimes considered to be more representative of a situation than an average wage. An average wage is the total of all the wages for a group of people divided by the number of people in that group.

But a median wage is the income in the middle of a range of wages ranked from lowest to highest for a set group of people.

In Canada, that median wage for immigrants has grown steadily since the arrival of Canada’s Express Entry system six years ago and the subsequent rise in the percentage of immigrants who move to Canada under economic programs.

In 2016, only 52.6 per cent of new permanent residents to Canada came to the country through economic programs. By 2018, that had steadily increased to just over 58 per cent on a growing base of new arrivals.

“In recent years, the profile of immigrants admitted to Canada has changed,” notes Statistics Canada.

As a bigger chunk of immigrants became new permanent residents through the Express Entry system in the past few years, more of them were also subjected to that system’s requirement for a Labour Market Impact Assessment (LMIA).

In an LMIA, the impact on the local market of the immigrant taking a job is indicated.

And to make things fair for newcomers, the LMIA process usually requires that the applicant’s job offer letter show he or she will be paid at least the same amount as the median wage for Canadians in such positions.

The trend towards more immigrants coming to Canada under economic programs also means more of them are arriving with Canadian work experience – and that helps them command higher wages.

“Compared with previous years, more immigrants admitted in 2017 had pre-admission experience in Canada, such as having held a work or study permit or having claimed refugee status before admission,” notes Statistics Canada.

When immigrants snag a work permit and come to Canada with previous work experience, their salaries are typically even higher than the median wage for Canadians.

That’s higher than the Canadian median wage that year.

But it’s not all immigrants who are commanding those higher salaries. Immigrants who came to Canada without pre-admission experience had a median wage of only $22,600, far less than the Canadian median wage.

“While immigrants with study experience only have a lower median entry wage, they tend to be younger than immigrants with other types of pre-admission experiences and may continue studying after admission, which contributes to strong wage catch-up over time,” reports Statistics Canada.

Big factors in helping newcomers land higher wages in Canada are knowledge of the country’s two official languages and their ability to get their foreign credentials recognized by Canadian employers.

The importance of those two factors in securing higher wages both upon arrival and a decade after being in Canada becomes immediately apparent when looking at which newcomers command the highest and lowest salaries by their country of origin. 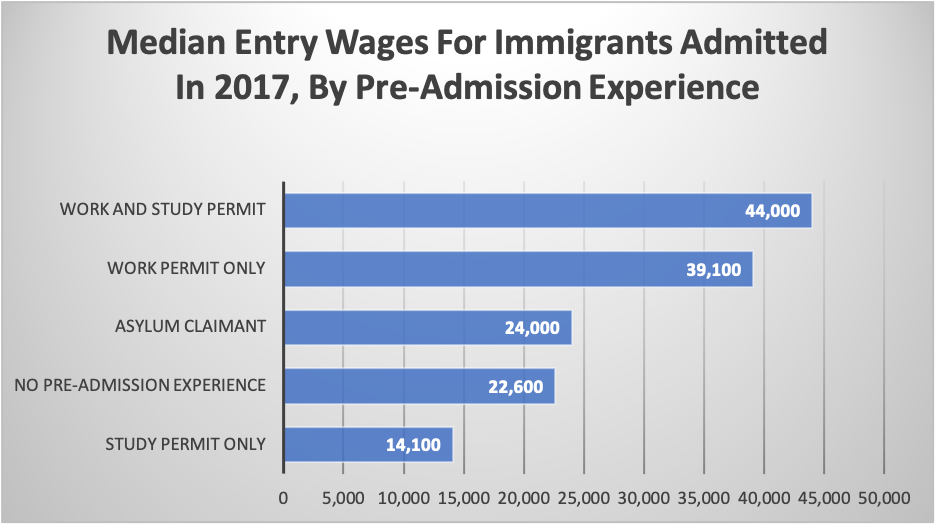 Low starting wages upon arrival to Canada, though, are only that. A starting wage. Many immigrants to Canada substantially increase their earning power over the years. 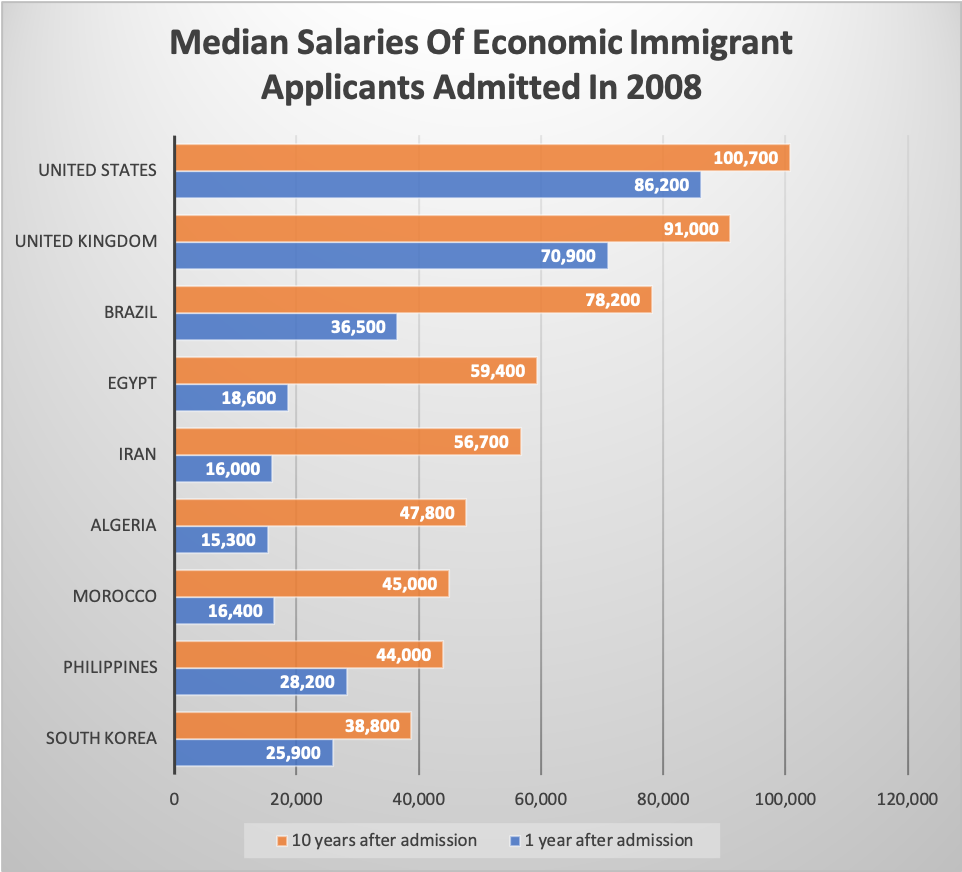 “In 2018, economic immigrant principal applicants from the top source countries of immigration over the last 10 years all reported median wages exceeding the Canadian median wage of $37,400,” notes Statistics Canada.